One year ago, on Sept. 30, 2014, the CDC confirmed that Thomas Eric Duncan had Ebola. He was the first person diagnosed with the deadly virus on American soil.

During his stay at Texas Presbyterian Hospital in Dallas, two nurses also contracted Ebola. Duncan died, but the nurses survived, as did a handful of Americans who fell ill in West Africa but were transported back to the U.S. for care.

The Ebola outbreak in West Africa, and its spillover into the U.S., launched a national media frenzy and forced hospital officials to take a hard look at their readiness for a serious epidemic.

By February, four months after Duncan died, the CDC had designated 55 hospitals nationwide as future “Ebola treatment centers.” Two are in Texas: UTMB in Galveston and Texas Children’s Hospital in Houston. Many of the 55 hospitals renovated rooms and increased training and simulations for staff in case of an outbreak.

But Texas Children’s has built an entirely new unit, an eight-bed biocontainment wing at its facility in suburban Houston.

“After the case in Dallas a year ago, we knew there would be a need,” said Dr. Judith Campbell, medical director for infection control and prevention at Texas Children’s. Campbell helped design the isolation unit, which the hospital began planning to build last fall after Duncan’s death. The $16 million project was paid for out of the hospital’s capital funds and $1 million in donations.

“A year ago in the United States, there were only twelve beds for the entire country for patients that had a need to be isolated in a biocontainment unit. And not surprisingly, zero of those beds were designated for children,” she added.

In the special pediatric unit, each of the eight patient rooms has an antechamber, where doctors and nurses put on protective gear, gloves and ventilated hoods. After treating the child inside the room, they will leave through a separate door and enter a third room, where they strip the equipment off.

The whole time, nurses will observe through large glass windows.

“So if there’s any question they can say ‘Wait, stop. You need to clean your hands again.’ Or ‘Wait, stop. Let’s take this glove off more carefully,’” Campbell explained. 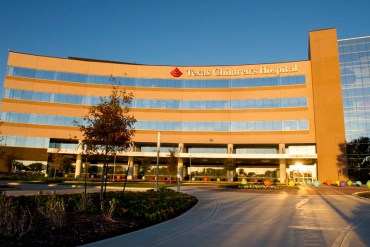 The unit has its own biosafety laboratory, so infected blood samples never have to be carried to other parts of the hospital. There’s also a separate medical waste room, where carts full of used clothing and equipment can be wheeled inside six-foot autoclaves. There’s also a locker room with showers. After every shift, medical workers will shower before leaving the unit.

TCH officials say Ebola was the catalyst for the decision to build the unit, but it is designed to handle any globe-trotting superbug.

“These rooms are equipped to take care of TB, MERS, pandemic influenza, bird flu and even a pathogen that we might not know what it is yet,” Campbell said. “That’s why we wanted to build something with the highest level of isolation ability.”

Before designing the unit, teams from Texas Children’s visited adult biocontainment units at hospitals in Atlanta and Omaha. Dr. Amy Arrington, a pediatric intensive care specialist, said the medical architecture in the new unit is impressive, but none of it will work without proper training protocols and motivated staffers.

“I describe it as a space suit,” Arrington said. “It’s a full-body suit that you put on, that has footies and arm holes and covers you up completely.”

Doctors and nurses who volunteered to work on the unit undertook simulations and mock drills, relearning skills such as inserting IVs while wearing the suit.

“When you put three pairs of gloves on, you [can] lose sensation in your hands because they’re so tight,” said Arrington, “But you really lose that tactile feel that, as physicians and nurses, is really important in taking care of any patient, let alone a child,” Arrington said.

Children have always been especially vulnerable to infectious diseases. During the Ebola outbreak in West Africa, children died at a higher rate than adults.

As pediatricians – and parents – know, sick children need close monitoring. They need encouragement to eat and drink, and comfort when they are scared and confused.

And that’s the drawback to a pediatric biocontainment room – the parents of a very sick child will probably not be allowed inside.

But Campbell says Texas Children’s Hospital is ready for that challenge. At least six doctors or nurses will be assigned to each child, and one of them will act as a family liaison. The kids can also use tablets and video chat to talk with their families, and can see them through the large windows.

And the hospital is developing a special doll — one that will wear the same biocontainment suit as the doctors and nurses.

“So that when the health care providers come in, they understand that, yes, we’re dressed up a little differently but that their little doll has similar attire on,” she said.

The pediatric isolation unit will be ready for patients in late October, with a formal ribbon-cutting expected in November.

Kids With Ebola? Texas Children’s Hospital Is Ready If It Happens In U.S.