Weeks after denying labor’s request to give union members access to health-law subsidies, the Obama administration is signaling it intends to exempt some union plans from one of the law’s substantial taxes.

Buried in rules issued last week is the disclosure that the administration will propose exempting “certain self-insured, self-administered plans” from the law’s temporary reinsurance fee in 2015 and 2016.

That’s a description that applies to many Taft-Hartley union plans acting as their own insurance company and claims processor, said Edward Fensholt, a senior vice president at Lockton Cos., a large insurance broker. 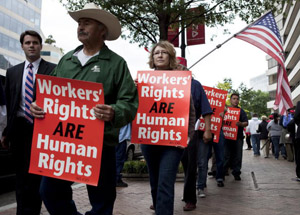 Union member rally near the U.S. Capitol in Washington in May 2010 (Photo by Brendan Smialowski/Getty Images).

Insurance companies and self-insured employers that hire outside claims administrators would still be liable for the fee, which starts at $63 per insurance plan member next year and is projected to raise $25 billion over three years.

Unions, a key Obama ally, have increasingly criticized the Affordable Care Act as threatening the generous medical plans held by many members.

Eliminating the reinsurance fee was one of several resolutions adopted at the AFL-CIO’s September convention, along with giving union plans access to ACA tax credits for lower-income members.

In September the White House said the law disallowed health-law tax credits for union members on top of their company insurance. Now the administration seems to be moving toward part — but not all — of what labor wants on the reinsurance fee.

While it intends to waive the fee for 2015 and 2016, unions also wanted it scrapped for 2014, when it will be greatest. Taft-Hartley plans are collectively bargained and run jointly by unions and employers to allow workers to move from job to job without losing coverage.

The AFL-CIO did not respond to a request for comment.

Although it’s too early to tell whether the Department of Health and Human Services will give union plans all of what they want on the fee, last week’s language “is how HHS often breaks controversial regulatory news,” benefits lawyer R. Pepper Crutcher, Jr. wrote last week. It’s not known when the administration will put out a new regulation on reinsurance.

The reinsurance fee made a cameo appearance in the October debt-ceiling negotiations when Senate Majority Leader Harry Reid reportedly proposed delaying it for everybody until 2015. Republicans objected and the delay was not in the final deal.

The fee, scheduled to kick in next year, would shrink to $42 in 2015 and $26 in 2016, disappearing afterwards. It would help insurers absorb the cost of care for people with pre-existing illness enrolling in plans offered through subsidized marketplaces.

Both unions and business have criticized it as penalizing employer-sponsored health insurance to support plans bought directly from insurers.

The fee “takes money from the pockets of each laborer covered by a health and welfare fund and gives it to for-profit insurance companies,” Terry O’Sullivan, president of the Laborers International Union of North America, wrote in a letter to President Barack Obama last summer.

A LIUNA spokesman declined to comment. The U.S. Chamber of Commerce and the White House did not respond to requests for comment.