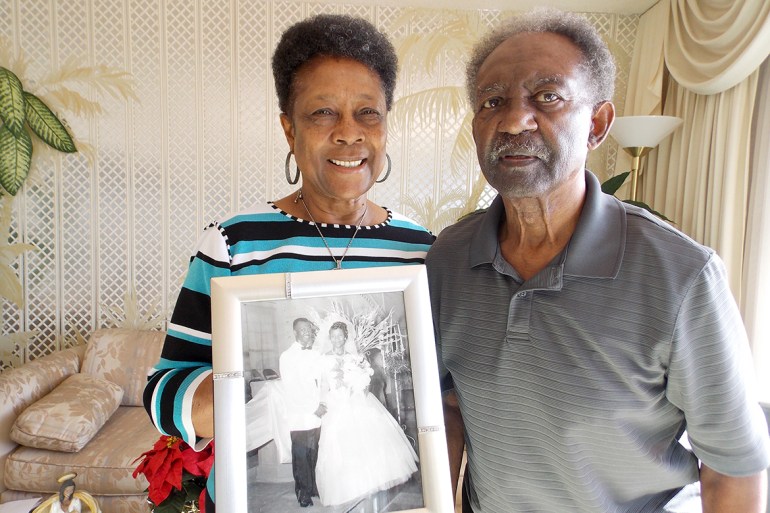 Dorothy and Levi Reeves stand in their Oakland, Calif., home, holding their wedding photo from 57 years ago. Dorothy Reeves agreed to donate both of their brains after death to the University of California-Davis for research. (Anna Gorman/KHN)

OAKLAND, Calif. — The question came as a shock to Dorothy Reeves: Would she be willing to donate her husband’s brain for research?

She knew dementia would steadily take Levi Reeves’ memories of their 57-year marriage, his remaining lucidity and, eventually, his life. But to let scientists take his brain after he died? That seemed too much to ask.

As an African-American and a former schoolteacher, Reeves is keenly aware of the history of racism in health care, including callous and sometimes deadly experimentation. Reeves said she never personally has had a bad experience with doctors or the medical system. But she’s old enough to remember the infamous Tuskegee Institute syphilis study, during which hundreds of mostly illiterate black sharecroppers were assured they were being treated for “bad blood” even as doctors withheld effective treatment over decades.

Top researchers say such wariness, while understandable, is thwarting efforts to understand and treat Alzheimer’s disease and other forms of dementia in black patients today. African-Americans suffer from these cognitive impairments at two to three times the rate of non-Hispanic whites, yet they are less likely to take part in research.

That has created a vexing challenge for scientists, who are trying to persuade more blacks to participate in studies — both while they are alive and after they die. A critical part of their efforts is asking for brain donations.

Shirley Fitch, who lives south of Chicago, said no thank you to Rush researchers on behalf of her husband, Clarence. The former university professor died last summer at age 86, seven years after being diagnosed with dementia.

“I’m hesitant because of distrust,” said Fitch. “Once my brain is donated for one purpose, who is to say it won’t be used for another purpose? It is out of your control.”

Although Shirley Fitch is participating in non-Alzheimer’s research at Rush, she said the historical abuses of black people have been “awful and hard to get over.”

Even today, blacks tend to get worse treatment from hospitals, she said. “It all gets stirred in the pot as to feelings about bias.” 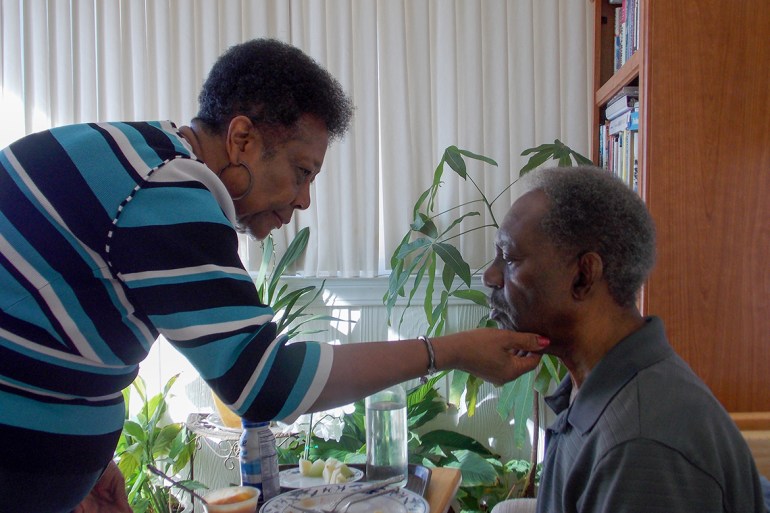 Dorothy Reeves, 79, helps feed her husband, Levi, who has Lewy body dementia. Reeves, a former schoolteacher, initially declined brain donation but later agreed — for both her and her husband. (Anna Gorman/KHN)

The precise explanations for the disparities among blacks and whites are unknown. Until recently, most of our understanding of the pathology of dementia was largely based on studies of white patients.

“We have a real knowledge gap in accurately knowing if dementia is different in minorities as compared to whites,” said John Olichney, a neurologist and clinical director of the Alzheimer’s Disease Center at the University of California-Davis.

Scientists say blacks’ disproportionate rates of dementia may be related in part to the prevalence of disorders that raise the risk of vascular disease: diabetes and hypertension, for instance. Socioeconomic factors such as higher rates of poverty and lower levels of education also seem to play a significant role, according to research led by the University of California-San Francisco.

Despite advances in imaging technology that allows researchers to peer into the brains of live patients, studying the organ after death is crucial to a deeper understanding of the causes and progression of disease and to developing drug treatments, Olichney said.

The challenge is getting enough brains from different populations to study. It’s not just a matter of assuring potential donors that Tuskegee and other ethical debacles are in the past. To gain trust, Alzheimer’s research facilities such as UC-Davis and Rush University are also trying to diversify their staffs, collaborate with community leaders and study religious and cultural beliefs on brain donation.

For example, some African-Americans don’t want their brain separated from their body when they are buried, said Stephanie Monroe, director of African Americans Against Alzheimer’s, which is engaged in various efforts to educate people about the disease and its effects.

“Many people believe in ashes to ashes and dust to dust,” she said.

Alzheimer’s researchers at UC-Davis recognized about 15 years ago that they needed a more representative slice of the population, especially in diverse Northern California. At the time, centers around the country were mostly studying well-educated, white people who volunteered, Olichney said.

So they started reaching out to both the African-American and Latino communities. “That was a real change in our mindset,” he said.

Today, nearly 400 patients, including about 70 African-Americans, are enrolled in its longitudinal study of the progression of dementia, and they come in yearly for memory evaluations and other tests. Of the study participants, about 270 have agreed to donate their brains after death, more than 40 of them African-American.

At the Rush Alzheimer’s Disease Center, doctors started following a cohort of African-Americans in 2004 and, some seven years later, began to seek brain donation for the study. Close to 500 African-Americans have signed up to donate after death, and 72 brains already have been donated, Barnes said.

Though she is pleased with the high rate of commitment, she noted that more works needs to be done. In another study, about 3,100 white participants agreed to brain donation, with 1,400 already donated. Recruiting African-Americans “takes a lot of effort and a lot of work,” she said. “Every year, we bring it up again and revisit it with those who are reluctant. But if someone is really firm, we don’t push the subject.”

Research on the donated brains has led to intriguing findings. One Rush study, published in 2015, found that blacks with Alzheimer’s disease were more likely than whites to have other disorders, such as Lewy body dementia. Twice as many blacks with Alzheimer’s as whites with the disease also had Lewy body dementia, in which protein deposits build up in nerve cells, according to the study. Blacks with dementia also had more severe disease of the arteries, the study found.

The number of blacks studied was relatively small — 41 compared with 81 whites — yet its findings were potentially important. That’s because the presence of other diseases in the brain means blacks may not respond as white patients do to drugs aimed specifically at Alzheimer’s.

Even for experienced research institutions, getting people to participate in donation remains complicated — in part, because families don’t necessarily agree about it among themselves. 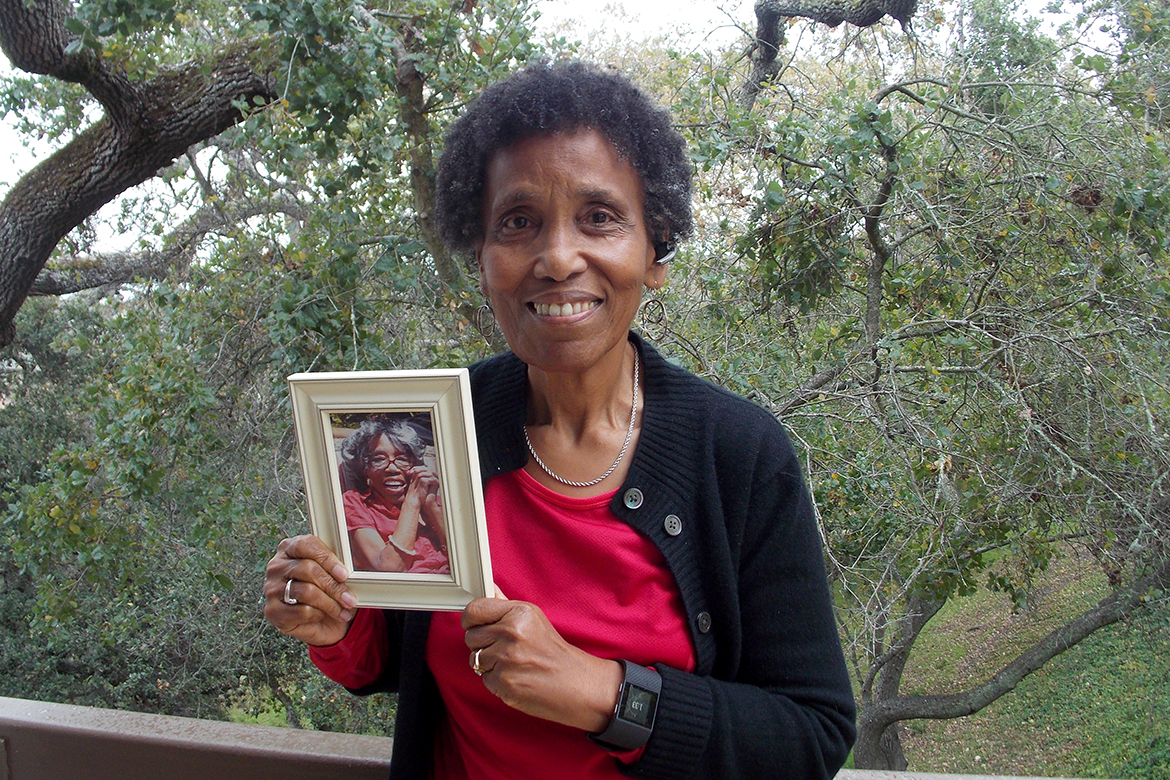 Andrea Gourdine holds a photo of her mother, Gladys Brown, who died in 2012 after being diagnosed with Alzheimer’s. Brown donated her brain to the University of California-Davis, for research. (Anna Gorman/KHN)

Andrea Gourdine remembers clearly when her mother, Gladys Brown, started behaving oddly. Once, the elder woman forgot a stove burner was on and a dish exploded. Then she stopped bathing regularly. “And she was normally fastidious,” Gourdine said. “Something was really, really wrong.”

Brown enrolled in the research at UC-Davis, was diagnosed with Alzheimer’s in 2005 and soon after agreed to donate her brain. It won’t help me, Brown told researchers, but it could help others. She died in 2012, at 87.

Gourdine also signed up for the UC-Davis study and has consented to donate her brain. She does not have Alzheimer’s, but researchers are seeking brains of those without dementia for comparison.

She is aware of the history of medical abuse of African-Americans but says she doesn’t see any point in focusing on the past.

Gourdine’s sister, India Collins, disagrees with her sister and objected to her mother’s donation.

“I have problems with scientific research and I get very upset with scientific data and outcomes in general,” said Collins. She questions how helpful it is to African-Americans. “Why would you want to participate in their research if it does not benefit you?”

Gwen Gates, a recruiter and research coordinator at the UC-Davis center, goes to churches, health fairs and other events to build trust and develop deeper relationships among the university and minority communities. Patients and families want to know what scientists do with the brains. They worry about how relatives will react. They fear donation will interfere with funeral arrangements or their plans for an open casket.

She assures them it won’t. She explains that brain donations will help future generations, perhaps even in their own family.

Occasionally, families readily agree. Some adamantly refuse. For others, the decision is a process.

Dorothy Reeves declined brain donation initially but agreed to sign up herself and Levi, 81, for observational studies. Then she saw what the disease could do. Her husband, who has Lewy body dementia, went under a table one day to get a magazine and couldn’t find his way out. He forgot her name and those of his children.

She thought about all the other people like Levi.

“It affects people in ways you can’t imagine — regardless of your race,” she said. “It’s almost unbearable.”

Soon the researchers had their answer. Yes, she would agree to donation — for both of them.

KHN’s coverage in California is funded in part by Blue Shield of California Foundation and its coverage related to aging & improving care of older adults is supported by The John A. Hartford Foundation.

Lag In Brain Donation Hampers Understanding Of Dementia In Blacks