The insurance program was called “Believe Me”  — but Kairis Chiaji had her doubts.

She and her husband Arthur were skeptical that the new health plan they purchased for 2015 would actually work out. That’s because their experience in 2014 had been a disaster, she said.

The Sacramento, Calif., couple had been thrilled to learn last year about the prospect of subsidized coverage under the nation’s health law, she recalled. Each of them had been uninsured for years when they signed up for coverage through the state exchange, Covered California.

When her children were little she worried about paying for their care if they were injured.

“I just simply told my children, listen, all I’ve got is a ruler and duct tape, so you’re not allowed to break any bones. Literally you can’t get hurt,” she said.

Arthur, an immigrant from Kenya who worked in food preparation, hadn’t had coverage since he left his home country,  which has a national health insurance program. “Everybody can afford insurance,” said Arthur, 39, who married Kairis in 2013. “And so that’s how I thought it was gonna be [in America]. That was not the case.”

At a health fair in February 2014, the Chiajis signed up for a plan with Anthem Blue Cross at a cost of $138 a month for the two of them. Her two oldest children, who are 18 and 22, were able to get insurance through Medicaid, the state and federal program for the poor, and her younger son has private insurance through his father, Kairis’ ex-husband. 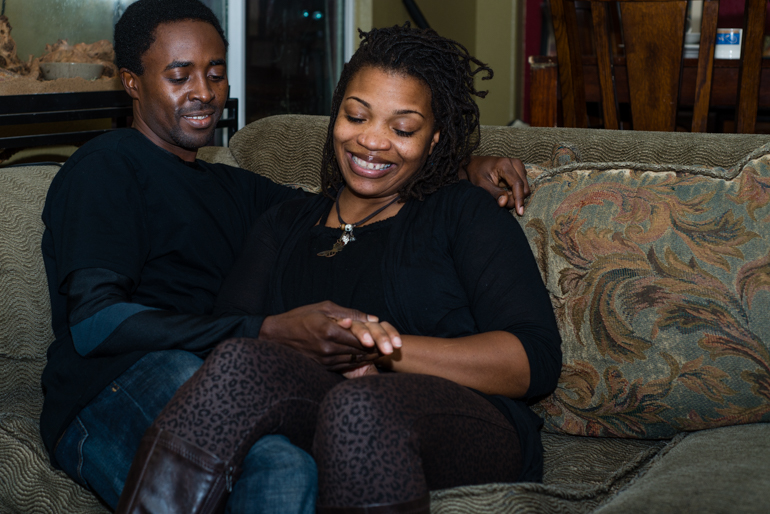 Arthur and Kairis Chiaji in their living room at their house in Sacramento, California on Thursday, December 11, 2014. Even though there was a mix up with their application through Covered California, the Chiaji’s say the hassle is worth it (Photo by Heidi de Marco/KHN).

Kairis and Arthur went home and waited to receive their insurance cards and first bill. Nothing arrived.

At the end of June, they finally received their cards and a bill for May, June and July, Kairis said.

They sent in one month’s payment, which they assumed would be for July since they hadn’t even known they were eligible for coverage in May and June. But Anthem told them  their payment only covered May, Kairis said.

When Kairis called Anthem to ask whether there had been a mistake, “they said you’re not covered [now] because you have to pay the months before now,” she said.

As she tried to resolve the problem, Anthem told her to hold off paying another bill until the insurer was able to process a change in their  income, which would lead to a slightly lower premium. So she waited, but didn’t get another bill.

Around that time, the couple brought two more children into their home, whom they are in the process of adopting from the foster system.  Arthur tried to go to the doctor for a physical exam to complete the adoption but was told by the medical office he wasn’t covered.

Kairis tried to clear things up on the phone with Anthem. “You wait on line for an hour, you get disconnected, they say no one can talk to you and hang up on you,” she said. “It was really frustrating.” When she called Covered California, she said, she got a message explaining operators were busy and she was disconnected. 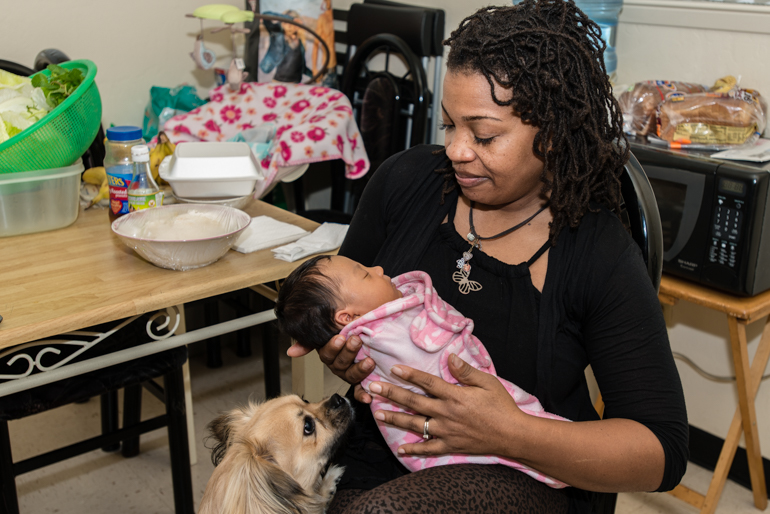 Kairis Chiaji, 43, from Sacramento, California, visits her client’s new baby Tori Elizabeth Nguyen. Before the Affordable Care Act, Chiaji says she was unable to afford health care on her income as a self-employed birth coach (Photo by Heidi de Marco/KHN).

Kairis estimated that she spent about 20 hours in all trying to figure out their insurance situation.  Each time she called, she said, she was told something different.

“At some point, [Anthem] said the month that you paid for basically amounted to nothing. There was never a month when we had insurance we could use, and you have to back pay four months worth of coverage in order  to get covered right now — $138 times four, they wanted that payment.”

That would have been $552 for insurance the Chiajis said they never actually had.

Kaiser Health News contacted both Anthem and Covered California to get their take on the problem. Both said that according to their records, the Chiajis had coverage consistently through May. The Anthem spokesman added that the confusion was probably caused by some early communication issues between Covered California and the insurer.

No one  has tracked how many people had problems like the Chiajis in the first year of enrollment, but many customers reported initial computer and communication glitches. For example, consumers and insurance agents in California  said that when they tried to tell Covered California about a change in their income, their insurance plans were cancelled and they had to be re-enrolled, according to  the Center on Health Reporting.

“But even if you’re dealing with 10 percent or 1 percent, in Covered California  you’re still talking about tens of thousands of people. And for them, it’s completely frustrating, it’s a huge problem. It  undermines the entire basis of why they’re signing up for insurance, which is the security against medical costs,” Wright said. 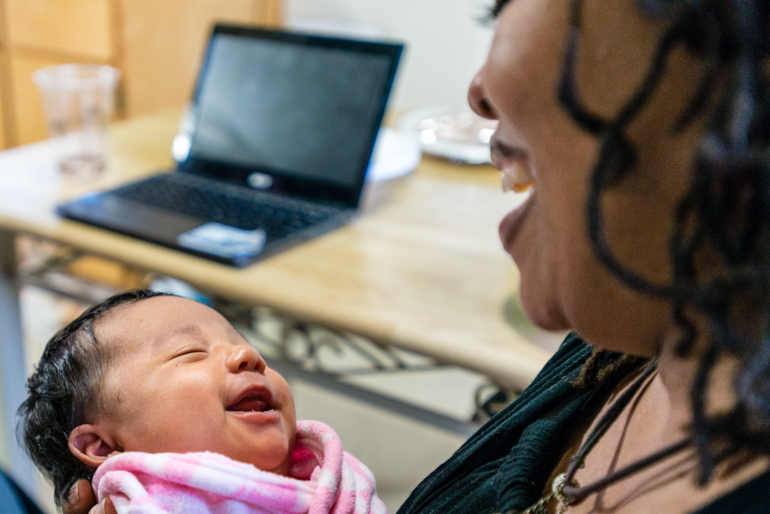 When the exchanges first launched,  “the private insurers just didn’t have the systems in place and didn’t have the capacity to deal with this volume of customers,” Wright said.

In November, Kairis and Arthur Chiaji received a letter from Anthem Blue Cross, asking them to renew their coverage for 2015. But the couple had had enough. They enrolled instead with the Kaiser Permanente, at a slightly higher cost of $158 a month. (Kaiser Health News is not affiliated with Kaiser Permanente.)

Again, there was confusion. The family said it received a bill for January coverage, though Covered California had told Kairis her plan did not begin until Feb. 1.

But this time around, Kairis was more savvy. Right away, she arranged a conference call between Kaiser Permanente and Covered California, cleared up the error, and paid for her first month of coverage — February.

In March, Arthur injured his wrist while lifting heavy trays of food at work. The Chiajis were still waiting for their Kaiser Permanente insurance cards to arrive, but Arthur needed to see the doctor as quickly as possible.

This time, the Chiajis were in luck: Kaiser Permanente had created a special program in 2014, at the beginning of subsidized coverage under the Affordable Care Act, to ensure that any delays in enrollment would not prevent new members from receiving care.

The program, called “Believe Me,” allowed patients who believed they were Kaiser Permanente members but were not yet officially entered in the system to get care without paying at the time of service. Kaiser holds the medical bills for 90 days to give the system time to catch up.

Kairis was able to book her husband an appointment with a Kaiser doctor under a temporary ID number. It turned out he had twisted but not fractured his wrist, and he was sent home with a brace. He went back two more times for treatment of that injury and an inflamed hip, and eventually the card arrived in April.

“We’re able to get care, so I’m not worried if my husband gets hurt on the job or if I twist my finger and can’t braid. I’m comforted,” she said.

Like many people,  Kairis said her experience of the health law was more positive in the second year after the exchanges were launched. Polls show Americans recently have gone from being more opposed to the law to being just about evenly split on its merits.

Still, there is a way to go, said Kairis. “It would be really nice if Covered California and the health insurers would streamline their process a little better and if everyone had the same info,” she said.

“You know with anything new there are going to be glitches. But now that millions of people are enrolled in coverage, they have to figure out how to make it work.”

Kairis Chiaji eventually received her insurance cards and has been making full use of her new Kaiser Permanente coverage.

In June, she went in for a mammogram – her first since 2010, when she had found a lump in her breast, which turned out to be a cyst.  This time, Chiaji learned she has unusually dense breast tissue. She is healthy, but her doctor now plans to monitor her every six months for changes.

The new coverage, Chiaji says, has given her a sense of relief and security.

“There’s a level of stress that’s just not there that I’ve been carrying since 2009,” when she was last insured, she says. “I feel like it’s ok not to be ok. If something happens and I feel sick, I don’t have to worry about finding a home remedy for strep throat. I can really have someone who knows what they’re doing take care of me.”