WASHINGTON, D.C. — In the 18 years that Kathy Brandt and Kim Acquaviva have been together, death has been a constant companion.

It’s the reason they went to work each morning. Acquaviva, a professor of nursing, wrote an acclaimed 2017 book on inclusive end-of-life care for LGBTQ people. Brandt, a nationally known hospice industry leader and consultant, was tapped to write and edit the latest clinical guidelines for quality palliative care.

But in January, the professional became acutely personal: Brandt, 53, was diagnosed with metastatic ovarian cancer and learned she had mere months to live.

“The day she had her scans, as soon as we saw them, I was like, ‘It’s clear what this is,’” recalled Acquaviva, 47, settling beside the couple’s small spaniel, Mitzi, in their sunny living room last month.

“It was definitely shocking,” said Brandt, thin and wan beneath her signature spiky hair. She’d had puzzling intestinal symptoms since last summer, but never suspected it was serious.

Once the initial shock wore off, however, the couple who met while working for a Florida hospice decided to use Brandt’s illness as one more way to educate people about what it means to die.

“It’s what Kim and I have been working on for 30 years. The whole idea of: We need to talk about these issues, we need to get them out of the closet,” Brandt said. “We need to not be scared of death.”

Since her diagnosis with stage 3 ovarian clear cell carcinoma, or OCCC, Brandt and Acquaviva have been public about a controversial decision: Brandt is pursuing aggressive palliative care, forgoing treatments such as chemotherapy or radiation. It’s a choice made by fewer than 2% of patients facing the disease, one study showed.

But OCCC, a rare cancer, is often resistant to chemotherapy. In advanced stages of the disease, like hers, the prognosis is poor.

“Once I read things, it became very clear it would be futile,” said Brandt.

She said she has witnessed many grim cancer deaths during her career and understands the toll chemotherapy takes.

“I want to minimize the time I’m at the doctor,” Brandt said. “If it’s not going to save my life, then why would I go through trying to get an extra month, when that month leading up to it would be terrible?”

The couple — who married in 2010 and have a 19-year-old son, Greyson Acquaviva — have detailed their experience in frequent, frank updates through a GoFundMe site set up by friends to defray medical costs and living expenses. So far, at least 440 people have donated more than $56,000 toward a $100,000 goal. 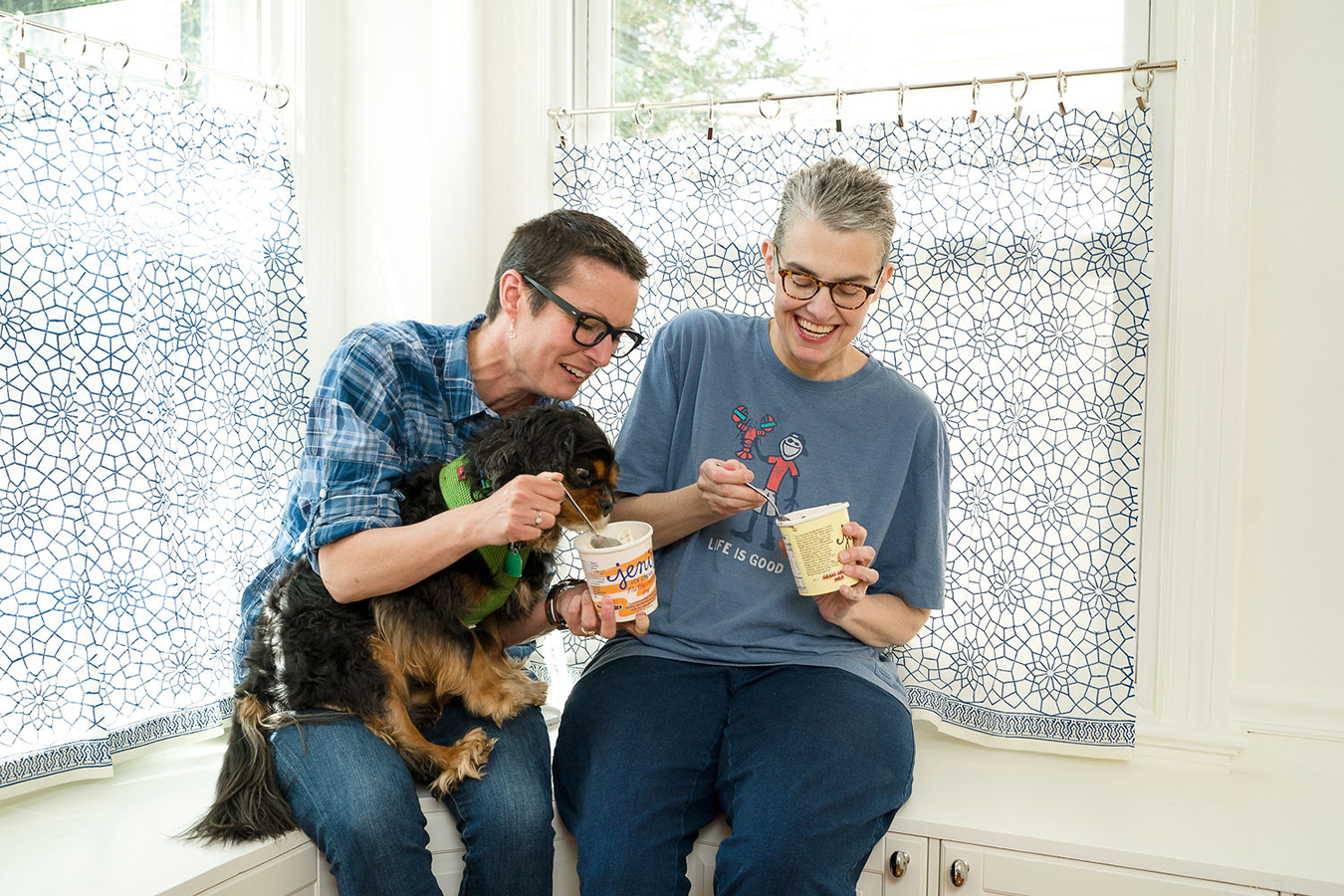 “I want to minimize the time I’m at the doctor,” says Brandt (right), who was diagnosed with metastatic ovarian cancer in January and is pursuing aggressive palliative care.(Andrew Propp for KHN)

“Everyone initially was just shocked,” said Jon Radulovic, vice president of communications for the National Hospice and Palliative Care Organization, or NHPCO. He worked for a decade with Brandt, whom he describes as “focused and intent, with an unending reservoir of energy.”

“The fact that she and Kim are sharing this experience really openly is making a difference,” he said. In a series of posts and emails about Brandt’s illness, the pair have explained what’s helpful — kind messages, shared memories — and what’s not – unsolicited suggestions about how to “battle” cancer.

“At this time, our family gently asks that you not offer advice about treatment options you think Kathy should consider,” Acquaviva wrote in an email widely circulated to friends and colleagues.

In pursuing aggressive palliative care, Brandt is focused on relieving symptoms like pain, bloating and sleeplessness. Although palliative care can be used along with curative treatments, Brandt said she’s “100% certain” about her decision.

Some friends and family have had trouble accepting that choice, Acquaviva said. One cousin sent a message saying: “You don’t realize it, but you’re strong enough to do chemo.” An acquaintance showed up with fresh carrot juice, insisting that drinking 5 pounds of the juice daily would cure Brandt’s disease.

“I let her know really clearly that it wouldn’t,” Acquaviva said.

Even Brandt’s surgeon, a highly rated specialist, pushed back.

“Her oncologist is truly exceptional and I think she has had some struggles with this,” Acquaviva said. “I said, ‘Kathy’s really clear that she doesn’t want chemo and she said: ‘I can’t just let her kill herself.’”

Despite their extensive experience with hospice and palliative care, Brandt and Acquaviva say they’ve had to remain firm to have her wishes honored. It underscores the difficulty that cancer patients without their expertise may face.

“The default is, you’re going to fight with chemo,” Acquaviva said. “I would love to see clinicians and oncologists presenting patients with choices.”

At Sibley Memorial Hospital in Washington, D.C., where Brandt underwent the surgery that confirmed her diagnosis, Nicole Ollis is her palliative care nurse practitioner. She said Brandt and Acquaviva are not her typical clients.

“Kathy is probably my youngest patient who has been so confident not to move forward with treatment,” she said. “She would be my most educated patient when it comes to maximizing quality of life.”

Soon, however, Brandt will seek care from a new team of palliative specialists. Two weeks before Brandt’s diagnosis, Acquaviva accepted a new job: an endowed professorship at the University of Virginia School of Nursing.

Despite her illness, Brandt insisted Acquaviva take the post. “In the midst of dying, you’ve got to have, if at all possible, something to look forward to. I’m looking forward to it for Kim.” 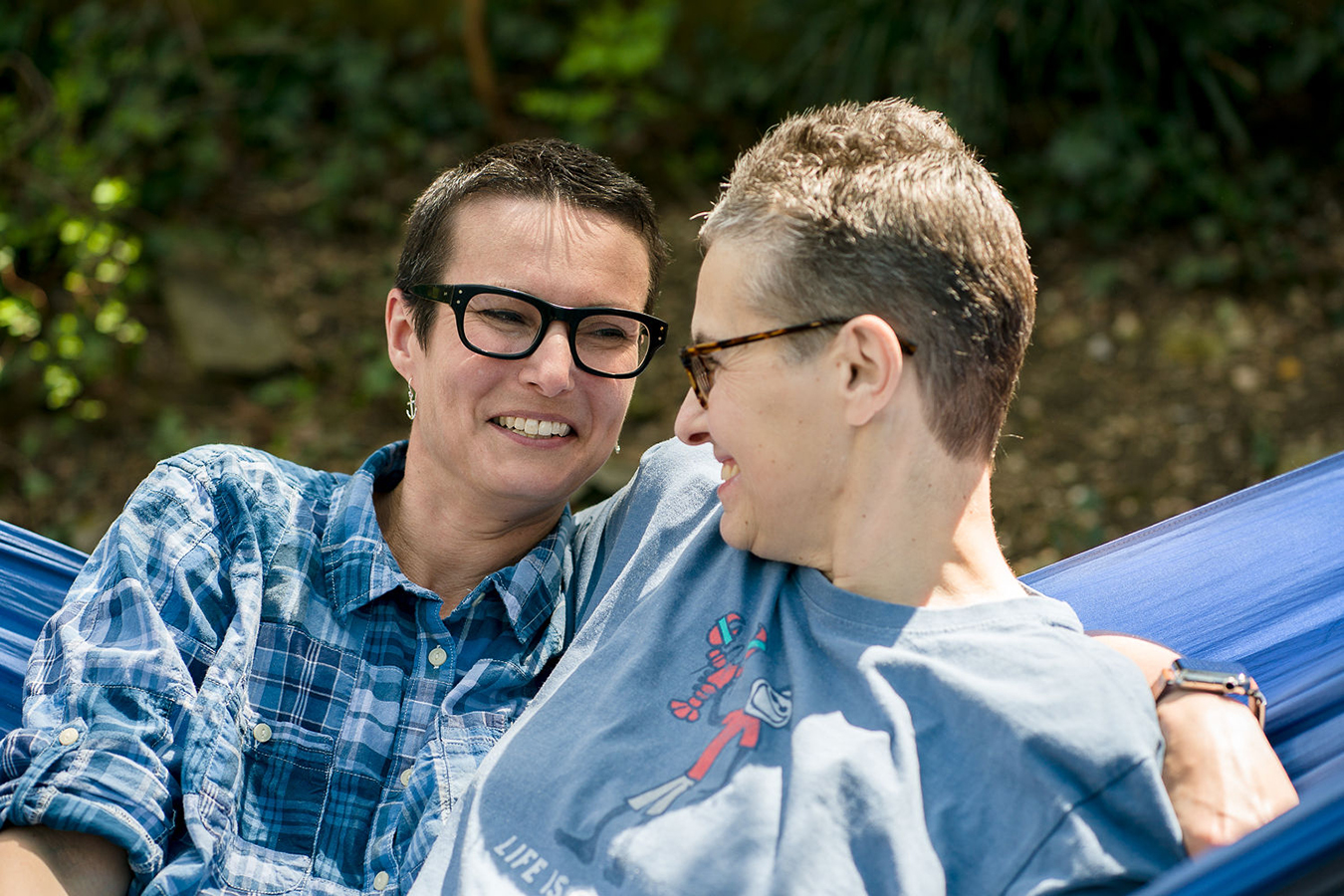 Acquaviva and Brandt have been together for 18 years and married in 2010. Acquaviva (left), a professor of nursing, wrote an acclaimed 2017 book on inclusive end-of-life care for LGBTQ people. Brandt (right), a nationally known hospice industry leader and consultant, was tapped to write and edit the latest clinical guidelines for quality palliative care.(Andrew Propp for KHN)

They’ve just sold the home they owned for a decade in D.C. and bought a new place in Charlottesville, Va. Greyson finished his freshman year at Emerson College in Boston, where his moms proudly note he won two awards in a student film festival.

Acquaviva’s new colleagues are poised to welcome her — and to care for Brandt in whatever way she needs, said Susan Kools, associate dean for diversity and inclusion at the UVA nursing school.

“These are women who are living their values,” she said. “Instead of treating this news as a bitter twist of fate, they’re embracing their values as palliative care professionals.”

Dozens of people have sent cards, posts and emails praising Brandt and Acquaviva for being brave in sharing their story at a time of such personal hardship. But Brandt said raising awareness about choices for dying patients has always been the legacy she’d like to leave.

“The story of palliative care is still being written,” she said. “It’s so underutilized and it can be so life-changing for people, and there are so many things that block people’s access to it.”