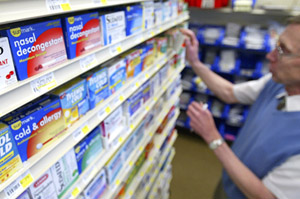 When Arthur Massei learned that the new health law would cut his tax break for buying medicine, he enlisted in a broad, well-financed corporate lobbying campaign to repeal the provision.

Massei is one of an estimated 30 million Americans who use pre-tax money deposited into employer-sponsored flexible spending accounts to purchase health care. Starting last month, the law bars them from using FSAs to buy over-the-counter products like cold remedies unless they get prescriptions. “This alone will cost me $150 a year in additional taxes,” says Massei, 51, a Manhattan talent manager.

The repeal effort will move ahead next week when Sen. Kay Bailey Hutchison, R-Texas, and Rep. Erik Paulsen, R-Minn., are expected to file bills that would allow FSA money to once again pay for OTC medications. The legislation also would eliminate the law’s $2,500 annual limit on contributions to FSAs, a provision that takes effect in two years. Currently, employers decide limits.

Some of the largest of the 500 companies that administer FSAs, as well as drug makers and business groups, are organizing and funding the drive to change the law, which they say may reduce the number of people using these accounts. Among the strategies:

— To mobilize consumers, the Employers Council on Flexible Compensation, a trade group, created Save Flexible Spending Plans, a self-styled “national grassroots advocacy campaign.” Its website, Savemyflexplan.org, is run by Hyde Park Communications, a Washington public affairs firm that in January added an online “OTC Rule Complaint Center” to collect individual stories of hardship and help consumers like Massei send complaints to Congress, as he has done.

— Executives from FSA companies will ramp up their Capitol Hill contacts with lawmakers in March when they come to Washington for a conference. “I and my chief compliance officer have had over the last couple of months probably over 100 meetings on Capitol Hill,” says Joe Jackson, chief executive officer of WageWorks, one of the largest FSA administrators.

— A New Jersey nonprofit is giving lawmakers an economic analysis showing that the over-the-counter restrictions will lead to $695 million in extra health care spending a year. The major reason: Since the law allows such purchases if patients get a prescription, some consumers will go to their doctors more often, and those physicians may end up prescribing more expensive drugs. The report was put together by the Foundation for HealthSMART Consumers, which says patients should have a greater financial role in their own health care decisions and gets part of its funding from consumer health product makers.

Campaign organizers say that since Savemyflexplan.org was created at the start of the health care debate in 2009, more than 96,000 emails have been sent to lawmakers. They expect a bigger backlash now that the OTC restrictions have kicked in.

“There are a lot of people who are frustrated and it’s going to be a matter of channeling that dissatisfaction through the congressional offices,” says John Hickman, who heads the health benefits practice at Alston + Bird and whose clients include FSA administrators such as Aflac.  “That’ll take a little bit of time. But the Republicans in the House know it, they heard it, and it was part of the reason they were elected.”

The FSA restrictions are among many provisions of the health law targeted by Republicans for change or repeal, including some that are needed to finance an expansion of insurance coverage for millions of Americans who can’t afford it. Congress’ Joint Committee on Taxation estimated the FSA provisions in the law would generate more than $2 billion a year.

Some health economists say FSAs are a wasteful tax break because they don’t help those who need aid the most.

“Is it really so bad to pay for insurance for our lowest income citizens by removing a tax break for our middle and upper income citizens that they use to buy aspirin and glasses?” asks Jonathan Gruber, a health economist at the Massachusetts Institute of Technology.

To counter this argument, the industry is presenting moderate-income people to defend FSAs. “A lot of the arguments for reducing them didn’t make sense to me,” says Noah Christian, a 40-year-old scientist from San Diego who, like Massei, was alerted to the changes by Savemyflexplan.org. “It’s an argument that it only benefits upper income people, which I don’t agree with, because 10 years ago I wasn’t making that much money and it really helped.”

Those lobbying Congress also are hoping to eliminate the longstanding “use it or lose it” rule under which any money left over at the end of the year is forfeited to employers. That rule discourages people from putting in large sums unless they’re sure they’ll spend it. Instead, the industry would like to let people roll over the money into the next year or have it returned to them as taxable income.

Even if the bills to be introduced by Paulsen and Hutchison don’t go anywhere, the companies have other opportunities. They say they may try to add FSA changes to Republican health care legislation, such as allowing insurers to sell their products across state lines. Or they might try to stick them in a measure making technical corrections to the health care law.

In the future, the industry hopes to alter the so-called Cadillac tax on expensive insurance plans. Under the health law, a 40 percent tax would be placed on the portion of excess employer-provided health coverage, including FSAs.

But the industry has time to take on the “Cadillac tax,” which doesn’t start until 2018.  “That’s three congressional elections and one presidential election away,” says Hickman.