The Commission on Long-Term Care held its first meeting Thursday on Capitol Hill with some members acknowledging that their late start adds to their challenges in offering Congress recommendations on how to finance the expensive services for seniors and disabled Americans.

The panel is hobbled with a meager budget and staffing, and it is facing a three-month deadline for its report. Speakers at the meeting reminded the commission that the effort is daunting.

The commission heard a litany of statistics from four experts who explained how the nation’s growing population of seniors will become more dependent on long-term care services. But the rising cost of those services threatens to deplete individuals’ savings and add to the nation’s budget problems because of the expenses borne by Medicare and Medicaid. 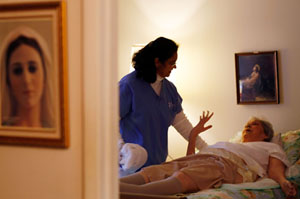 “We know that 70 percent of people over the age 65 will need some form of long-term services and support,” said Dr. Bruce Chernof, the commission’s chairman who also heads the SCAN Foundation (which helps fund KHN’s aging coverage), a research organization that focuses on elder care.

Anne Tumlinson, senior vice president of the research firm Avalere Health, told the panel that nearly half of the Americans receiving long-term care are under the age of 65, with only a minority living in nursing homes. She estimated that total number of people getting long-term care will be 16.5 million in 2050, a 70 percent increase from today’s numbers.

Medicare, the health care program for the elderly and disabled, does not cover unlimited nursing home care and restricts it to those have spent three in-patient days in a hospital. Medicaid, the joint federal-state health program for low-income people, covers more than 60 percent of the people living in nursing homes.

Although government programs provide a significant portion of long-term care, none offer the full range of services people need, said Kirsten Colello, a health and aging policy specialist at the Congressional Research Service.

Using long-term care insurance to pay expenses is not an option for many Americans, as premiums rise and companies that can’t make a profit leave the market, said Marc Cohen, an industry consultant. Most of the long-term care policies available are sold by only 12 insurers, he said.

G. William Hoagland of the Bipartisan Policy Center offered the most dismal outlook for the commission. “Medicare and Medicaid have become the major source of long-term care, and cannot continue at the current pace,” he said. Americans should be encouraged to increase their retirement savings so that these programs are relied on as a last resort.

Congress established the panel as part of the Jan. 2 fiscal cliff deal. It took three months for congressional leaders and President Barack Obama to appoint the commission’s 15 members. Under the law, the panel’s recommendations are due to Congress six months after its members are appointed. But nearly three months passed before the commission finally convened.

“We have a very short time line,” said Chernof. “There are a lot of things we would have liked to do as a commission, but we will be done by the end of September.”

The last time Congress created a long-term care commission was in 1988, which became known as the Pepper Commission, named for its first chairman, Rep. Claude Pepper, D-Fla. That commission took two years to complete its work, and by then, Sen. Jay Rockefeller, D-W.Va., had taken over as chairman.

“The fact is that each of us will need these services and supports at some point in our lifetimes,” Rockefeller, who added the commission to the fiscal cliff compromise, said in a statement Thursday. “The question is whether most Americans can afford to pay for them.”

At the meeting, the commission’s vice chair, Mark Warshawsky, director of retirement research at the benefits consulting firm Towers Watson, seemed to acknowledge that the panel was trying to make up for lost time as he thanked the invited experts for appearing on very short notice.

The commission was formed after the demise of the voluntary long-term care program created by the federal health law, called the Community Living Assistance Services and Supports Act, or CLASS. The Obama administration cancelled CLASS after determining that it was unfeasible because high premiums would discourage healthy people from joining. If enough people did not voluntarily enroll, the program would not have been self-sustaining. Congress later repealed CLASS and replaced it with the commission.

The group is sharply divided politically with nine members appointed by Democrats and six by Republicans.

“The commission should not be sold short, coming out of the gate,” said Connie Garner, a top aide to the late Sen. Edward (Ted) Kennedy, D-Mass., who championed CLASS. “It is keeping the conversation alive.”

The commission is planning additional public meetings, although no dates have been set, said Chernof. 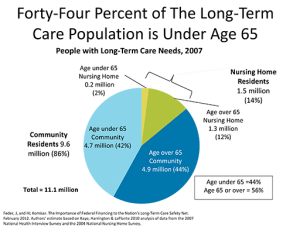