Just a few miles from Disney World, Harris Rosen’s hotel empire is mostly closed because of the COVID pandemic.

One crucial condition for reopening will be testing any of his 4,000 employees who show potential signs of having the disease, he said.

Since March, the company has tested more than 500 workers at its employee health clinic and its impromptu drive-thru site in Orlando, Florida. Sixteen were confirmed cases of COVID-19.

When Rosen Hotels & Resorts, which comprises eight hotels with nearly 7,000 rooms in the Orlando area, reopens later this spring or summer, it plans to have employees regularly fill out a questionnaire about their health and travel history. All employees will get their temperature taken when they arrive, and those with fevers above 100.4°F will not be allowed on the worksite. Rosen is still working out details of its strategy, but it also plans to give workers with a fever and other COVID-19 symptoms a diagnostic test for the virus.

The Rosen chain is ahead of many businesses still weighing options for reopening. That’s partly because since 1991 it has provided medical care to workers through its employee health clinic.

“Companies are asking what is necessary to reopen businesses safely, and they see testing as one of the key things,” said Stephen Ezeji-Okoye, chief medical officer of Crossover Health, which manages worksite health clinics.

Across the U.S., and across industries, companies have closed their worksites for the past month or so, or operated at significantly reduced capacity. Meat-processing plants in the Midwest have been closed because tight workspaces helped spur outbreaks, nursing homes across the country have seen deaths among staff members needed to care for ailing residents, and flight attendants report increasing cases of the disease.

Now, as half of the states begin the delicate task of lifting stay-at-home orders and allowing businesses to reopen, Rosen is one of many employers being thrust into the debate about how to keep employees and customers safe.

“Employers are tremendously interested in testing because they want to make sure their workplaces are as safe as possible,” said Dr. Jeff Levin-Scherz, a national co-leader of Willis Towers Watson, a consulting firm. “Testing needs to be a component of a way to reduce the risk, but it’s not the entire strategy.”

Yet COVID-19 testing has vexed health officials and politicians since March. Federal and state leaders have bickered over whether supplies of tests are adequate.

Rosen Hotels & Resorts, however, says it does not anticipate any problems securing test kits. While there are still parts of the country with a paucity of testing, central Florida is not one of them. The Orlando area has at least two dozen testing sites, and Gov. Ron DeSantis said during a meeting at the White House last week, “Our ability to test exceeds the current demand.”

For many companies, however, moving toward a testing program is much less certain.

“It’s a difficult time for employers trying their best to protect employees,” said Dr. Mohannad Kusti, corporate medical director of Pittsburgh-based U.S. Steel Corp. The company hopes to decide this month whether to start testing its roughly 18,000 employees at locations in Pennsylvania, Indiana, Alabama and other states.

Kusti said testing isn’t perfect but could add to the arsenal of weapons against the virus, which include requiring workers to wear gloves and face masks and increasing social distancing when applicable.

The company has hesitated to start testing partly because of a lack of tests and concerns over accuracy, he said.

In Nevada, Wynn Resorts, which owns two large hotels in Las Vegas, is partnering with University Medical Center of Southern Nevada to provide free testing to all its Las Vegas employees, either at the workplace or a hospital-designated site.

“This will ensure that Wynn employees that would like to be tested will have access to reliable and accurate COVID-19 testing well in advance and leading up to the opening of the resort,” Wynn said in a statement. 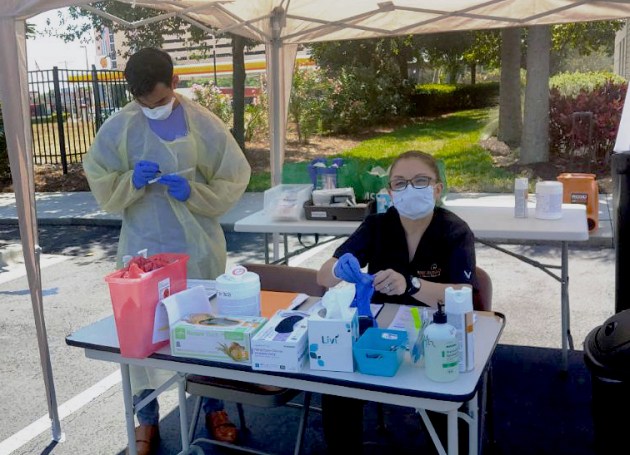 Employers with on-site health clinics are best positioned to test because they likely have access to the supplies and the providers needed to administer them, said Mike Thompson, CEO of the National Alliance of Healthcare Purchaser Coalitions.

For example, earlier this year Microsoft began a testing program for workers at its Redmond, Washington, headquarters. Intel Corp. said it is looking into the issue but has not decided how to proceed. Amazon said it is setting up a system of labs to begin testing its workers across the country.

“Regular testing on a global scale, across all industries, would both help keep people safe and help get the economy back up and running,” Amazon CEO Jeff Bezos wrote in a recent shareholder letter.

San Francisco recently partnered with a private genomics testing company, Color, to provide COVID-19 testing to any city employees, contractors and other “essential” workers with symptoms of the disease.

“The reality is we are all in uncharted waters,” said Color CEO Othman Laraki. Employers want to offer testing to help their workers and customers they serve feel more secure, he said.

About one-third of employers surveyed by the Pacific Business Group on Health in April said they are testing employees at or near the workplace or considering it.

Some experts, however, question whether such efforts will make a difference.

Dr. Jamal Hakim, chief operating officer at Orlando Health, a large hospital system in the Florida city, said he doesn’t see employer testing as a panacea. A more effective strategy, he suggested, would be making sure that employees stay home if they have any COVID symptoms, such as fever and dry cough, and that they wash hands often and don’t touch their face.

Part of the challenge with testing is someone newly infected may not show a positive result for several days. Someone can also get infected following the test. It also takes at least a day to get results back, giving the virus more time to spread unchecked.

Employers are generally not allowed to inquire about workers’ medical conditions. But the Equal Employment Opportunity Commission, the federal agency that enforces workplace civil rights laws, issued new rules in April permitting employers to test for COVID-19 as a condition of entering the workplace. The one caveat is that employers must test all employees, or, if only certain employees are selected for testing, the employer must have a reasonable reason for doing so — such as testing employees who exhibit persistent coughs or other symptoms associated with the disease. 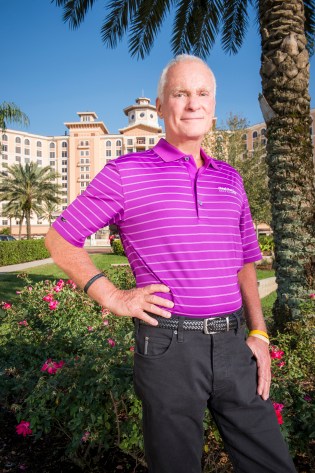 Despite the drawbacks of testing, many major employers are moving forward in an effort to keep workers safe.

St. Louis-based Watlow, a global manufacturer of thermal products with 1,600 U.S. employees, this month began testing workers who believe they may have been exposed to people with COVID-19, as well as workers who are traveling to its Mexico plant, to see if they have the virus or previously had it and now have antibodies for the disease. In addition, the temperatures of all employees are taken when they arrive for work, and anyone above 99.2°F is sent home. Employees wear masks on the job, and barriers were installed between some workstations to promote social distancing.

As of May 6, Watlow has tested fewer than a dozen people at its onsite health clinic, said Sheryl Hicks, vice president of human resources. The company is weighing whether it can or should test everyone.

“We are learning as we go,” Hicks said. “There is a cost to these things, but if it gives us more information to keep people safe or provide a safer environment for folks, then that is not necessarily a bad thing.”

Correction: This story was updated on May 13 at 3:40 p.m. ET to correct a detail about how the company is screening workers. Employees will get their temperatures taken when they arrive to work, and those with readings above 100.4°F will not be allowed on the site.

Looking For A Path To Reopen, Employers Weigh COVID Testing Of Workers