A five-block section of downtown Los Angeles that used to be part of the city’s Toy District has become ground zero for the nation’s counterfeit cannabis trade. While a few remaining stores sell fidget spinners and stuffed animals, the majority are hawking vape cartridges, e-juice flavors, vaporizers and other wholesale smoking and vaping supplies — including knockoffs that originated in China.

The vaping industry is under scrutiny as more people fall ill with a mysterious respiratory illness linked to e-cigarette use. Health officials are investigating more than 1,600 cases in 49 states and the District of Columbia, including 34 deaths. In California, more than 135 residents have fallen ill, at least three of whom died, according to the California Department of Public Health.

Although it’s unclear what exactly is causing the illness, Centers for Disease Control and Prevention officials said most of the patients used products containing THC, the main psychoactive component in marijuana — particularly from products obtained off the street, from friends or family, or from illicit dealers.

In Los Angeles, some shop owners blame the vaping illnesses on untested products and devices sold to consumers on the black market — even though some are themselves part of that distribution chain. 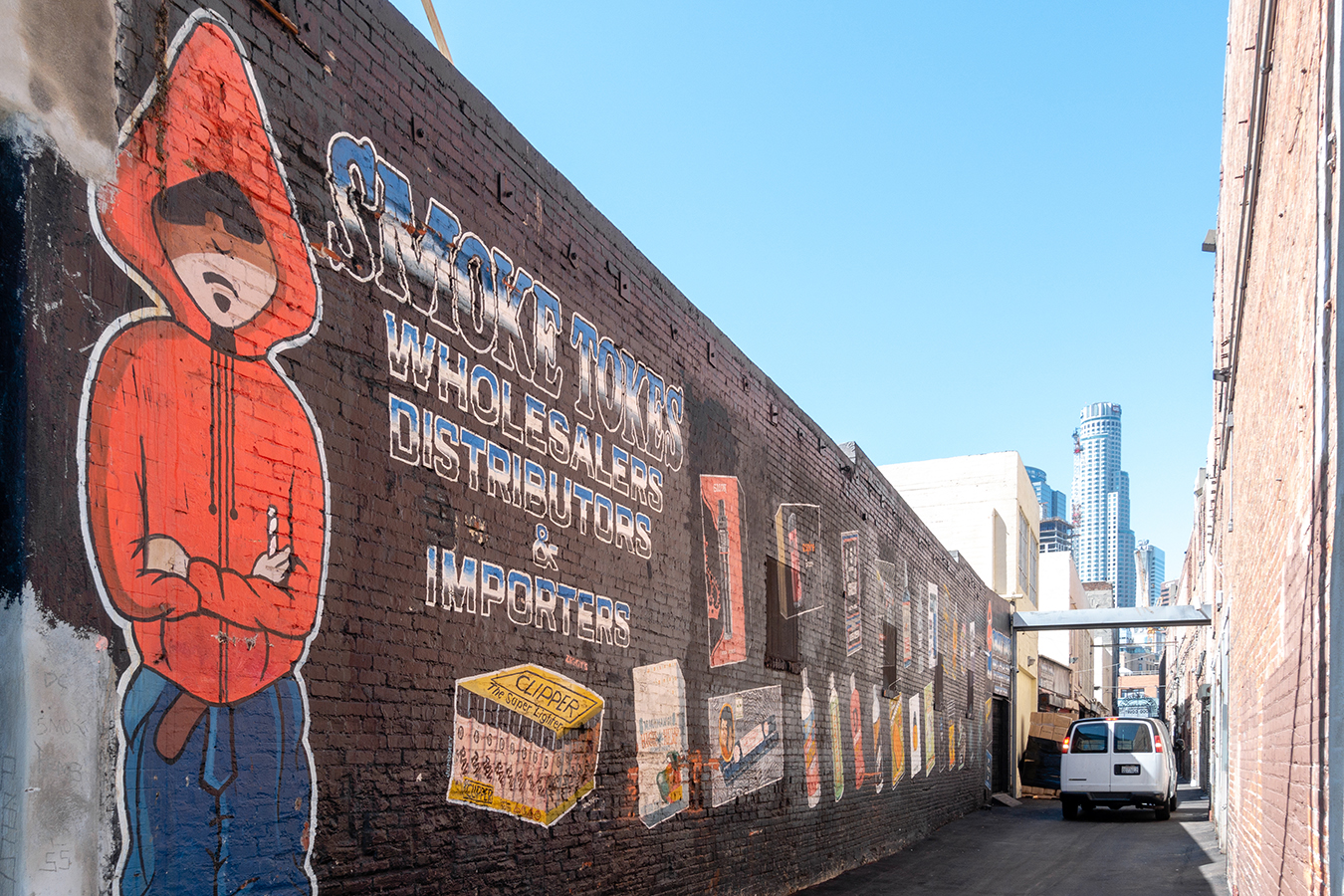 Shipments of vaping supplies arrive in the alleyways behind dozens of wholesale shops. The seedy district is bounded by Skid Row on one side and Little Tokyo’s skyscrapers on the other. It is considered a black-market gateway to the United States, allowing the production and sale of fake products to flourish. (Heidi de Marco/KHN) 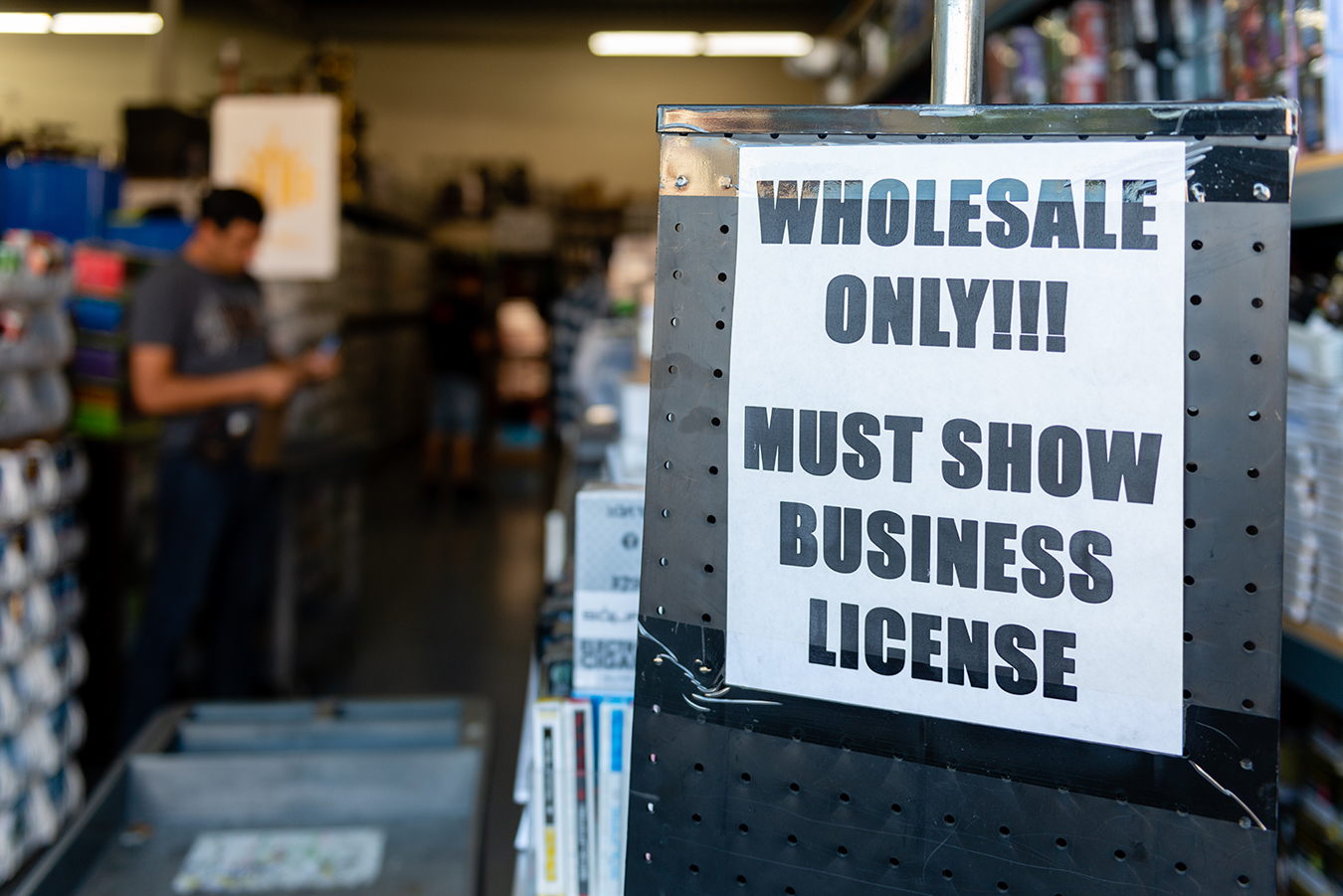 The warehouses here sell only to wholesale buyers, most of them retail vape shop owners who descend from around the state with shopping lists literally in hand to buy trending vape flavors, cartridges and box mods in bulk. Some shop owners, who consider themselves legitimate, say bootleggers are buying ripoff vape packaging and cartridges mimicking popular brands and filling them with potentially dangerous counterfeit products. (Heidi de Marco/KHN) 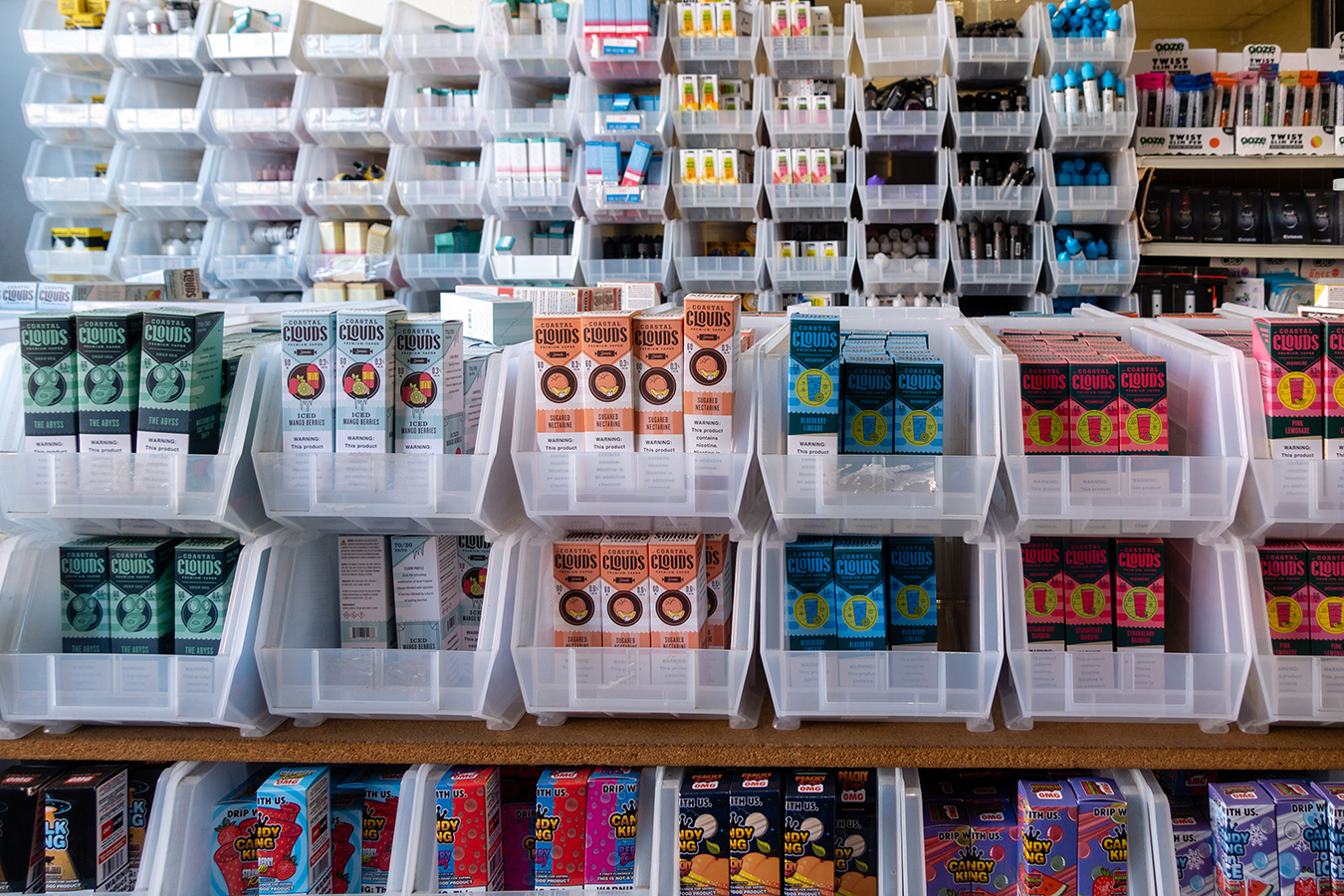 Vape flavors on display at a wholesale shop on Fourth Street tantalize buyers with names like “Sugared Nectarine” and “The Abyss.” There are thousands of e-liquid flavors, which are typically made by mixing nicotine and flavorings with a solvent, often propylene glycol. A study in the journal Nicotine & Tobacco Research suggests that mixtures of certain ingredients and flavorings can create entirely new and potentially dangerous chemicals. The Mayo Clinic reported in early October that the vaping-related illnesses are most likely caused by noxious chemical fumes, and that the lung damage resembles a chemical burn. (Heidi de Marco/KHN) 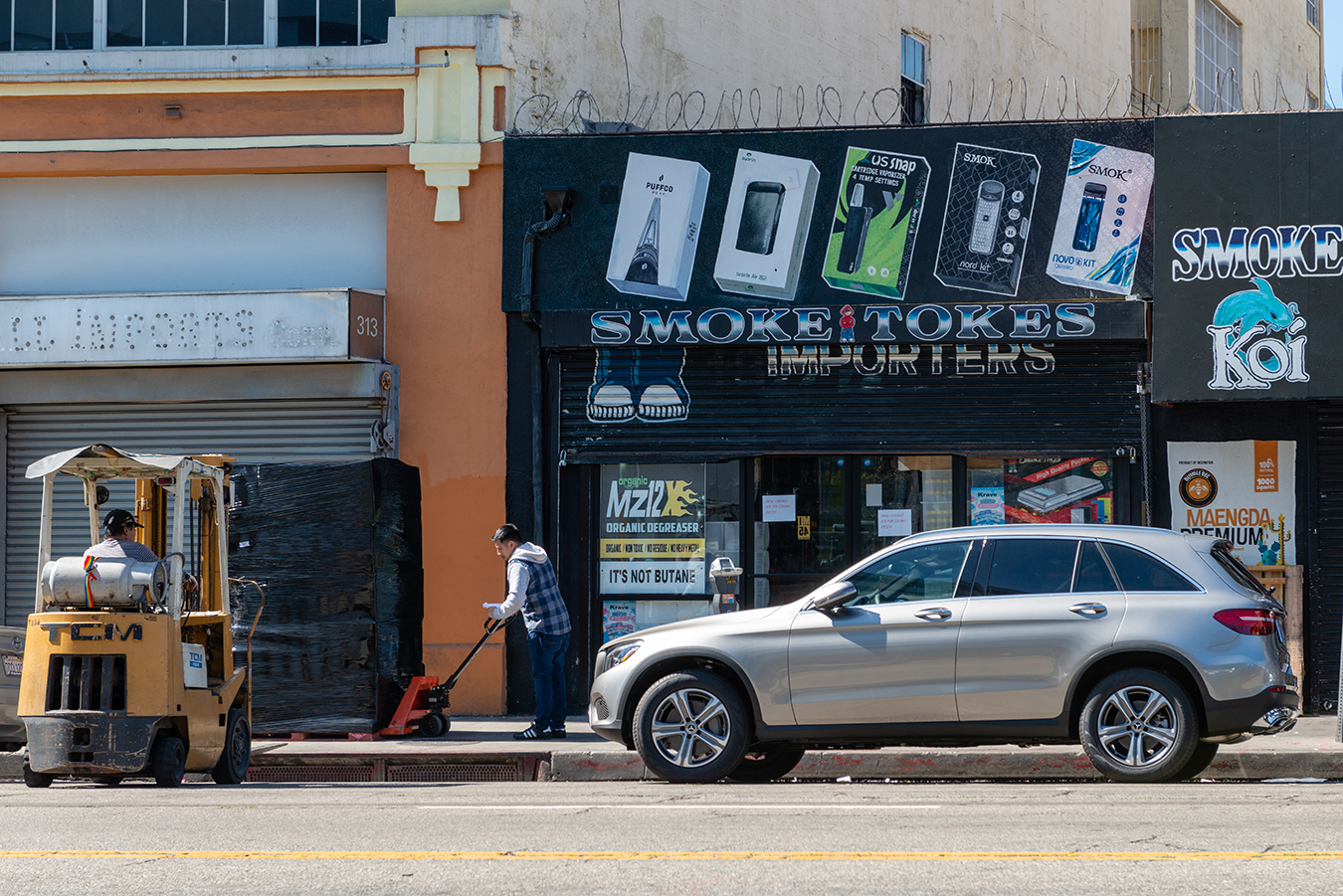 Vape shop employees unload a shipment. The Food and Drug Administration advises consumers to avoid black-market cannabis products, which could contain pesticides, heavy metals or other dangerous contaminants. In California, legal products are tested and monitored by the state’s “track-and-trace” system, and consumers can look for package tags to confirm the authenticity of a product. (Heidi de Marco/KHN) 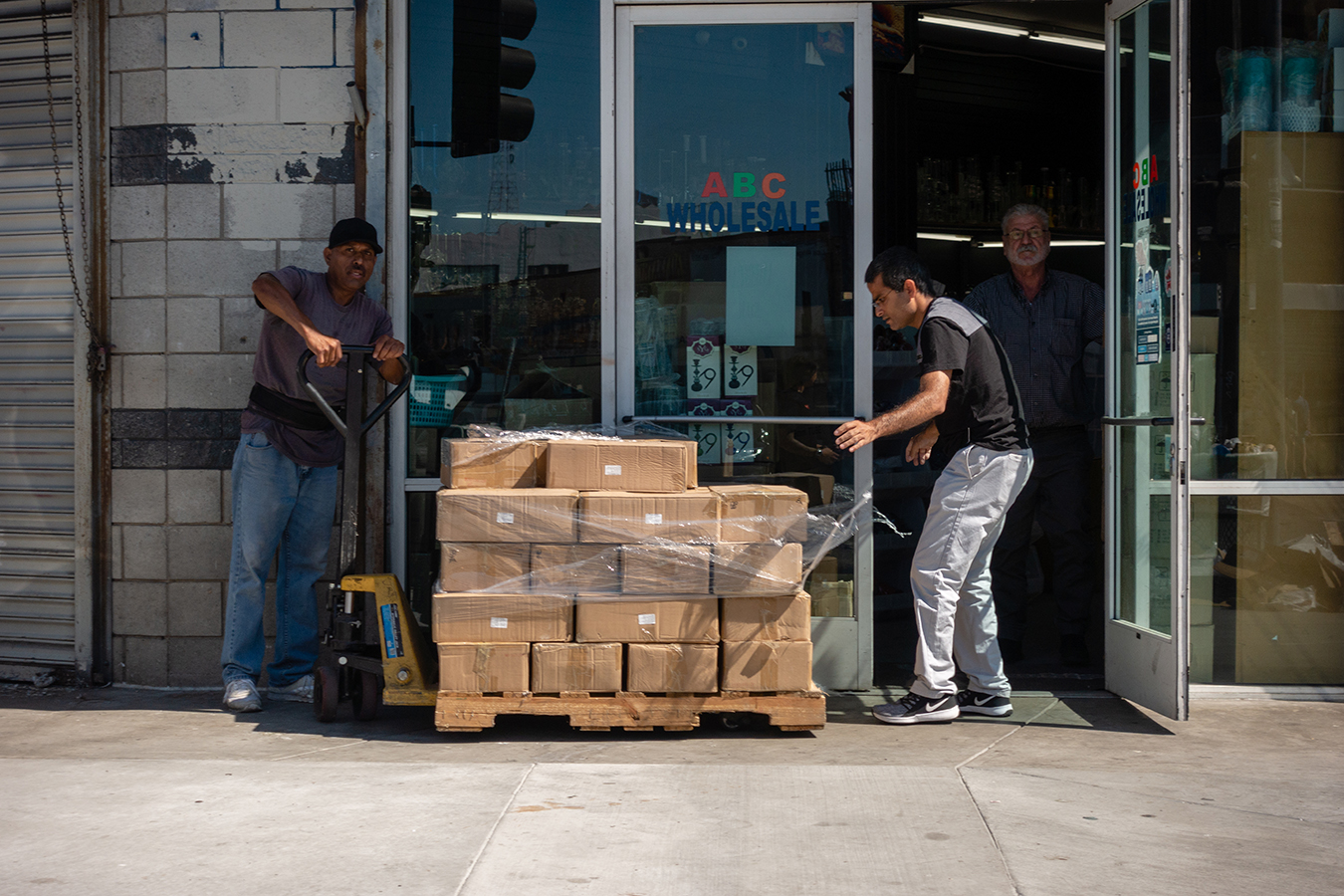 Boxes of vape products, origin unknown, arrive at a vape shop in downtown Los Angeles. Sellers of counterfeit goods are spooked by the increased attention — and the hit to their businesses. The Food and Drug Administration has launched a criminal investigation into the illnesses with the Drug Enforcement Administration, a probe that isn’t focused on individual vapers, but on the manufacture and distribution of illicit products that sicken people. “You can buy counterfeit juice and cartridges here, but I haven’t seen some of the people that sell them. They got scared of the news,” said an employee who didn’t want his name used. (Heidi de Marco/KHN) 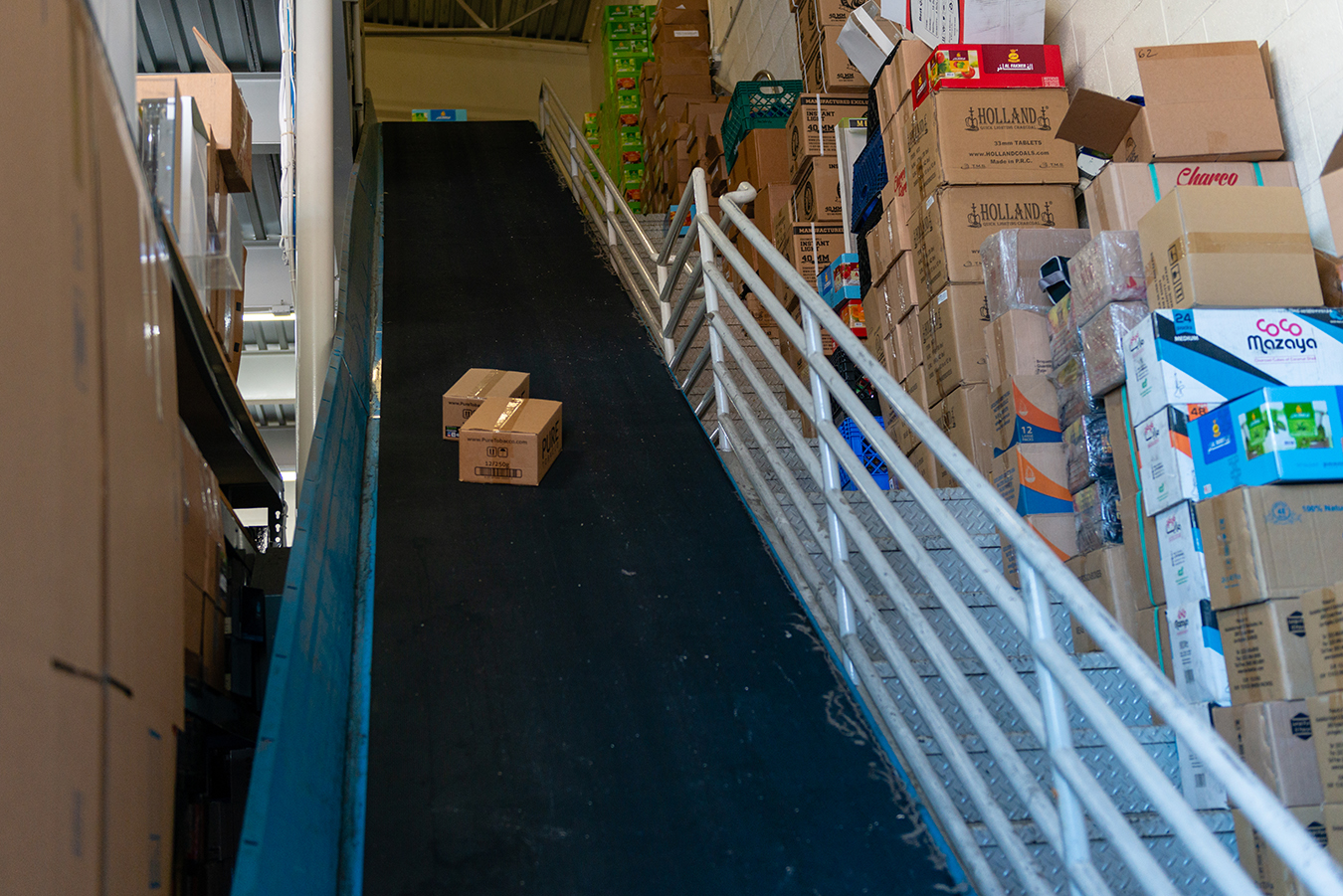 A conveyor belt moves boxes at a vape warehouse. The California Department of Public Health is urging everyone to quit vaping, “no matter the substance or source,” while the investigations into the illnesses proceed. The CDC also advised people to “consider refraining” from using e-cigarette products, especially those that contain THC. (Heidi de Marco/KHN)