The public outrage over high-priced hepatitis C drugs is taking a new twist as Louisiana’s top health official proposes using an obscure federal law to get the medicines at a much lower cost. If successful, other states could reap the benefits.

Right now, covering treatment for the 35,000 of Louisiana’s uninsured and Medicaid-dependent residents with hepatitis C would cost the state $764 million, a staggering sum that would have to be pulled from schools, public services and infrastructure programs. Louisiana’s budget runs $31.2 billion a year, but its discretionary line items, such as health care, account for just $3.6 billion.

“We don’t have the resources,” said Dr. Rebekah Gee, the state’s health secretary.

In an April 12 letter, Gee reached out to the nation’s top health experts to explore tapping a patent law created in 1910 that gives federal regulators the power to appropriate inventions and develop a product in the interest of the public good.

The law has been used before by government agencies, including the Department of Defense. In the 1960s and early ’70s, the government used it to buy several medicines at a lower cost, according to Hannah Brennan, a co-author of a 2016 paper on the law.

In response to Gee’s request, Dr. Joshua Sharfstein, an associate dean at Johns Hopkins Bloomberg School of Public Health, spent a recent afternoon with some of the country’s top academic and legal health officials considering the challenges of using the law, called U.S. Code Section 1498 under Title 28. 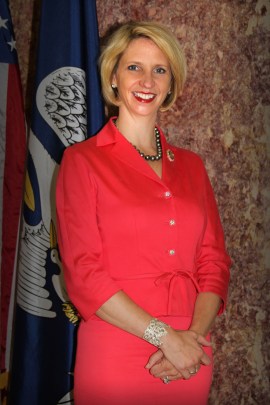 They concluded it should be tried.

“This is the path that would be the most viable to be able to get what you need for people in Louisiana,” Sharfstein told the group. Sharfstein, a former Maryland health secretary, was also the Food and Drug Administration’s deputy commissioner in the Obama administration.

Under the law, the Trump administration could sidestep patents and contract with a generic supplier to provide a lower-priced version of expensive antiviral drugs such as Sovaldi and Harvoni, which are made by industry leader Gilead Sciences.

The government would have to pay the drugmaker only reasonable compensation and prove that using the product benefits the U.S. government. And a favorable ruling for Louisiana would mean the strategy could be used across all 50 states.

Gee, who is working to raise bipartisan support to force a change in hepatitis C drug prices, said she believes the use of the patent law could be a “win-win” for the state and industry.

“Pharma needs to think about different approaches to profitability,” Gee said. “Sometimes quantity can be an important driver of profit, not just the price of each unit of this drug.”

Her proposal would ultimately need approval from Health and Human Services Secretary Tom Price, who oversees the federal agency that administers Medicaid. During his confirmation hearings, Price said he would be committed to making certain that drug prices “are able to be afforded by individuals.”

As a physician and longtime senator from Georgia, Price’s record indicates that he believes government influence should be reduced in health care and during his confirmation hearing praised a Medicare Part B program that allowed privately owned pharmacy benefit managers to negotiate drug prices.

Rachel Sachs, associate professor of law at Washington University in St. Louis who attended the Johns Hopkins meeting, said she believes “the case is strong” in invoking the law, even though drug companies may have multiple patents and exclusivity periods to protect their drugs.

“The federal government has a direct financial interest in controlling hepatitis C,” Sachs said, noting that many of those infected are covered by public programs like Medicaid or the prison system.

And, in 2015, the federal government’s Centers for Medicare & Medicaid Services said states should not unreasonably restrict coverage of the treatments for people with the disease. Last year, 324 Louisiana Medicaid enrollees were treated for an average price of $85,000 each.

The Pharmaceutical Research and Manufacturers of America, the trade association for drugmakers, declined to comment on the potential use of the law. Gilead did not return calls for comment.

The high prices of hepatitis C drugs have been an ongoing concern for public health officials. Last year, the National Association of Medicaid Directors asked Congress to take action, calling hepatitis C a “pervasive public health threat.” And last month, the National Academies of Sciences, Engineering and Medicine recommended its own plan to lower drug prices for vulnerable populations in order to solve the “serious public health problem.”

Hepatitis C infections, which spread through blood or other bodily fluids, are usually silent for many years until the virus damages the liver enough to cause symptoms such as jaundice and fatigue. People can spread the disease unwittingly and an estimated 2.7 million Americans now have chronic hepatitis C.

Dr. Peter Bach, director of the Center for Health Policy and Outcomes at Memorial Sloan Kettering Cancer Center in New York, has created an online budget allocator tool to show how impossible it is for Louisiana to treat its Medicaid population without a lower price.

The tool, using estimates of drug costs from Gilead’s public filings, shows where millions of dollars would need to be shifted in the state’s discretionary budget to pay for hepatitis C treatments. For instance, cutting K-12 funding by $26 million — taking benefits away from about 3,500 students — would cover treatments for 3,176 hepatitis C patients.

Too often, Bach said, discussions about costs do not illustrate the trade-offs.

“These numbers are so large that it’s very difficult to think about them proportionately,” said Bach, who has also suggested that the U.S. government simply buy Gilead to lower the cost of treatments.

Brennan told the group that the Department of Defense’s Military Medical Supply Agency relied on Section 1498 to procure 50 drugs during a three-year period for a total savings of $21 million. In one example, the government procured the antibiotic nitrofurantoin for nearly four times less than the patent holder’s price.

“This was … a really important and routine use,” she said.

In the 1970s, use of the law for purchasing medicines petered out, Brennan said, likely because of pharmaceutical lobbying and the increasing importance placed on protecting patents.

But that has not stopped other government agencies from continuing to tap the law. Brennan’s paper notes that the government routinely relies on the patent law to act in the public’s interest for inventions ranging from electronic passports to genetically mutated mice. The U.S. Army Corps of Engineers used the law to clean up hazardous waste and, over the past decade, it was also used by the National Institutes of Health, National Gallery of Art, National Park Service and General Services Administration, according to the paper.

In 2001, Tommy Thompson, then-secretary of the Department of Health and Human Services, threatened use of the law to gain a lower price on the anthrax drug Cipro. And in 2015, Sen. Bernie Sanders (I-Vt.) asked the Department of Veterans Affairs to use the law to decrease the price of hepatitis C drugs.

“This is exactly the moment and exactly the kind of scenario where we should” use such a law, Bach said.