She’s tethered to an oxygen tank 24/7 and uses two drug inhalers a day, including Spiriva, which she called “the really expensive one.”

The 67-year-old’s chest was heaving one recent morning from the effort of walking down the hallway into the kitchen. Her voice was constricted as she loaded medication into a device about the size of her palm.

“Capsule in. You close it and you push this blue button,” Milton said, demonstrating how the device punctures the pill. She then takes two labored breaths to inhale the powder inside the capsule. “And that’s it.”

Milton, like many Medicare enrollees, is on a fixed income. She has $2,000 a month to pay for a mortgage, car payment, Medicare premiums and other expenses.

“I got to stretch out that, plus I have the less costly medicines that I have to pay for and also my oxygen,” Milton said. “You can only stretch it so far.”

An estimated 1 in 9 Medicare beneficiaries are diagnosed with chronic obstructive pulmonary disease, or COPD. And, in 2014, COPD was the third-leading cause of death in the country, according to the U.S. Centers for Disease Control and Prevention. Inhalers like Spiriva and Advair account for billions in Medicare spending each year.

Yet, even if responsible only for monthly copays, many enrollees like Milton can’t afford their inhalers. Milton depends on free samples provided by her doctor for her prescription of Breo Ellipta — the supply is limited, so she regularly skips one of the two daily doses. And she received one year’s worth of free samples for Spiriva after applying for drugmaker Boehringer Ingelheim’s financial assistance program.

Milton was down to two doses of Spiriva one recent morning. Holding up a silver sleeve of medication, Milton said: “This is all I have left. So, if [the drugmaker doesn’t] approve me for this year, I’m going to have to ask Dr. Stigall if there’s something else I can take.”

That would be Dr. Brian Stigall of Hill Country Medical Associates in New Braunfels, Texas, who keeps a closet full of free drug samples for patients like Milton.

“Thank goodness, the drug reps are good. They bring us lots of samples,” Stigall said. “I save those samples back for those Medicare patients.” 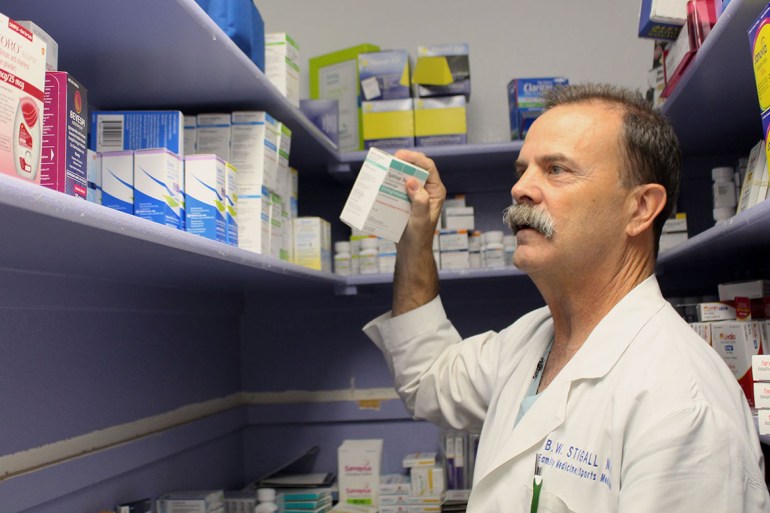 Dr. Brian Stigall of Hill Country Medical Associates says he worries about the cost of the inhalers and saves samples for his Medicare patients, such as Juanita Milton. “I think we all do it because we want to help our patients,” Stigall says. (Sarah Jane Tribble/KHN)

Patients who suffer a full-blown attack, due to low oxygen intake, could need three to seven days of emergency treatment, Stigall said.

Retiree Ken Wagar, who lives in Winter Haven, Fla., buys his inhalers overseas. Instead of paying Medicare copays of more than $500 for three-month supplies of Advair and Spiriva, Wagar pays $248 for the same amount of Advair and $73 for Spiriva.

“It’s common and easy,” said Wagar, 68. “You have to order in advance because it takes awhile to ship. … You do what you have to do.”

Across the country, doctors who treat COPD said costs are a common problem for patients. Dr. David Mannino at the University of Kentucky College of Public Health said some patients cut pills in half or take a prescription once a day instead of twice, just to save money.

Dr. Momen Wahidi, a pulmonologist at Duke University School of Medicine, said many patients “weren’t able to use [an inhaler because they] couldn’t get it, couldn’t afford it.”

Dr. Peter Castaldi of Brigham and Women’s Hospital in Boston surveyed thousands of Medicare patients in 2006. Up to a third said they couldn’t take their medication because of cost.

“Even at a relatively seemingly low amount of $20-per-month out-of-pocket costs, you could see the effects of cost on people being able to take their medications,” Castaldi said.

Spokespeople for both drug companies said insured patients would not pay those prices because of discounts, rebates and other price concessions negotiated with insurers and pharmacy benefit managers. For example, GlaxoSmithKline estimated that the average out-of-pocket cost for patients with Medicare’s drug coverage, Medicare Part D, was $33 in 2015, when the drug’s list price was $281 for a month’s supply.

But it’s “not unusual [for patients] to be on more than one inhaler” and those costs add up, said Dr. Chien-Wen Tseng, with the University of Hawaii John A. Burns School of Medicine and the Pacific Health Research and Education Institute.

In a recent letter published in JAMA Internal Medicine, Tseng analyzed Medicare’s prescription drug formularies in 2015 and the projected cost of deductibles and copays. She found that Medicare Part D beneficiaries with multiple inhalers could spend more than $2,800 in out-of-pocket costs annually.

The high price of inhalers is expensive for the Medicare program and “drives people into the doughnut hole,” she said. The dreaded doughnut hole is a coverage gap for Medicare Part D patients. Enrollees pay more for drugs out-of-pocket once the coverage gap is reached.

“Medicare Part D was really designed in 2006 with 2006 prices,” Tseng said. In 2017, with much higher drug prices, “does Medicare Part D really still work?” she asked. 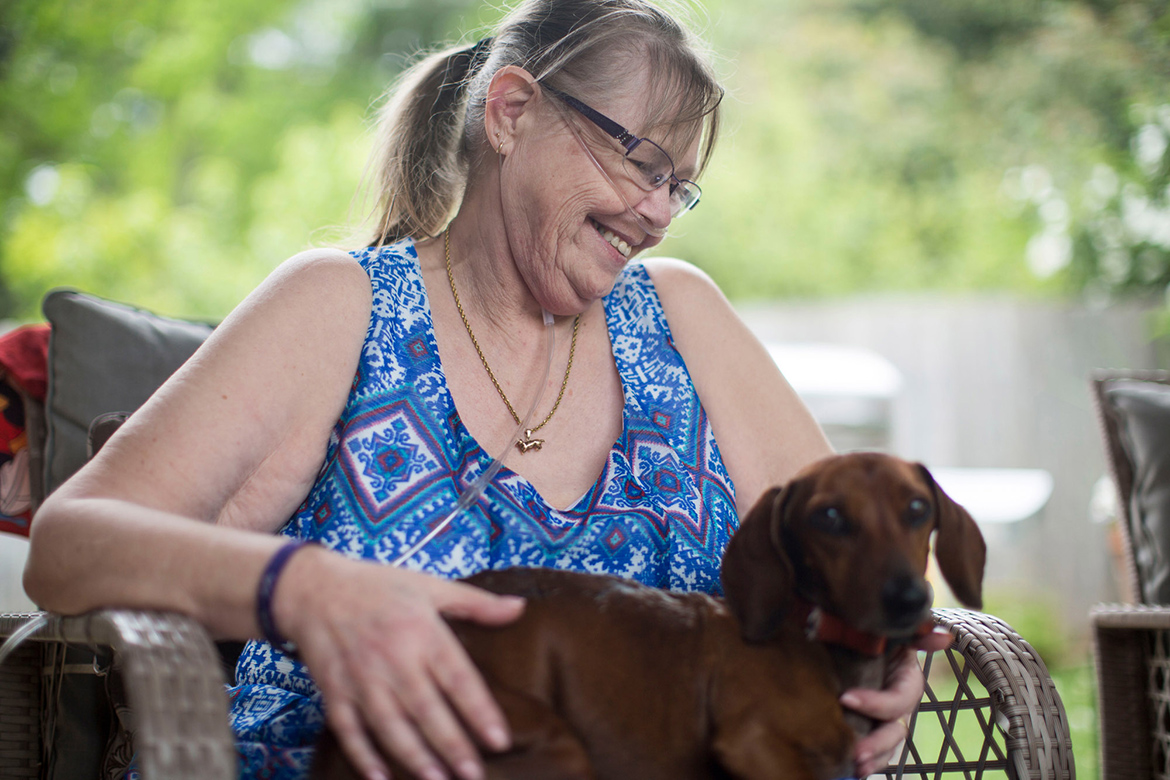 Milton pets her dog, Axel, at her home in Live Oak, Texas. Every morning she sits on her patio drinking coffee, petting her dogs and talking to God, she says. (Carolyn Van Houten for KHN)

For Milton, the answer seems obvious: It doesn’t. Most mornings after taking her Spiriva, Milton sits on her back patio. There, she talks with God.

And that conversation often turns to her struggles with COPD.

“I understand and I have to accept it. I know that it was my doing,” Milton said, adding, “everything is in his hands.”

Editor’s note: After this story was published, GlaxoSmithKline, which manufactures Breo Ellipta, noted that the drug is not intended for twice-daily use.

Many COPD Patients Struggle To Pay For Each Medicinal Breath