BOSTON — Sarah Bechta, a wife, mother and physician from Northborough, Mass. sat down at her kitchen table with a folder full of brochures, pages from insurance websites and a hand-drawn spreadsheet to try to find out if a new “tiered” health plan would be the cheapest option for her family. 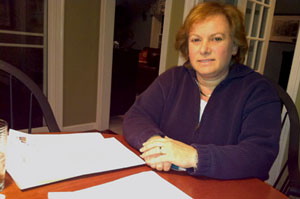 She started by comparing her premium for traditional insurance and a tiered plan. Tiered insurance is being offered by various companies in Massachusetts as a way to meet employers’ demands for cheaper insurance premiums.

A tiered plan would cut Bechta’s premium in half and “would save about $1,400 a year. It made me stop and think,” she said.

But would she actually save that $1,400 or would it be eaten up in higher co-payments and deductibles?

“That was the thing that was really hard to predict. I could not figure it out,” Bechta said, even though, as a doctor, Bechta believes that she’s “as capable, or more capable, than everybody else who’s looking at this information.”

Bechta ran a few test cases. What would she pay, for example, if her daughter had appendicitis? Bechta would take her daughter to the hospital her pediatrician recommends, “which is typically to MetroWest Medical Center in Framingham, but also Children’s (Hospital), or possibly to UMass (Memorial Medical Center). Each of those hospitals was different tiers,” Bechta said.

Which means that the cost of using these hospitals would be different for Bechta, possibly very different. Most insurers rate Children’s as a tier 3, or high-cost hospital, and would charge Bechta between $2,000 and $2,500 for a hospital stay. At MetroWest, which is a tier 1 hospital, the charge would be $500 or less. So one visit to Children’s, or any other tier 3 hospital, would wipe out Bechta’s premium savings.

But let’s say there are no trips to the hospital for the Bechtas this year. What would they pay for routine office visits?

“These are the different physicians I use, the primary care providers, eye doctors,” Bechta said, pulling out a simple chart she made with the names of all her family doctors down the left side of the page and the names of the insurance companies across the top. In the boxes, where the names of the doctors and insurers intersect, Bechta had a 1, 2 or 3 for the cost and quality tier assigned to each doctor.

“All of our primary care doctors were in different tiers for different health plans,” Bechta said, pointing to the numbers. “There’s no way my pediatrician can be tier 1 for one insurer and tier 3 for another, it just makes no sense.”

But it is happening. Here’s a glimpse into why.

“Massachusetts is in the vanguard with these plans,” says Alwyn Cassil at the Center for Studying Health System Change.  Cassil says large employers have not been willing to try this type of coverage in other states because the savings aren’t worth the change.   And Massachusetts is unusual, says Cassil “because of the (insurers) ability to include hospitals.” In many states, hospitals can demand to be placed in the top tier of an insurance plan as a contract condition, but not in Massachusetts.

The Bay State will soon require that health insurers use the same set of quality criteria. But hospital and physician ratings will still vary because insurers will still weigh the criteria differently and because the prices insurers pay for office visits, tests and procedures are not the same.

But if there’s no agreement on which hospitals and doctors deserve the best or worst ratings, then how, asked Bechta, can the insurers claim that these plans are driving patients to the lowest-cost, best-quality providers?

“It doesn’t lead me to conclude that I can make an educated choice about a hospital and say I’m going to save the system money by going here,” Bechta said, “because the next person who has a different insurance plan is not saving money by going there and they’re getting the exact same test or procedure that I’m going to get.”

Bechta said there’s a lot of confusion among her patients about what the tiers mean. One woman thought Bechta, who is rated a 1, 2 and 3 with three different health plans, was charging a higher co-payment because Bechta is a better doctor.

“Whereas really what the insurance company was trying to say is, ‘You’re paying more for this doctor because she’s less cost-efficient,'” Bechta said, shaking her head.

The state’s top three insurers say they are concerned about confusion as members get used to their new type of insurance.

“One of the things we’ve been trying to do is to make sure members know that doctors and hospitals are tiered based on quality and the efficiency of their care,” said Jonathan Chines, the director of commercial provider engagement at Tufts Health Plan.

“All of the health plans need to create easier-to-understand products with easier-to-use support tools, so that a consumer can find the knowledge we want to make available to them and use that knowledge to make health care decisions,” said Richard Weisblatt, senior vice president for provider network and product development at Harvard Pilgrim Health Care.

Bechta spent six to eight hours on her decision to stay with her traditional HMO plan.

Insurers say a growing number of employers are offering tiered insurance plans because they are the best way to lower premiums while still giving consumers some choice in where they go for care. Limited network plans that restrict where patients go for care in exchange for lower premiums are the other option many employers are considering as they try to hold down rising health care costs. Insurers are watching the consumer response to these plans with great interest.

“Will members prefer tiered plans where there is some work on their part to figure out what their cost share is going to be for certain providers or would they rather something very simple but more limited, where the network doesn’t include every provider in the state?” asked Dana Safran, senior vice president for performance measurement and improvement at Blue Cross Blue Shield of Massachusetts.