Here’s an essential question: Is it possible to actually list prices for childbirth, MRIs, stress tests and other medical procedures? And will patients, armed with health care prices, begin to shop around for where (and when) they “buy” care? 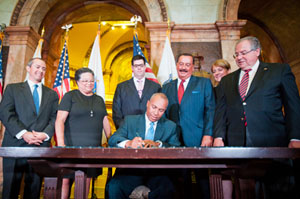 Massachusetts is trying to find out with a new requirement that hospitals and doctors tell patients how much things cost, if they ask. It’s part of the state’s health care cost control law and we set out to run a test.

Our shopper: Caroline Collins, a 32-year-old pregnant real estate agent from Fitchburg who is trying to compare prices for a vaginal delivery. Her first call is to the main number at Health Alliance Hospital in nearby Leominster. From there, she is transferred to the hospital’s obstetrics department. A receptionist there tells Collins to call the billing office at UMass Memorial Medical Center in Worcester, which is part of the same hospital network as Health Alliance.

Collins doesn’t mind this transfer. She had intended to get a second price quote from UMass Memorial anyway.

When the phone is answered, Collins launches right in: “I’m due in June and my husband and I have pretty minimal coverage, just a really high deductible, so I just wanted to check and see what the cost would be.” Collins’ deductible is $3,000 a year, but she expects the delivery to cost more than that. She just wants to know how much more.

Collins is directed to the extension of someone named Cathy, who apparently has the price list for services at UMass member hospitals. She leaves a message. Cathy will be out for two weeks.

Collins tries another number in the billing office at UMass Memorial and leaves another message.

She moves on to Emerson Hospital where she’s transferred from the main switchboard four times before leaving a message for a woman who has not called back after two days. Massachusetts law requires a callback within two days.

The only place where she reaches a person who gives her a price after one call is a natural birth center called the Birth Cottage. Their price: $3,000 – $5,000 for a normal vaginal delivery.

Into her third day shopping by phone, Collins gets a return call from a woman at UMass Memorial.

If her delivery turned into an emergency C-section, the cost would be between $20,000 and $30,000 “depending on the operation and how it went,” Collins says. For a more exact price, Collins is told she will need a CPT code — a number assigned to any test or treatment you may need. Collins called her obstetrician, but a woman in the front office said she didn’t have the CPT codes and suggested Collins call the hospital back.

Collins is told she will probably only have to pay her $3,000 deductible of whatever the price is in the end, but she’s not sure. She’s getting conflicting information about what is and isn’t covered from her OB, hospitals and her insurer. (By the way, insurance companies had to start providing prices last October.)

No one said this would be easy. Each hospital negotiates prices with each insurer. Sometimes the hospital and physician charges are separate, sometimes they are not. And then, what the patient pays on top of their premium varies if they have a deductible or coinsurance.

“The main thing I wanted to find out was whether I would have any surprises,” Collins says. “I kind of wanted to be prepared for that. It sounds like I will be OK, but you never know until it’s over, so I guess I’ll find out.”

Collins is used to the challenge of searching for health care prices because she was uninsured for a while in her 20s. So does she feel like anything has changed now that hospitals and doctors are required to quote patients a price within two working days?

“The experience was pretty frustrating from beginning to end,” she says. “It was definitely surprising how many machines I spoke to within the last few days.”

This is the world in which Collins is supposed to become a savvy health care consumer, making informed decisions about where to get the best care at the best price.

Both Emerson Hospital and UMass Memorial Health Care say they are committed to making prices easily available for patients. A spokeswoman for Emerson says she was dismayed that Collins did not receive a prompt response.

UMass Memorial Health spokesman Robert Brogna says it is “working through some challenges in the early days of the new requirements, and some interactions have clearly been less than optimal. This will change. In the coming weeks we will be providing a phone line and establishing new policies and procedures to support this new requirement.”

“It’s very different from, you go into Best Buy, you want to buy a refrigerator,” says Karen Granoff, the senior director for managed care at the Massachusetts Hospital Association. Granoff says her members are working with insurers to nail down prices that hospitals can quote patients.

“They know they need to do this,” Granoff says. “They are not opposed to the transparency. I think they are worried about the challenge of getting the information to the patient.”

Doctors are also now required to give patients the price of anything they need within two days of a patient’s request. Some large physician groups such as Harvard Vanguard have software that can calculate exactly what your expense will be based on the details of your insurance plan. But many doctors, especially those in small practices, aren’t familiar with the requirement. The state has no authority to make physicians participate.

Dr. Ron Dunlap, president of the Massachusetts Medical Society, says giving patients prices is a good idea, “but I think this project is somewhat of an overshoot. It’s just too broad, there are too many different procedures. My thought is that we should focus on the most frequently used expensive procedures and that’s where most of the savings could be achieved.”

There are no plans to revise the pricing requirement. The state’s undersecretary for the Office of Consumer Affairs, Barbara Anthony, says the time has come to put price tags on health care.

“It’s kind of, ridiculous, is the word that comes to mind, that we’re actually talking about the pros and cons of whether consumers should know how much their health care costs,” Anthony says. “I mean what other commodity or service do we ever debate whether or not a consumer should know the price of a service before purchasing? You can’t even name one.”

This story is part of a collaboration among NPR, WBUR, and Kaiser Health News.

Mass. Patients Can ‘Shop’ For Health Care — At Least In Theory