Wondering how your county measures up on health?

The 2012 County Health Rankings are out this week from the University of Wisconsin Population Health Institute and the Robert Wood Johnson Foundation.

The rankings assess the health of nearly every county in all 50 states and the District of Columbia, and they allow you to compare rankings on a handy calculator of key health indicators, including their percentage of uninsured citizens: 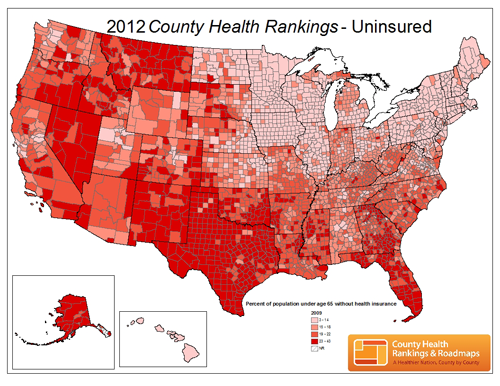 And number of preventable hospital stays: 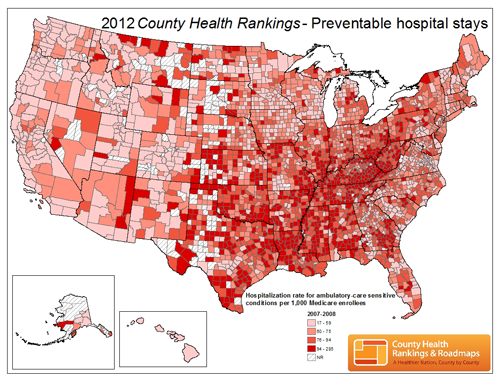 The rankings also compare the ratio of people to primary care physicians, diabetes screenings, average life expectancy and other key metrics.  You can also measure other factors linked to health, such as education, poverty levels and availability of both fast food and healthy food options.

In general, counties with the highest life expectancies and quality of life have lower rates of smoking, teen births, preventable hospital stays, unemployment and poverty. They also had better access to primary care physicians and higher levels of education. But those healthy counties were no better than unhealthy counties on rates of binge drinking, obesity or healthy food options.

Dr. Patrick Remington, director of the county health rankings project at the University of Wisconsin, says the rankings show “a web of causation” for poor health. “Our data show it would be preposterous to think we could solve health care issues with a single policy approach.”

Instead, he says the conversation about health needs to move beyond only medical coverage to encompass the many contributing factors, including education, poverty, and access to healthy foods. Reducing health care spending requires “redesigning communities so that churches, schools and neighborhood organizations are also part of the solution.”

Under a new federal policy, Medicare is preparing to penalize hospitals with frequent readmissions, which by one estimate cost the government $12 billion a year. Remington says that policy requires more than just a change in the hospital’s discharge policy; the whole community must be involved.

He points to Sheboygan, Wis., where the local health system partnered with nearby schools to improve their athletic facilities and leave them open over the weekends for public access. “Now, when you discharge patients with congestive health failure from the hospital, they can actually go to their neighborhood school for exercise,” which in turn, can help keep those patients healthy and out of the hospital.