After completing a medical rotation in pediatrics, Hannah Kirsch was looking forward to starting another one in psychiatry at New York City’s Bellevue Hospital – but then Hurricane Sandy hit. Kirsch is among about 170 third-year and fourth-year medical students at NYU School of Medicine who were required to change their plans after two of NYU’s academic training hospitals, NYU Langone Medical Center and Bellevue, temporarily closed due to extensive flood damage. 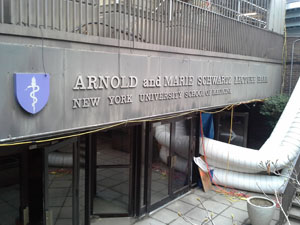 The hospital closures left them with two options: take their rotations at other New York-area hospitals or defer them to a later time – possibly early next year when Langone and Bellevue are expected to reopen.

Kirsch, a third-year medical student, chose to defer her psychiatric rotation and instead began an elective course in neuroimmunology at Johns Hopkins University School of Medicine. “This is going to help in my applications. … I’m working somewhere that’s number one in the country in what I want to do,” she said, adding that she hopes to begin a residency program in neurology after medical school.

Dr. Lynn Buckvar-Keltz, associate dean for student affairs at NYU Langone, said “students just have had some minor concerns.” Most are interested in training at Bellevue, she said, and some “have chosen to defer their clinical rotation at Bellevue [until it’s] back up and running.”

She said a limited number of Bellevue outpatient clinics reopened in late November, allowing some medical students back on site. Bellevue Hospital, however, won’t fully reopen until February.  NYU Langone Medical Center expects to fully reopen by the end of January.

Buckvar-Keltz said many medical students have found it “interesting to go to another hospital and see how medicine is practiced differently.” Their experiences with Hurricane Sandy, she said, have even helped many fourth-year students distinguish themselves from other applicants during medical residency interviews.

“I think in the aftermath, our students, as well as everyone here at the NYU medical center, have really been impressed with how the community has come together, helped each other,” Buckvar-Keltz said. “It’s really a good feeling and good vibe here. They’re interested in staying here [at NYU] for residency.”