States continue to struggle with Medicaid costs, a factor that looms over their tepid economic recovery, according to a report released Tuesday. 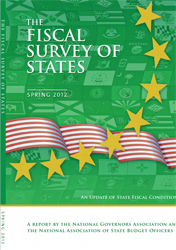 The economic outlook for the states is starting to brighten, but growth is slow and budgets still are tight, said the National Governors Association  and the National Association of State Budget Officers in their semi-annual fiscal survey of the states.

Part of the problem is Medicaid. While state spending on the program isn’t expected to grow as dramatically in the coming year as it did in the past two years, the costs still are a burden, according to the report.

“With the growth of Medicaid expenditures, spending priorities will again face competition for state budget dollars this fiscal year,” said Dan Crippen, the executive director of the NGA, in a statement.

The reasons for the spending growth include the lackluster labor market, which means fewer people are insured through their jobs and instead turn to Medicaid for coverage, and the growth in costs throughout the health care system, according to the report.

The federal government currently pays at least half and as much as three-quarters of Medicaid costs, depending on the state. The 2010 health law calls for a massive expansion of the Medicaid program and the federal government will cover 100% of the cost for the new beneficiaries for the first few years (gradually reducing that to 90 percent by 2020).

State Medicaid spending is forecast to increase 3.9 percent in fiscal year 2013, which begins July 1 for most states, based on governors’ budget proposals.  That’s down from 20.4 percent the previous year, as states no longer received extra money they had gotten from the federal government because of  the 2009 stimulus law.

But, the Medicaid spending growth rate is expected to outpace the growth of overall general fund expenditures, and, during the past 10 years, Medicaid growth has exceeded the increases in all other categories of state spending, according to NGA and NASBO.

That means states still are looking for ways to cut costs, after years of provider rate reductions, benefit cuts, and other cost containment measures.   The report said states will continue to take actions such as reducing or freezing rates, but they also are looking at longer-term strategies such as expanding managed care or efforts to prevent fraud and waste.