A coalition of business interests and private citizens, including some prominent Republicans, unveiled a plan on Wednesday to accept federal dollars to extend publicly funded health care coverage to nearly a million Floridians — without calling it “Medicaid expansion,” as envisioned under the Affordable Care Act.

The plan, called A Healthy Florida Works, offers an alternative to the ACA model while proposing a politically viable path for Florida’s Republican-controlled House of Representatives, an obstinate opponent of the health law, to extend coverage to more residents. 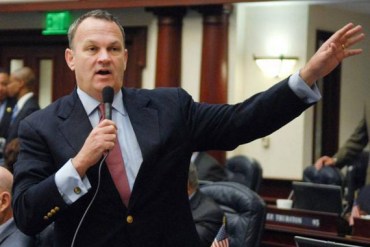 Proponents have presented the plan as a “free market” solution that promotes “personal accountability” among beneficiaries by requiring them to pay monthly premiums and to search for employment or enroll in job training programs.

“Trying Medicaid expansion as envisioned in the Affordable Care Act hasn’t worked in Tallahassee,” said Linda Quick, a coalition member and president of the South Florida Hospital and Healthcare Association. “So this proposal is a Florida solution.”

It was unclear Wednesday how the proposal would be received by Republicans in the state legislature.

State Rep. Richard Corcoran, who in 2013 proposed an alternative to Medicaid expansion that did not use federal dollars, said he would be willing to consider the coalition’s plan.

“It sounds like they are headed in the right direction,” said Corcoran, a Land O’ Lakes Republican who was recently tapped to lead the House Budget Committee.

The proposal also had the support of powerful Senate Rules Chairman David Simmons, R-Altamonte Springs — a close ally of Senate President Andy Gardiner, R-Orlando. The upper chamber has been supportive of expanding Medicaid.

Under the ACA, states were supposed to expand Medicaid eligibility to nearly all low-income adults with incomes at or below 138 percent of the Federal Poverty Level (about $16,000 per year for an individual, and $32,900 for a family of four in 2014).

However, the Supreme Court’s ruling on the ACA in summer 2012 made Medicaid expansion a state option.

So far, 27 states and the District of Columbia have expanded Medicaid eligibility, according to the Kaiser Family Foundation, a nonprofit that focuses on healthcare issues and public health policy. And this week, Wyoming Gov. Matt Mead, a Republican, announced that he would back a plan for Medicaid expansion in his state, though the plan still requires approval from the state legislature.

There is no deadline for states to participate in Medicaid expansion. But the federal government’s offer to cover 100 percent of the cost for those newly eligible begins to phase down after 2016 to 90 percent by 2020. If Florida were to expand Medicaid eligibility, the state would receive an estimated $5 billion a year in additional federal funding.

The Florida plan unveiled Wednesday would cover an estimated 800,000 to one million residents who do not earn enough to qualify for federal financial aid to buy a private plan on the ACA exchange, but who earn too much to qualify for Medicaid — placing them in the “coverage gap.’’

Florida’s income limit for parents is approximately 35 percent of the poverty level, which means a single parent with one child can earn only an income of $453 per month or less ($5,436 annually) to be eligible for Medicaid, and a single disabled adult can make only $721 a month or less ($8,652 annually). Non-disabled adults without minor children are currently ineligible for Medicaid in Florida, regardless of how poor they might be.

Among the states that have expanded Medicaid eligibility, most have done so as envisioned under the ACA. Only four states — Arkansas, Iowa, Michigan and Pennsylvania — have received a federal waiver to try a different model.

In approving waivers for those states, though, the federal Centers for Medicare and Medicaid Services, or CMS, rejected provisions that would have required beneficiaries to work as a condition of eligibility and that would have charged monthly premiums for individuals with incomes below the poverty level.

The plan for Florida calls for mandatory premium payments by all individuals, including those below the poverty level. However, the premiums would be used for individual savings accounts to be spent by beneficiaries for healthcare or education costs.

The “free market’’ elements of the proposal include a provision for the state to establish and operate a private exchange where insurance companies can offer health plans and receive a fixed monthly premium per beneficiary. Nearly all of Florida’s estimated 3.5 million Medicaid beneficiaries transitioned this year to managed care plans operated by private insurance companies and funded by state and federal dollars.

According to the published proposal introduced Wednesday, Florida’s cost for implementing the program would be an estimated $1.4 billion from 2015 through 2020. But savings over the same time period would be nearly $3.2 billion — for a net state savings of $1.76 billion.

Medicaid Expansion By Any Other Name May Fly For Florida Lawmakers