Twenty-four states and the District of Columbia said yes to Medicaid expansion when the law went into effect. Since then, just six more have signed on. States that do get billions of additional federal dollars, but many Republican lawmakers are loathe to say yes to the Obama administration. 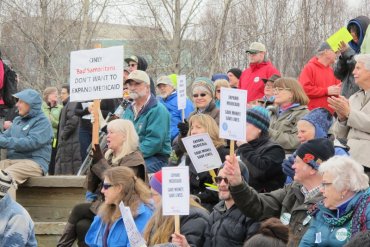 The fight’s garnered many headlines in Florida recently as the Republican-led House and Senate are at odds on expansion and the legislative work—including setting a budget—came to a standstill. But the issue has also been hot out west this year where four Republican majority states took up Medicaid expansion. Wyoming said no, Utah’s governor is seeking to negotiate a compromise with Washington to offer legislators, and Alaska legislators are still wrestling with the issue. And after some legislative fireworks, Montana said yes.

Montana lawmakers have been stewing over Medicaid expansion since they said no to it in 2013 – the last time they met. When they reconvened in January, Americans for Prosperity, a conservative group supported by the billionaire brothers Charles and David Koch, staffed up in the state and targeted moderate Republicans, organizing anti-expansion “town hall” meetings in their districts.

But AFP didn’t invite targeted lawmakers themselves and that backfired. Many voters called AFP’s tactics meddling by outsiders, and some AFP meetings were disrupted.

Tea Party lawmakers in the Montana House fought hard against Medicaid expansion. They killed a proposal by Democrats, and then nearly derailed a Republican-sponsored compromise. The House had to bend its rules to even bring the bill to the floor for a vote. But in the end, 20 Republicans felt politically safe enough to cross party lines and vote with all the Democrats to pass it.

Still, at the bill’s signing ceremony Republican Senator Ed Buttrey, who sponsored the bill, said, “This not Medicaid expansion.”

“I’ll say it again, and I hope the media will report this exciting and unique story,” he said.  “This is not Medicaid expansion.”

Montana’s proposal is now on its way to federal officials, who will have the last word on whether it’s legitimate under the Affordable Care Act.

In Alaska, Governor Bill Walker, a former Republican who is independent, has made Medicaid expansion one of his top priorities.

But Republicans leading the state House and Senate blocked expansion during the legislative session that just wrapped up.

One of those opposed is Senator Pete Kelly.

“I think everyone agrees that Medicaid is broken,” he says.  “To put more money into it, to bring more people into it, that’s certainly not going to help its brokenness.”

But surveys show 65 percent of Alaskans favor Medicaid expansion. Supporters testified in large numbers at legislative committee hearings and attended rallies. In one, organized by an interfaith church group, Lutheran pastor Julia Seymour turned the crowd into a choir. She led them in singing, “Medicaid expansion, I’m going to let it shine” to the tune of “This Little Light Of Mine.”

Seymour’s determined to make sure all Alaskans have access to health insurance.

“The Bible tells us that faith, hope and love go on and do not end. And I’m keeping the faith and I am hopeful, but my love for some of the leaders is waning now and then,” she says.

The state is currently facing a massive budget deficit because of the plunge in oil prices. And Walker says even in better financial times, Alaska doesn’t usually decline more than a billion federal dollars.

“If that was a road project or if that was some infrastructure project, we would be all over that,” he says.  “This is healthcare.”

Walker has proposed expanding on his own if lawmakers don’t act but it’s not clear he has this authority. About 40,000 people would qualify for Medicaid if the state expands. About 30 percent of this group are Alaska Natives.

This story is part of a partnership with NPR, Montana Public Radio, Alaska Public Media and Kaiser Health News.

Medicaid Expansion Is Still A Tumultuous Fight In Several States