Montana appears poised to become the 29th state, plus the District of Columbia, to expand Medicaid under the Affordable Care Act.

A Republican-sponsored bill to do so survived a crucial vote Thursday and is now expected to move quickly to the Democratic governor’s desk for his signature.

Hard-line conservatives made multiple attempts to amend or kill the bill when it hit the Republican-controlled House floor Thursday, but a coalition of 13 Republicans and all 41 Democrats agreed to end debate swiftly and vote. The bill picked up two more Republican supporters in the House than it had on Wednesday. 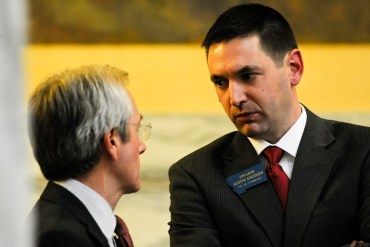 The bill previously passed the state Senate with seven Republican votes. It faces one more vote Friday, but opponents now appear outnumbered. Gov. Steve Bullock is expected to sign it.

If that happens, Montana’s Medicaid expansion plan will still need approval from the federal Department of Health and Human Services. Its provisions requiring recipients to pay premiums and participate in “workforce development” programs will require federal waivers.

Medicaid Expansion One Step Closer To Reality In Montana