Kenneth Berry can feel the bullets in his body move. One jiggles down his leg toward his ankle; another presses on his sciatic nerve; a third has migrated to his hip.

The three bullets have been inside Berry, 41, for more than two decades, pumped into him when he was a teenager near St. Louis.

Now, after years without health coverage, besieged by untreated nerve pain and hunched over a cane, he finally has the golden ticket to get the medical procedures that will bring relief: a Medicaid card.

This is a surprising effect of the Affordable Care Act, the landmark health care law that now faces an uncertain future given the Republican Party’s victory in the presidential election and its control of both houses of Congress.

By funding the expansion of state Medicaid programs beyond the traditional populations of poor mothers and children, the law has brought coverage to tens of thousands of previously uninsured shooting victims, often young African-American men, who, once stabilized in emergency rooms, missed out on crucial follow-up care and have endured unremitting effects of nerve injuries, fractured bones, intestinal damage and post-traumatic stress disorder.

The same states that have opted to expand Medicaid suffer high numbers of firearm injuries, including California, Arizona, Illinois, Michigan, Maryland and Pennsylvania. The law is profoundly changing how gunshot victims in these states heal from grievous injuries by guaranteeing access to specialists, physical therapy, nursing home care, antibiotics, wound supplies and wheelchairs, according to dozens of interviews with trauma surgeons, rehabilitation specialists, anti-violence groups and shooting victims.

“Some of my patients would be missing their skulls three months after the injury and have to wear helmets,” said Dr. Michael Ajluni, a traumatic brain injury specialist at the Rehabilitation Institute of Michigan in Detroit. “Now they can get their skulls back in place.”

Officials at urban hospitals across the country estimated that before the health law, more than half of their gunshot patients were uninsured. Obligated under federal law, hospitals provided hundreds of millions of dollars in unreimbursed services. Trauma surgeons called in favors for scarce charity openings with specialists, but more often grudgingly sent uninsured patients home, knowing they were unlikely to receive essential follow-up care.

Patients needing bowel diversion surgery, for example, a common necessity for those shot in the abdomen that should be surgically reversed after the intestines heal, instead walked around for months or even years with temporary colostomy bags because many hospitals would not treat them without health insurance.

“I felt deeply ashamed of that,” said Dr. Marie Crandall, a former trauma surgeon at Northwestern Memorial Hospital in Chicago, remembering shooting victims whose colostomies she was unauthorized to reverse. 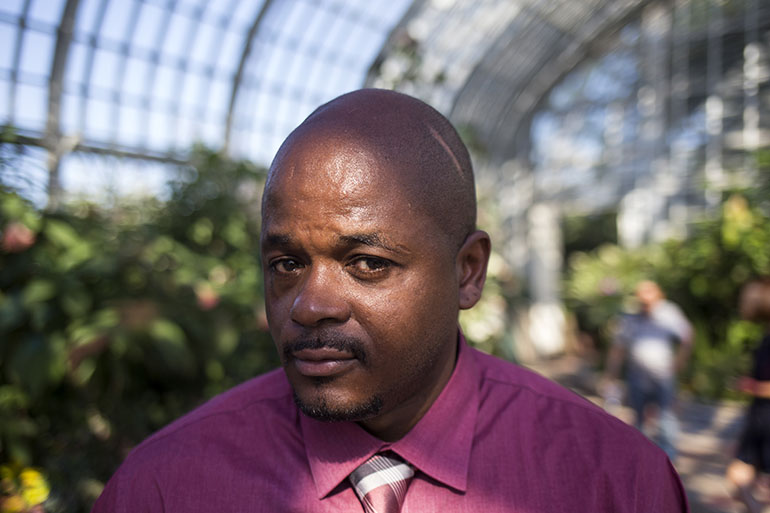 Jerold Exson, 41, suffered 10 gunshot wounds in a case of mistaken identity two years ago. Without Medicaid, he said, “I would probably be messed up for life.” (Alex Wroblewski for The New York Times and KHN)

The first bullet that flew through Jerold Exson’s car window pierced him just below his right eye, ricocheted off his jaw and lodged in his throat. Six more bullets shattered his left forearm as he sought to shield his head. Another two went into his chest, and the last gashed his scalp.

The gunman who fired at him on July 13, 2014, had the wrong man. Exson, out on an errand in his west side of Chicago neighborhood and anxious to start a construction job with full benefits the next day, was rushed to John H. Stroger Jr. Hospital.

Seven months earlier, in January 2014, the Affordable Care Act began allowing states to enroll most adults with annual incomes below $16,000 into Medicaid. So far, 31 states and the District of Columbia have chosen to do so, and over 14 million people are newly covered by Medicaid — more than all Americans who gained coverage under the health law’s insurance exchanges.

For Exson, the benefits were immediate. Medicaid paid the $100,000 bill for his two-week hospital stay and gave him access to specialists that even safety net hospitals like Stroger have long struggled to provide.

Exson’s arduous recovery has involved ongoing care from an ear, nose and throat doctor, an orthopedist, a neurologist, a dentist, a urologist and a psychiatrist and psychologist. Occupational therapists have helped him relearn how to tie his shoes, button his shirt and hold a pen.

“You start getting treated like anybody else when you need care, like a regular citizen,” said Exson, now 41 and recently employed as a limo driver.

He has had seven surgeries, with perhaps more to come; doctors are considering replacing a tendon to quiet the severe pain in his arm.

Medical professionals around the country said exhaustive and continuous medical care like this was the exception before the Medicaid expansion.

“One of my nurses used to shop for medical equipment at garage sales,” said Mary Sajdak, the senior director for integrated care at Cook County Health and Hospitals System in Chicago. 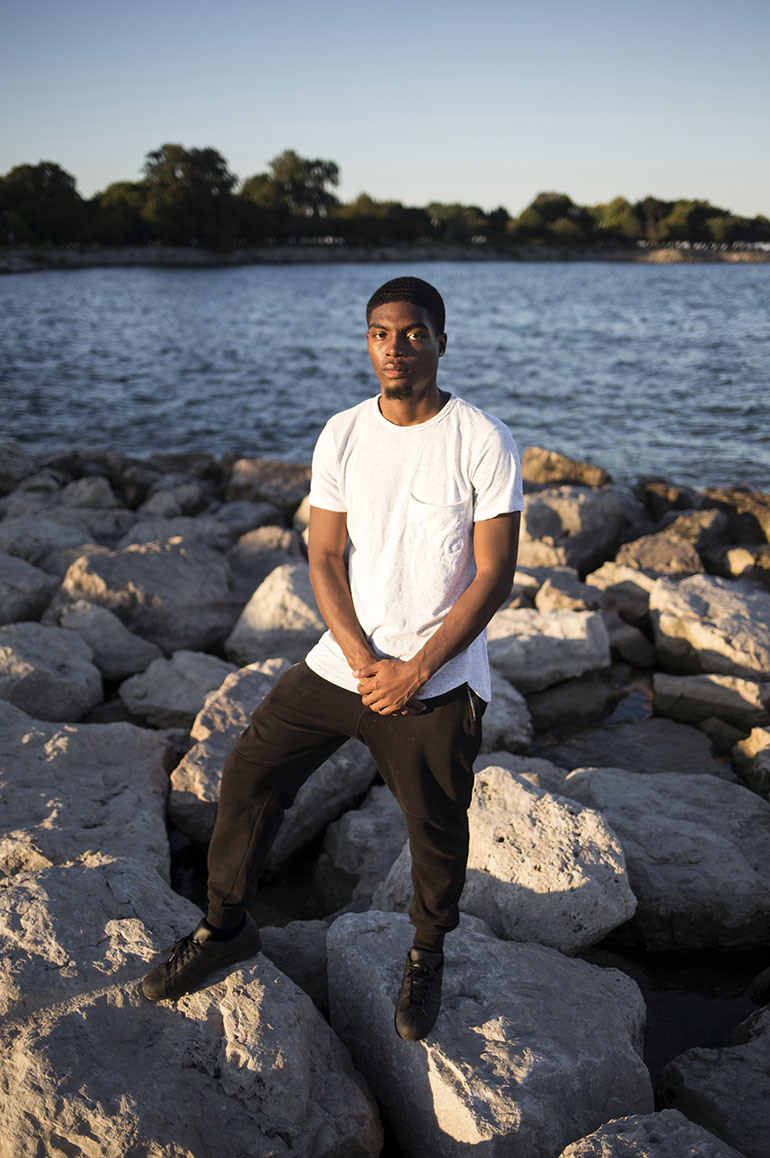 Even with an acceptance letter from Medicaid, but before he received his card, Martise Gray, 21, found that doctors refused to schedule appointments for him after he was shot in July. (Alex Wroblewski for The New York Times and KHN)

In a tidy row of chairs outside his psychologist’s office, Exson cradled his left arm, the bones held together by rods and screws. Without insurance, he said, “I would probably be messed up for life” from injuries “that didn’t get fixed.”

Paper Towel Taped On A Wound

Since the Medicaid expansion began, hospital trauma department revenue has skyrocketed, said Dr. Adil Haider, director of the Center for Surgery and Public Health at Brigham and Women’s Hospital in Boston. The financial boon has made administrators more willing to manage the post-acute needs of new Medicaid patients.

Researchers at the Urban Institute found that before the Medicaid expansion, uninsured shooting victims were admitted for inpatient care less often than insured victims and received less intensive treatment when they were admitted.

Still, even in states that have embraced the Medicaid expansion, some doctors have been slow to shed old protocols designed to keep people out.

Four weeks after a bullet knocked his teeth akimbo, split his tongue and burst through his neck, Martise Gray, 21, sat at a Starbucks in South Chicago in a black tank top that read “Born in the 90s.” He learned that he was eligible for Medicaid only after he was discharged from Advocate Christ Medical Center in Oak Lawn, Ill., he said, when his case manager from CeaseFire, an anti-violence group, urged him to enroll.

Weeks passed before he received an acceptance letter from CountyCare, the Chicago Medicaid plan, and even with the letter, receptionists at an orthodontist and an ear, nose and throat doctor have refused to schedule him until he has a Medicaid card.

Without the card, a pharmacist told him, the prescription-grade gauze needed for his bullet wound would cost $49. Pointing to a paper towel taped to his neck that covered a drainage tube, Gray said proudly, “That’s my own little creation.”

Impatient to heal up so he could start a truck delivery job with Frito-Lay, Mr. Gray said he changed the paper towels when they became saturated.

“I can’t feel nothing on the left side of my face,” he said, touching his cheek. But, he added, “at the end of the day, I keep telling myself I’m alive.”

The burden of gun violence falls heavily on young African-American men, a group that has historically been shut out from public insurance and remains deeply skeptical of a health system embedded with economic and racial bias.

“These are young men who have very bad experiences with systems,” said Anne Marks, the executive director of Youth Alive, a violence prevention group in Oakland, Calif.

“A person gets shot, and now they have insurance,” said Samuel Santana, a hospital responder with CeaseFire, the anti-violence group in Chicago. “It relieves the stress, but it’s not accepted everywhere. They get discouraged.”

The opaque rules of managed care plans can bewilder and frustrate new Medicaid patients. And as the number of new enrollees has surged, states have struggled to provide — and enforce — adequate access to specialists who complain they are woefully underpaid by Medicaid.

Legal aid groups in several states have raised concerns that trauma patients are facing unreasonably long waits for appointments, especially for mental health care. Referrals are often far away, and low-income patients who rely on public transportation to reach their appointments seemingly have no recourse.

“People say, ‘It’s taken me months to get these services,’ and I’ll say, ‘It should take three weeks,’” said Elizabeth Landsberg, the director of policy advocacy at the Western Center on Law and Poverty, a legal aid group based in Sacramento.

Despite the growing pains associated with the expansion of Medicaid, the improvements in care and quality of life for men like Kenneth Berry are evident.

In a sleekly decorated waiting room at a clinic in Beverly Hills, Calif., Berry shifted in a white leather chair, his long estrangement from the health care system finally over. Now enrolled in L.A. Care, a Medicaid managed care plan in Los Angeles, Berry sought an orthopedic surgeon to relieve the pain he had long felt with every step.

To his disappointment, the surgeon recommended against removing the bullet in his right hip and the one in his shattered shinbone for fear of causing more nerve damage. Instead, the doctor recommended cortisone shots from the pain specialist in Beverly Hills.

He’d since had two shots and waited nervously in the doctor’s office for his third. “My posture is better, and I’m walking a little faster,” Berry said. “I had been bent over and felt like an 80-year-old man.”

His Medicaid card has replaced uncertainty with security. Without it, he said, “I would still be waiting.”

Medicaid Is Balm And Benefit For Victims Of Gun Violence