They cited serious problems with the state’s five-county pilot managed care program and urged close monitoring of the companies that run private Medicaid plans to ensure that they don’t scrimp on care.

Advocates and experts say that the need for oversight is growing nationally as states have increasingly contracted out the huge state-federal program for the poor to insurance companies, aiming to control costs and improve quality through close management of patient care. About 30 million people are in these plans now. Under the federal health law that launches Jan. 1, eligibility will be expanded and about 7 million more will be covered by Medicaid. Many will be placed in managed care. 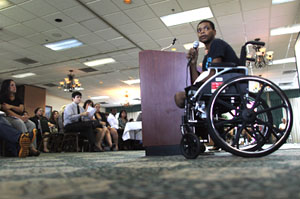 States are required by the federal government to establish quality standards for Medicaid plans and monitor their compliance, but there’s no uniformity. This has resulted in a patchwork of contract requirements and data collection that experts say makes it difficult to compare states and assess whether patients’ health has actually improved.

“The quality of the monitoring and the quality of the managed care really varies from state to state,” said Joan Alker, a co-executive director of the Center on Children and Families at Georgetown University who studies health policy. “This is important because we want to have accountability for our taxpayer dollars. These are very vulnerable populations and sometimes not getting the services they need is a matter of huge import.”

Advocates are particularly worried that more than 20 states are moving frail elderly, mentally ill and people with disabilities into managed care for long-term services.  They have especially complex needs.

Some states have also cut back staffing of their Medicaid offices, raising concerns about their ability to hold plans accountable. The federal government, in turn, has been criticized for failing to fulfill its duty: ensuring that states do what’s needed to oversee the plans.

Thirty-six states and the District of Columbia have enrolled some or all of their Medicaid population in private health plans. The states give the plans a fixed amount per member each month. Last year, the states and federal government paid managed care plans about $108 billion out of the $435 billion spent on Medicaid.

States are supposed to set rates, monitor contracts and enrollment practices, make sure that plans have sufficient networks of doctors, oversee quality and performance and ensure consumer protections for members. But how they each go about doing it is up to them.

For example, federal rules don’t say how many doctors a plan must contract with or how often state officials need to review the adequacy of the plan’s network of doctors.

Seventeen states require Medicaid health plans to be accredited by a national organization, which sets specific quality standards. Other states use some of those standards, but don’t require accreditation. Each state chooses its own approach.

States also must arrange for an external group to independently monitor the plans’ quality of care every year. But the federal requirement doesn’t specify how that monitoring should be done either.

“If you want to collect data about screening people for obesity, Minnesota may collect it, but Louisiana may not,” said Sarah Somers, a managing attorney for the National Health Law Program, a nonprofit legal services group for low-income people. “If you want to do a systematic comparison across the states, it’s not really doable.”

A July 2012 Urban Institute study of Medicaid managed care in 20 states found “tremendous variation” in the kind of quality monitoring conducted by states and health plans and in how they ensure the plans’ networks of doctors are adequate. The maximum number of patients per doctor, for example, varied from 750 in Michigan to 2,500 in Tennessee. In rural areas, primary care doctors had to be located within 10 miles of patients in California, but within 45 miles in Ohio.

Embry Howell, a senior fellow who co-authored the study, said that while states don’t necessarily need to use all of the same quality measurements, there should be a way to compare them state-to-state and plan-to-plan. “Otherwise the data is going to be apples and oranges,” Howell said. “This is important. It’s the accountability side of it.”

Even the health plans themselves are frustrated with the hodgepodge of state quality measures. “It adds an additional level of complexity for plans that operate in a dozen or more states,” said Joe Moser, executive director of Medicaid Health Plans of America, an industry trade group. “We do support more federal standardization.”

Matt Salo, executive director of the National Association of Medicaid Directors, said states may oversee quality and access differently, but that he’s “not aware of anyone doing it badly.”

Salo pointed out that in traditional Medicaid, with states focused on paying doctors and hospitals for each service they provide, there is little monitoring and oversight, other than for financial fraud and abuse.

“The irony about quality is that consumer advocates say we’re not sure there’s a proper focus on quality. But where are the quality measures for fee-for-service Medicaid?” he said.

Some state Medicaid offices have taken a hit in recent years because of budget cuts – Washington state’s program lost more than 200 positions since 2009. And oversight isn’t always a priority, says Carolyn Ingram, a former New Mexico Medicaid director who is senior vice president of the Center for Health Care Strategies, a nonprofit health policy center.

Florida’s experience with managed care underscores the importance of close monitoring. After the state launched a pilot program in 2006, doctors were unhappy about delayed payments and administrative obstacles, patients complained about being denied access to services and data on the quality of care was lacking. Several insurers dropped out because they couldn’t make enough money.

State officials say those problems have been fixed. In 2011, the federal government approved an extension of the pilot and in June agreed to allow Florida to expand it statewide.

But Georgetown University’s Health Policy Institute has been critical of Florida’s pilot program.  “Little data is available to assess whether access to care has improved or worsened,” it reported in 2011, noting there is no “clear evidence” the program is saving money and if it is, “whether the savings came at the expense of needed care.”

Advocates say access problems remain and Florida’s oversight is inadequate. “The state is supposed to be overseeing all of this. They haven’t done a good job of that,” said Laura Goodhue, executive director of Florida CHAIN, a statewide health care advocacy group.

Experts caution that even in states that devote lots of resources to oversight, many of the quality standards they use are aimed at figuring out whether services were provided, not the effect on patients’ health – what they call “outcome.”

“Even if there’s an intent to aggressively monitor, you have to figure out whether and how they’re doing it. And measuring quality is really, really tough,” said Michael Sparer, a Columbia University professor of health policy. “We can say immunization rates have gone up or waiting times are down…But measuring whether outcomes have changed substantively is very elusive and difficult to get at.”

In a few states, legislators have tried to beef up oversight.

In Kansas, which in January moved nearly all of its 380,000 Medicaid members into plans run by three commercial plans, the legislature decided to do its own oversight. It unanimously passed a bill in March that would establish a joint legislative committee to monitor the state’s Medicaid managed care program. The governor signed it in April.

“We need to make sure they’re adhering to contractual arrangements, that they’re providing the services they committed to provide, that our Medicaid clients have access to services and are actually getting them,” said Kansas State Sen. Laura Kelly, a Topeka Democrat.

In Kansas and several other states, consumer advocates worry that officials are rushing too quickly to move vulnerable elderly, mentally ill and physically disabled people into Medicaid managed care for long-term services, such as home health and personal care. They say states don’t have systems in place to properly monitor quality of care or the plans’ performance. A 2012 study by Truven Health Analytics estimated that the number of states with these programs will grow from 16 to 26 by 2014.

In the District of Columbia, more than 150,000 people are enrolled in Medicaid managed care, including mentally ill adults. A federally-mandated group that makes recommendations about Medicaid policy in Washington created a subcommittee to track the impact of managed care on mental health. Its report, issued last year, concluded that the program was poorly administered, with minimal oversight and insufficient data available.

“I think we were shocked to find out how little oversight that there was,” said subcommittee chairman Shannon Hall, executive director of the D.C. Behavioral Health Association. “They had great contracts with the plans, but as far as we could tell, none of them were being actively monitored or enforced.”

Advocates across the country say they’re worried that a number of companies vying for state contracts have little or no experience dealing with people who need long-term care, and they fear that plans might try to restrict access to save money because many new members will require expensive services.

Moser, of the industry trade group, dismisses those concerns, saying that the plans support rigorous oversight and want to make sure members get the care they need. He said several companies have a decade or more experience with long-term services and other plans will learn from them.

While states are responsible for keeping an eye on Medicaid managed care plans, the federal Centers for Medicare & Medicaid Services is required to monitor how well the states are doing that. But CMS, too, has had its problems with oversight, according to reports by the Department of Health and Human Services Inspector General’s office and the U.S. Government Accountability Office.

The following year, the GAO criticized CMS for lax oversight and inconsistency in tracking how states set managed care plans’ rates. The auditors wrote that this was essential because it could “help avoid significant overpayments and reduce incentives to underserve or deny enrollees’ access to needed care.”

And earlier this year, the GAO reiterated those concerns, saying that CMS needed to “continue taking steps to improve oversight” of Medicaid managed care rate-setting.

“We saw unevenness in both how the rates are set and in the federal oversight of the state’s oversight,” she said. “The requirements are there,” she said, “but they’re not evenly enforced in (CMS’) regional offices.”

CMS would not make an official available to comment for this story, instead issuing a statement saying it is committed to working with states to give them flexibility in administering their programs.