In Florida, a national managed care company’s former top executives were convicted in a scheme to rip off Medicaid. In Illinois, a state official concluded two Medicaid plans were providing “abysmal” care. In Ohio, a nonprofit paid millions to settle civil fraud allegations that it failed to screen special needs children and faked data.

Despite these problems, state health agencies in these – and other states – continued to contract with the plans to provide services to patients on Medicaid, the federal-state program for the poor and disabled.
Health care experts say that’s because states are reluctant to drop Medicaid plans out of fear of leaving patients in a bind.

“You probably won’t find many examples of states flat out pulling the plug. That’s sort of the nuclear option,” said James Verdier, a senior fellow at Mathematica Policy Research, a nonpartisan think tank. “There are all sorts of sanctions you can impose – financial penalties, limitations on enrolling new beneficiaries. States will almost always use those sanctions to work with a plan and try and get them up to speed, to the extent they can.”

States are increasingly turning to insurance companies to provide coverage for people on Medicaid in hopes of saving money and improving care. About 30 million Americans on Medicaid now belong to a managed care plan, and beginning in January, millions more will become eligible under the federal health law. Many will be placed in managed care. 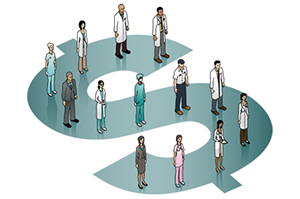 Thirty-six states and the District of Columbia have enrolled some or all of their Medicaid population in private health plans, many of them owned by major insurers that operate in multiple states.

State health officials are responsible not only for monitoring and oversight, but for enforcing contracts and cracking down on plans that violate the rules or perform poorly.

Each state decides how to do that, and it varies substantially. Some fine plans or reduce payments for failing to meet quality standards. Others offer more of a carrot than a stick – they pay bonuses or financial incentives for excellent performance. Some use both financial penalties and incentives.

Advocates say that states need to do a better job of policing problem plans and not wait until a contract is up for renewal to pull the plug.

“You have a situation where too many states take a hands-off approach. I think there’s a significant risk of substantial harm to consumers,” said Alice Dembner, project director for Community Catalyst, a national health care consumer advocacy group.

Dembner’s group is surveying states to find out if – and how – they sanction managed care plans, focusing on companies that operate in multiple states.

“So far, we found that only a small number of states impose fines and many of them are for paperwork violations – the plans didn’t file this form or that form on time,” Dembner said, noting that just a handful of states have levied sizeable penalties.

One of them is Texas, where officials have suspended enrollment and imposed hefty fines on some plans – in one case for more than $2.8 million. They also revoked one of their plan’s contracts – a rare move for a state.

Linda Edwards Gockel, spokeswoman for the Texas Health and Human Services Commission, said that in 2009, officials were concerned about a pilot program in the Dallas-Fort Worth area run by Evercare, a subsidiary of UnitedHealth Group. The program, which coordinated care and long-term services for elderly and disabled people, had been fined more than $600,000 for not providing proper access to care and failing to coordinate services.

Gockel said Texas decided to cancel the contract 15 months early, but continued to do business with Evercare because the problems in Dallas-Fort Worth weren’t affecting services it was providing elsewhere.

“We have contracts with them in a variety of programs and they are currently a good partner with the state,” she said.

UnitedHealth spokeswoman Alice Ferreira said that although there had been “some challenges in the past, we really believe today we enjoy a very positive relationship” with Texas.

States don’t want to dump plans because that could cause major disruption for patients, who might have to switch doctors and prescription drug plans, said Matt Salo, executive director of the National Association of Medicaid Directors.

“Are the other plans capable of dealing with that influx? Maybe they are and maybe they’re not,” he added. “Maybe they’d have to revamp their networks [of doctors and hospitals] and payment structure. That might not be something they can do at the drop of a hat.”

Reluctance To Get Into The Business

In Illinois, Medicaid Deputy Administrator Jim Parker said his office was unable to cut ties with Harmony Health Plan, a subsidiary of WellCare Health Plans, and Family Health Network, a nonprofit community plan, even though they had serious quality problems over a decade.

“Their performance was abysmal,” Parker said, noting that their quality rankings were in the low percentiles.

Parker said one reason the state kept awarding them contracts was that they agreed to participate in a program in several counties in which members enrolled voluntarily and weren’t required to join. Most companies weren’t interested in that business because there wasn’t a guaranteed number of patients.

The other reason was more complex.

“Managed care can be a big political issue at the state level,” Parker said. “You had a divide in Illinois. Republicans in the legislature were pushing the state to go to more managed care. In light of that, it was not politically feasible to get rid of the existing plans. They were around for political reasons.”

The two plans have made some improvements, Parker said, and in 2014, when Illinois begins moving large numbers of Medicaid patients to mandatory managed care, “we will not keep plans that are not doing well.”

WellCare spokesman Jack Maurer wrote in an email that over the past several years, the company has “worked hard to improve its quality scores and has made significant investments to this end.”

Family Health Network CEO Keith Kudla said that the company has “always been the leader” among plans in its Chicago-area market when it comes to quality scores.

“We recognize, however, in comparison to national benchmarks that we can do better,” Kudla wrote in an email. He said his company embarked in 2010 on a multimillion dollar strategy to expand access, improve care coordination and upgrade information systems.

Another nonprofit Medicaid plan got into trouble with government officials, but the issue wasn’t about quality.

CareSource, a Dayton, Ohio-based nonprofit Medicaid plan, agreed in 2011 to pay the federal government and the state $26 million to settle civil fraud allegations that it failed to provide screenings and other services for adults and special needs children and submitted false data to the state. The company denied the allegations, but said it settled to bring the matter to a close.

CareSource spokeswoman Jenny Michael said the company had no comment.

Ohio Medicaid spokesman Sam Rossi wrote in an email that the settlement “did not include any actual finding of wrongdoing, and there was never an allegation of consumer harm.” He said CareSource has taken steps in recent years “to better document the services it provides.”

Not Walking The Walk

Another plan that faced fraud allegations was Amerigroup Corp. of Virginia Beach, a national managed care company that currently operates in 12 states. It agreed in 2008 to pay $225 million to the federal government and Illinois to settle a civil case that alleged it had defrauded the state’s Medicaid program because it avoided enrolling pregnant women and unhealthy patients and submitted thousands of false claims to the government. The company did not admit any wrongdoing.

Amerigroup, which was purchased by WellPoint in late 2012, had already left Illinois when its contract expired two years before the settlement. The other states did not rescind their contracts.

Health care fraud experts said they couldn’t think of a single case in recent years in which a plan had been dropped because it was the subject of a Medicaid fraud probe.

“If you’re going to talk the talk about enforcement, you better be prepared to walk the walk,” said Bill Mahon, former executive director of the National Health Care Anti-Fraud Association. “There’s a lot of talk, but a lot less walk by the states.”

Florida health officials continued to contract with WellCare after FBI agents raided the national managed care company’s Tampa headquarters in 2007. That eventually led to criminal charges, and earlier this year, several former WellCare top executives were convicted in a scheme to defraud Florida’s Medicaid and Healthy Kids programs by falsely inflating the amount it spent on care.

In 2009, WellCare signed a “deferred prosecution agreement” with the U.S. Attorney’s Office, agreeing to pay $80 million to resolve potential criminal charges in the fraud case. Last year, the company finalized a $137 million settlement to resolve civil fraud allegations.  It did not admit wrongdoing in the civil case.

In February, Florida officials allowed the company to expand its Medicaid services to all 67 counties. Today, WellCare, which has 1.8 million Medicaid members in eight states, is the largest Medicaid managed care plan in Florida.

WellCare spokesman Maurer said in a statement that it is “a transformed company.” He said a new leadership team appointed in 2008 “has set an exemplary ‘tone at the top’ by emphasizing integrity, personal accountability, ethical business practices, regularly compliance and transparency.”

Maurer said WellCare cooperated fully with state and federal authorities in their investigation and resolved all the issues that directly involved the company.

Florida Medicaid Director Justin Senior said the state consulted with federal health officials and decided not to drop WellCare’s contract mostly out of concern that it would have caused chaos for patients.

Senior said the WellCare situation was “the closest our state has come to terminating” a plan’s contract and noted that no other state canceled its contract with WellCare because of the fraud case. He said the company’s new leadership has made a difference.

“There’s no reason not to continue to do business with them,” Senior said. “They were making up for the past wrongs of the past management team. A leopard can change its spots.”