Skip to content
This story is part of a reporting partnership that includes KUOW,

Medicaid – and how to expand the program – has become an issue in the competitive governor’s race in Washington State.

In June, the U.S. Supreme Court ruled that the Affordable Care Act went too far by requiring states to expand Medicaid or else lose all federal funding for the program that covers the poor and disabled.

The ruling left it up to states to decide whether or not to open up the program to cover more low-income people without insurance.  In Washington State, Chris Gregoire, the current Democratic governor, chose to continue with plans for expansion.  But Gregoire is not seeking reelection, and whoever is elected governor this fall could change that course. 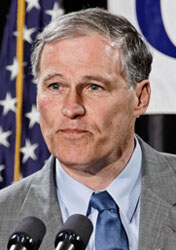 The issue is playing out in an extremely tight race pitting Democrat Jay Inslee, an eight-term congressman from Seattle, against Republican Rob McKenna, the attorney general.

Inslee voted for the health law in Congress and he would follow Gregoire’s lead, expanding Medicaid as mandated by the Affordable Care Act. McKenna says he’s for expansion, but with restrictions. For example, he’d like to require current as well as new Medicaid beneficiaries to share costs.

“We’re only one of the few states where there’s not even a $5 co-pay… what we’re saying is that everyone has to have some financial skin in the game, even just a little bit,” McKenna said.

Currently more than 1.2 million Washington residents get health coverage through Medicaid.  Enrollment to the program has gone up since 2008. The state restricts Medicaid to low income children and their parents, people with disabilities, and the elderly.

After expansion, the program will open up to include adults without children.  And eligibility will be based on income. For a single person, that threshold is just under $15,000 in annual income.  For a family of four, it’s $30,657. 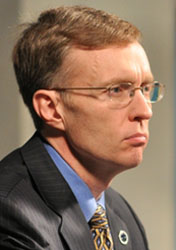 McKenna’s position is not a standard issue Republican stance. He doesn’t support the reform plan put forward by the Republican presidential ticket of Mitt Romney and Paul Ryan.  As Washington Attorney General, McKenna joined the lawsuit that challenged the Affordable Care Act, but only the part of the lawsuit that opposed the mandate that most individuals must buy insurance.

The Supreme Court rejected that argument, but  McKenna says the Medicaid portion of the ruling gives states some leverage to negotiate with the feds on how to run the program.

Early projections found that about 500,000 Washington residents would qualify under the expanded program, and roughly half of them would enroll.

McKenna wants Medicaid to be maintained as a safety net.  But he fears that many employers will stop providing health insurance for their lower wage employees and those people will end up on Medicaid. He wants more flexibility from the federal government to keep that from happening.

Inslee says the expansion will help people without insurance, but there are fiscal benefits for the state as a whole, too, because right now everyone bears the cost for those who don’t have health coverage.

Inslee says those charges are billed to insurance carriers, and the carriers pass on those costs to consumers.  He also argues that expanding Medicaid is one way to make sure that federal taxes paid by Washington residents are used to help Washington.

If Washington continues with Medicaid expansion, the federal government will pick up 100 percent of the tab for the first three years.  Over time, the federal match tapers to 90 percent by 2020.

This story is part of a reporting partnership that includes KUOW, NPR and Kaiser Health News.