The Affordable Care Act is on the move in Western states, with the governors of Utah, Wyoming and Montana all working to hammer out deals with the Obama administration to expand Medicaid in ways tailored to each state.

But getting the federal stamp of approval is just the first hurdle — the governors also have to sell it to their legislatures who have their own ideas of how expansion should go.

The latest case-in-point is Montana, where the governor and the legislature have competing proposals about how much federal Medicaid expansion cash the state should try to pull down. 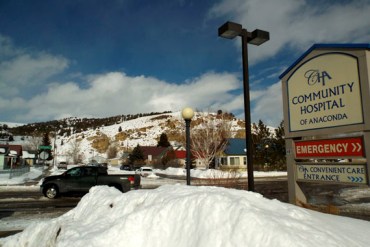 Montana’s hospital association is backing Governor Steve Bullock’s Medicaid expansion plan. Most are small, ” critical access hospitals” (25 beds or fewer) like this one in the town of Anaconda. (Photo by Eric Whitney/Montana Public Radio)

Montana’s GOP-dominated legislature, which meets every other year, rejected Democratic Governor Steve Bullock’s attempts in 2013 to expand Medicaid and set up a state-based insurance exchange. This year Bullock has a different Medicaid expansion proposal aiming to reduce the Treasure State’s 17 percent uninsured rate. It would use federal dollars to contract with a third party administrator to process claims and run a provider network. So far Republican leaders are not embracing it any more than they did his 2013 plan.

Nine Republican state lawmakers last week released an alternative proposal, the “Healthy Montana Family Plan.”  It rejects the approach by Bullock and the White House that Medicaid should be offered to anyone making less than 138 percent of the federal poverty level (FPL), or $16,105 a year. That would be about 70,000 people in this sparsely populated state with just over 1 million residents.

Instead, the plan would extend Medicaid only to certain categories of people who make less than 100 percent of the federal poverty line, or $11,670. The idea is to “keep it targeted toward what it’s intended to do,” said plan co-author Sen. Fred Thomas, “take care of our most vulnerable citizens … disabled persons, low income seniors, low income parents, children.”

“Able-bodied people should be able to go out and get a job,” incoming Republican House Speaker Austin Knudsen told the Billings Gazette.

Thomas, an insurance agent by trade, says that extending Medicaid to non-disabled adults who don’t have children is “a disincentive to work.”

How should an uninsured adult without kids who makes less than $11,670 get coverage? Thomas says the focus should be on boosting that person’s  income: “Anyone that’s in that predicament, we’re gonna encourage them to get another job, get the extra hours, and qualify for the exchange, by bumping their income up a little bit.”

He points out that, under the Affordable Care Act, low income people who make at least 100 percent of FPL qualify for premium subsides through healthcare.gov, which makes health coverage “pretty economical,” or nearly free.

The plan he co-authored says: “Policymakers could employ income tax credits in certain circumstances to boost incomes of those without Medicaid access above 100 percent FPL in order to take advantage of sliding-scale exchange subsidies.” 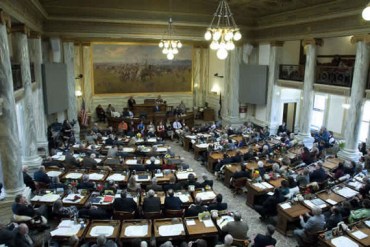 That reliance on subsidies could hit a snag if the Supreme Court decides in June that it is illegal for those tax subsidies to flow to states that are using healthcare.gov rather than setting up their own exchanges.

The Montana Republican health plan also echoes policies advocated by former Obama administration Medicaid and Medicare leader Don Berwick. It calls for new contracts with providers that require them to take on some risk and responsibility for the health of the population. The contracts would reward hospitals and doctors based on “metrics that focus on health outcomes, patient satisfaction and cost containment,” what Berwick calls the “triple aim.” The health law enacted many of those rewards and penalties for hospitals that treat Medicare patients.