Stan and XuXia Smith learned from an ultrasound midway through the pregnancy that their son would be born with an often-fatal congenital heart defect. In the first week of the baby’s life, they got more bad news: Some major organs were incorrectly formed and mislocated inside Travis’s tiny body. They faced a long journey.

“I felt like I’d been hit by a tidal wave. I couldn’t process the information I was being given fast enough, and I knew we’d need someone to help us translate and evaluate the enormous amount of information we were being bombarded with,” Stan Smith said.

The Chicago couple hired Dan Polk, a patient advocate and retired neonatologist whose specialty is working with sick babies and their families. Polk helped the Smiths understand the complexity of their son’s condition while building an experienced health care delivery team, and he has guided them through the intricacies of Travis’s treatment. More than two years after his birth, he still has medical issues that require Polk’s counsel.

There are perhaps 250 to 300 patient advocates for hire in the United States, one professional association estimates. Some advocates such as Polk have clinical backgrounds and know how to navigate the health care system. They may accompany patients to appointments and facilitate doctor-patient conversations in patient-friendly language. They may also handle tasks such as prepping for medical appointments, finding the right doctors and even deciphering medical bills and health insurance plans.

Advocates aren’t cheap — their rates can start at $100 an hour or more, depending on experience and credentials — and insurance doesn’t cover them. 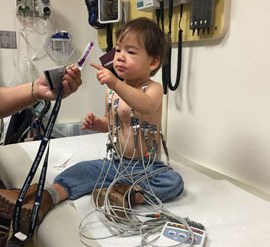 Travis Smith, who was born with a serious heart defect, sits on an examination table at Boston Children’s Hospital in December. (Courtesy of Stan and XuXia Smith)

Smith, 69, runs an economic and financial consulting firm. His wife, XuXia, 41, takes care of Travis and their 5-year-old daughter, Blake Sarai TeiTei Smith. They have the resources to pay for a top-notch advocate. Polk’s standard hourly fee is $300, but his rates depend on the client and the situation. When he travels for out-of-town consultations and treatments, as he sometimes does with the Smiths, his daily rate is $1,500 plus expenses.

Smith said advocates can sometimes help a client avoid unnecessary expenses that they might incur by going it alone.

“Without Dan, the doctors in Boston and Chicago never would have imagined that we’d be able to understand the level of complex information we asked for,” he said. “But with Dan, we could not only travel at their speed and understand what was going on, we could collaborate in coming up with better solutions and pathways for care.”

Physicians sometimes say complicated things, Polk said. Just because their words are heard doesn’t mean they are understood. In the Smiths’ case, he noted, 15-minute conversations with doctors often led to three-hour discussions with Polk to talk over what they meant.

Preparations for repairing Travis’s heart were among the most technically and emotionally challenging. The first step was to help the Smiths understand what was wrong and the solutions that might keep Travis alive. Then the parents had to decide who should perform the procedure and where. And for the surgery at Boston Children’s Hospital, Polk accompanied the parents to explain the operation as it unfolded.

“A good advocate must have the ability to evaluate complex medical situations, formulate a plan to address them and implement it,” Polk said.

That’s not all. One lesson Polk learned is that there’s a time to talk and a time to listen.

“Initially, listening is probably more important to understand the entirety of a situation, but at some point, you have to start to act,” he said.

Polk helped the family avoid pitfalls. Once, a doctor recommended that Travis get immediate surgery on an intestinal abnormality.

Polk suggested the Smiths get another opinion. A second doctor suggested they wait and see. A third physician agreed, and so did Polk and the Smiths. An immediate operation could have led to scar tissue that might have caused an intestinal blockage. “We can’t say what would have been the result of a trip or fall, but we do know that many families who we met on the same journey have lost their children,” Smith said.

Physicians see value in patient advocates, too. Dr. Pedro del Nido, who operated on Travis’s heart at Boston Children’s Hospital, praised Polk for applying his medical knowledge and communication skills to present information clearly in a way that allowed for rational, thoughtful decisions.

Most doctors welcome advocates, said Dr. Sima Kahn, a patient advocate and an obstetrician and gynecologist in Seattle. “Doctors are so overworked that they … seem thrilled to discover that people who do what I do exist and that I am part of a team that can take pressure off them.”

When Keith Cotton was diagnosed with Stage 2 brain cancer two years ago, he and his wife hired Kahn. She helped them find the best specialists, discover options and ask the questions that they didn’t know to ask themselves.

After Cotton had a tumor removed, he wasn’t sure he wanted chemotherapy and radiation, but Kahn helped him to see the benefits. “I realize now that not having the treatment would have been a bad idea,” said Cotton, 39, whose wife, Megan, gave birth to their first child, Grace, in June.

Finding advocates such as Polk and Kahn isn’t always easy. Teri Dreher, the founder of North Shore Patient Advocates in Chicago, recommends weighing an advocate’s educational and practical experience. Someone with complicated health issues might benefit from an advocate with a medical or nursing background. And advocates who lack clinical backgrounds may have personal experiences that make them excellent choices.

The Smiths celebrated Travis’s improving health and the new year in Disney World. Stan Smith says his son’s neurologist has told them that Travis should be back on track in his mental and physical development next year.