For Travis Hill, it was an offer too good to refuse. Last year when the 30-year-old neuroscientist was admitted to a new program at the NYU School of Medicine that would allow him to complete medical school in only three years and guarantee him a spot in its neurosurgery residency, he seized it. Not only would Hill save about $70,000 — the cost of tuition and living expenses for the fourth year of medical school — he would also shave a year off the training that will consume the next decade of his life.

“I’m not interested in being in school forever,” said Hill, who earned a PhD from the University of California at Davis last June and started med school in Manhattan a few weeks later. “Just knowing where you’re going to be for residency is huge.”

So is Hill’s student loan debt: about $200,000, dating back to his undergraduate days at the University of Massachusetts. 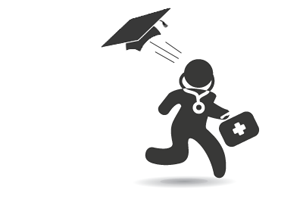 And he won’t begin practicing until he is 40.

The chance to finish medical school early is attracting increased attention from students burdened with six-figure education loans: The median debt for medical school graduates in 2013 was $175,000, according to the Association of American Medical Colleges. This year, the combined cost of tuition and fees for a first-year medical student ranges from just over $12,000 to more than $82,000.

Some medical school administrators and policymakers see three-year programs as a way to produce physicians, particularly primary-care doctors, faster as the new health-care law funnels millions of previously uninsured patients into the medical system. Enormous student loans are cited as one reason some newly minted doctors choose lucrative specialties such as radiology or dermatology, which pay twice as much as pediatrics or family medicine.

But debt and the shortage of primary-care doctors are not the only factors fueling interest in accelerated programs.

Some influential experts are raising questions about the length of medical school in part because much of the fourth year is devoted to electives and applying for a residency, a process that typically takes months. (Similar questions are being raised about the third year of law school.)

In a piece published in the Journal of the American Medical Association in 2012, University of Pennsylvania Vice Provost Ezekiel Emanuel and Stanford economist Victor Fuchs proposed that a year of medical school could be eliminated “without adversely affecting academic performance.” The overall time it takes to train physicians, they wrote, is an example of waste in medical education and could be shortened without affecting patient care or eroding clinical skills; students could be assessed on “core competencies rather than on time served.”

A 2010 report by the Carnegie Foundation recommended that fast-tracking be considered.

So far, fewer than a dozen of the nation’s 141 medical schools are offering or actively considering three-year programs, which typically involve the elimination of electives, attendance at summer classes and the provisional guarantee of a residency — offered because three-year graduates might be at a disadvantage compared with other applicants.

NYU launched its program in September with Hill and 15 other students chosen from a pool of 50 applicants — nearly a third of the medical school’s 160-member class.

In September, Columbia University’s College of Physicians and Surgeons launched a “fast track MD” for candidates who already hold doctorates in biology; there were 40 applicants for four slots.

Despite the growing popularity of such programs, critics question the wisdom of jettisoning the fourth year of medical school, which they say plays a crucial role in preparing doctors for residency and subsequent practice.

Some note that the three-year track was offered by a few dozen medical schools in the late 1970s but subsequently abandoned, largely because of student burnout from trying to cram too much into three years.

Supporters of the three-year option say that contemporary medical school programs are different from 1970s curricula, which relied more heavily on rote memorization, and that the new programs have been designed to minimize burnout.

“This has been tried before, and it was a miserable failure,” said Stanley Goldfarb, associate dean for curriculum at the University of Pennsylvania’s Perelman School of Medicine, who co-authored an essay opposing three-year programs in a recent New England Journal of Medicine.

“Since the 1970s things have gotten so much more complex in medicine,” he said. The more relaxed fourth year, he said, gives students the chance to pick the field that best suits them and to carefully evaluate residencies. More than three-fourths of students, he said, enter medical school uncertain about their eventual specialty. Goldfarb said he favors enhancing the fourth year, not eliminating it.

Medical students have mixed feelings about three-year programs, said Nida Degesys, president of the Reston-based American Medical Student Association. While many are eager to reduce their debt, they are also concerned about missing opportunities; fourth-year electives can include ophthalmology, critical care and emergency medicine.

“I personally changed my mind” during med school, Degesys said. “In the first year I thought I was going to do OB-GYN, but I later found that emergency medicine is truly the right fit for me.”

For more than a century, medical schools have largely designed their programs around a template: two years of preclinical or classroom work in basic medical science, followed by two years of clinical rotations, mostly in hospitals.

After med school, students continue their training in residencies lasting from three to seven years, which increasingly is followed by a fellowship of one year or more.

“There have always been some individuals who wondered about the length of medical school,” said John Prescott, former dean of the medical school at West Virginia University and chief academic officer at the Association of American Medical Colleges.

To speed the production of doctors, medical training during World War II was shortened to three years with no ill effect, he said.

Prescott calls the current three-year programs “well-designed experiments” that may provide models about how to prepare students “in the most cost-effective way.” But he doubts they will supplant the conventional four-year track for most students.

Steven B. Abramson, vice dean of NYU’s medical school, agrees, but he said he expects three-year programs to multiply over the next five years.

NYU’s accelerated program, he said, is best suited for highly qualified students who are typically older, more mature and certain of their choice of specialty. Because three-year students take the same core courses as their classmates, they will be equally well prepared, he said. And Abramson noted the proliferation of dual-degree programs: students who earn an MD along with a graduate degree in science, business administration or public health.

“The core content we deliver is rigorous, comprehensive and very well monitored,” he said. To stay in the three-year program, students must remain in the upper half of the class; they retain the option of switching to the four-year track if they find it too taxing. First-year students are also assigned mentors in their intended residency.

While students at NYU can designate a variety of specialties, the three-year Family Medicine Accelerated Track at Texas Tech is limited to those who intend to pursue that specialty.

“There weren’t enough primary-care doctors before the Affordable Care Act,” said Texas Tech medical school dean Steven Berk, who trained as a family physician. “There are lots of towns in Texas with 25,000 people and no doctor. And it’s the primary-care physicians who find the small breast mass or control patients’ blood pressure. They are essential to the functioning of the health-care system.”

Many students who chose the three-year course have committed to primary care based on their previous work experience. “We have students who have been PAs, EMTs and RNs,” he said, referring to physician assistants, emergency medical technicians and registered nurses.

Texas Tech students are awarded a $15,000 full tuition scholarship to cover the first year. When they graduate, their average debt for tuition and living expenses totals about $60,000, Berk said. Like the NYU program, students have the option of switching to the four-year track — none has so far — and are granted a residency spot when they enter med school.

Fears that they will not perform as well as their four-year counterparts have not been validated, Berk said. Scores on licensing exams are equivalent, and burnout has not been a problem.

The promise of a residency in family medicine, a specialty that “fits with my values and goals,” was enticing, as was the lower price tag.

“A lot of people have to apply to 30 or more residency programs,” said Willnauer, now a first-year resident. “That’s a very large cost and a lot of time.”

It was also a bonus in other ways. Married and the father of two toddlers born while he was in medical school, Willnauer, age 30, said, “I bought a house and knew I wouldn’t have to uproot my family.”

This story was changed Jan. 17 to update the number of medical schools in the United States.

Some Medical Schools Shaving Off A Year Of Training