Messiah United Methodist Church in Springfield, Va., is unusually busy for a Thursday morning. It’s not a typical time for worship, but parishioner Stacy Riggs and her husband have come for something a little different: a medical screening.

“I’m getting ready to turn 50 sooner than I’d like to say, and just thought it was a good time to get an overall screening,” said Riggs, of Fairfax, Va. She doesn’t have any symptoms, but she stopped by the church, which is offering a day of testing by the company Life Line Screening as a service to parishioners. 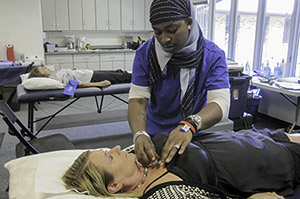 For less than $200, Riggs is getting six different screenings for stroke, heart disease and osteoporosis. Life Line says they’ve checked 8 million Americans this way at churches and community centers, and up to 10 percent of them are found to have some sort of abnormality.

But several of the tests performed by Life Line are on a list of procedures for healthy people to avoid.

The tests can potentially do more harm than good, according to the U.S. Preventive Services Task Force, an independent panel that recommends evidence-based treatments. Even though the screening tests may be noninvasive, follow-up exams and procedures often are not, and can increase a person’s odds of being injured or over treated.

One of those tests is the carotid artery screening, which screens for plaque buildup in a neck artery than can cause a stroke. The test is on the American Academy of Family Physicians’ list of procedures to avoid.

“What we’re talking about with the carotid artery screening is that the patient is more likely actually to have a stroke because of the screening and subsequent testing and possible surgery, then if they’d never been screened at all,” says Dr. Glen Stream, who chairs the academy’s board.

The problem, he says, is that many of the findings are false positives, or are better left alone. But once you find something, he says, it’s hard not to aggressively treat it, even when that’s not the right approach.

“There’s sort of a compelling momentum for patient and doctor both to say, well now that we know there’s a problem we need to investigate and understand it, and then there’s the dilemma about do we treat it,” Stream explains. “So many times watchful waiting is the right treatment option, but it just doesn’t always sit well.”

But Dr. Andy Manganaro, medical director of Life Line Screenings, says the company’s tests save many lives. Manganaro, who has been a vascular surgeon for 30 years, says he was often called to see a patient in the emergency room who had an already-ruptured abdominal aortic aneurysm, for example, that could have been discovered earlier with one of Life Line Screening’s tests.

“Had they known they had the aneurysm a week before, we could have fixed it with very little risk to them, and they would have been going home instead of to the morgue,” he says.

And while most of the research and advisory panels are nearly unanimous that several of the tests offered by Life Line and other companies like it are more likely to cause harm than good for people without symptoms, Manganaro counters that the research is out of date.

Even people who aren’t at major risk benefit, he says, because the tests push them to change their lifestyles before more damage is done.

“Yes, you can tell people in general, lose weight, stop smoking, exercise, lead a healthy lifestyle. But most often it goes in one ear and out the other,” Manganero says. “On the other hand though, if you show someone a picture of their carotid artery filled with plaque as compared to a normal carotid artery, they’re much more likely to throw out their Lucky Strikes on the way out the door.”

But it’s not just about quitting smoking or taking other steps to improve your health. It’s also about money.

Life Line Screening is a for-profit company, and it often partners with local hospitals and surgical centers, which help advertise the event. And if Life Line finds a problem, the patients can be referred to the hospital for follow-up care, meaning new business for the hospital. Cardiac care can be especially lucrative for hospitals.

“When information comes in the form of an advertisement or promotion, regardless of the source, be skeptical. Realize that from a health point of view, if this was a really good and important thing to do you probably wouldn’t need to be advertising and promoting it,” Santa says.

And most importantly, he adds, talk to your family doctor before doing any kind of screening to make sure you’re getting the tests that are right for you.

Prevention For Profit: Questions Raised About Some Health Screenings