This story also ran on Miami Herald. This story can be republished for free (details).

STUART, Fla. — Dr. Christopher Rao jumped out of his office chair. He’d just learned an elderly patient at high risk of falling was resisting his advice to go to an inpatient rehabilitation facility following a hip fracture.

He strode into the exam room where Priscilla Finamore was crying about having to leave her home and husband, Freddy.

“Look, I would feel the same way if I was you and did not want to go to a nursing home, to a strange place,” Rao told her in September, holding her hand. “But the reality is, if you slip at home even a little, it could end up in a bad, bad way.”

After a few minutes of coaxing, Finamore, 89, relented and agreed to go into rehab.

Keeping patients healthy and out of the hospital is a goal for any physician. For Rao, a family doctor in this retiree-rich city 100 miles north of Miami, it’s also a wise financial strategy.

Rao works for WellMed, a physician-management company whose doctors treat more than 350,000 Medicare patients at primary care clinics in Florida and Texas. Instead of being reimbursed for each patient visit, WellMed gets a fixed monthly payment from private Medicare Advantage plans to cover virtually all of their members’ health needs, including drugs and physician, hospital, mental health and rehabilitation services.

If they can stay under budget, the physician companies profit. If not, they lose money. 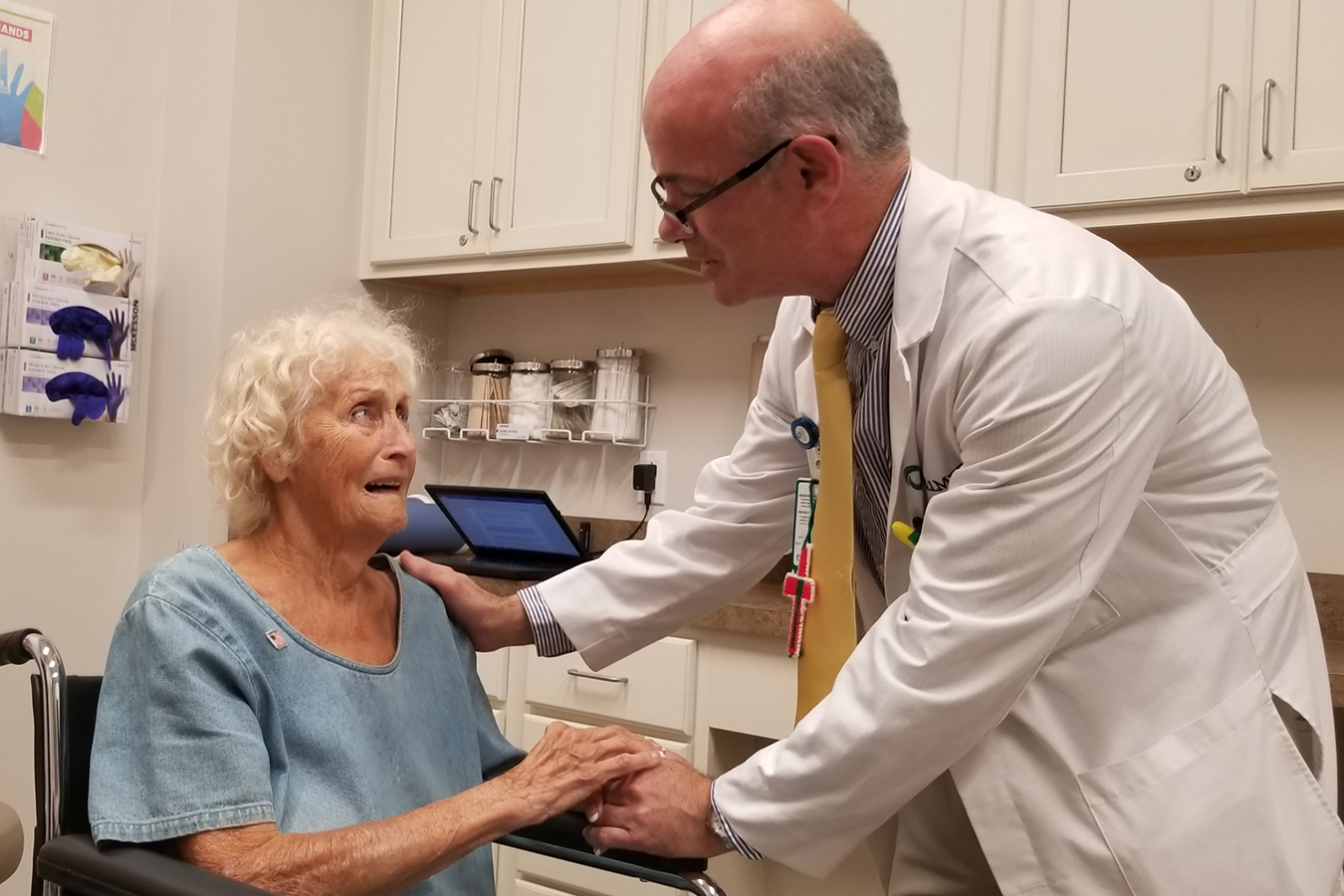 This model — known as “full-risk” or “global risk” — is increasingly used by Medicare plans such as Humana and UnitedHealthcare to shift their financial exposure from costly patients to WellMed and other physician-management companies. It gives the doctors’ groups more money upfront and control over patient care.

As a result, they go to extraordinary lengths to keep their members healthy and avoid expensive hospital stays.

ChenMed doctors encourage their Medicare patients to visit their clinic every month — for no charge and with free door-to-door transportation — to stay on top of preventive care and better manage chronic conditions. If patients are not feeling well after-hours, ChenMed even will send a paramedic to their home.

“We can be much more creative in how we meet patient needs,” said Iora CEO Rushika Fernandopulle. “By taking risk, we never have to ask … ‘Do we get paid for this or not?’”

A Way To ‘Provide Less Care’

Some patient advocates, pointing to similar experiments that failed in the 1990s, fear “global risk” could lead doctors to skimp on care — particularly for expensive services such as CT tests and surgical procedures.

“At the end of the day, this is a way to keep costs down and provide less care,” said Judith Stein, executive director of the Center for Medicare Advocacy.

Dr. Brant Mittler, a Texas cardiologist and trial attorney who has followed the issue, said Medicare Advantage members should be suspicious.

“Patients don’t know that decisions made on their behalf are often financially based. There may be pressure on doctors to cut corners to save money and that may not be in the best interests of a patient’s health,” he said.

The insurers and physician groups disagree. They said limiting necessary care would only exacerbate a patient’s health problems and cost the doctors’ group more money.

Noting that Medicare members stay with Humana an average of eight years, Roy Beveridge, the insurer’s chief medical officer, said the plan would be unwise to skimp on care because that would eventually leave the company with sicker patients and longer hospitalizations.

“It makes even less sense for physicians at financial risk to skimp on care because patients are typically with their physicians much longer than they are with a health plan,” he said.

A study that examined care at ChenMed, published last month in the American Journal of Managed Care, found health costs were 28 percent lower among patients who had more than double the number of typical visits with their primary physician. The study was conducted by researchers at ChenMed and the University of Miami.

To offer more personal care, ChenMed doctors typically see only about a dozen patients per day — about half as many as is usual for a doctor who gets paid for each individual service.

Medicare beneficiaries, who can choose a private health plan during the open-enrollment period that runs from Oct. 15 to Dec. 7, generally have no idea if their health plan has ceded control of their care to these large doctors’ groups.

After choosing a Medicare Advantage plan, they generally sign up for a medical group that is part of their health plan’s network, often because doctors are close to where they live or because the doctors offer extra benefits such as free transportation to appointments.

Eloy Gonzalez, 71, of Miami, said that before switching to ChenMed a couple of years ago his doctors always seemed to be in a hurry when he saw them. He’s happy with his ChenMed physicians.

On a recent visit, he spent nearly 20 minutes with Dr. Juana Sofia Recabarren-Velarde talking about keeping his blood pressure and lung condition under control. She also showed him exercises to manage back and shoulder pain.

“If she thinks she needs to see me once a month to monitor my blood pressure and see if anything else is happening, it’s OK with me,” said Gonzalez, who pays nothing for the office visits or generic drugs under his Humana Medicare Advantage plan with ChenMed.

Nearly one-third of the 57 million Medicare beneficiaries are covered by private Medicare Advantage plans — an alternative to government-run Medicare — and federal officials have estimated that the proportion will rise to 41 percent over the next decade. The government pays these plans to provide medical services to their members.

The “global risk” system has been used in South Florida and Southern California since the late 1990s and nearly half of Medicare Advantage members in those regions get care in the model. The use has spread further in the past two years as large physician companies have become more common, and about 10 percent of Medicare Advantage plan members across the nation are in them now, health consultants say.

In addition, new information technology allows these groups to better track their patients. With mixed results, Medicare Advantage insurers for years offered doctors bonuses to meet certain quality care standards, such as getting members vaccinated against the flu or controlling diabetes and other chronic diseases.

Under the “global risk” arrangements, the health plans give the physician companies the bulk of their Medicare funding when they take on the mantle of being financially responsible for all patient care.

For the doctors’ groups, the arrangement means they get paid a large amount of money upfront for patient care and don’t have to worry about billing or having to get insurers to always preapprove treatments.

Because the “global risk” arrangements are designed to reduce plans’ costs, they potentially allow the companies to lower premiums and attract more customers, said Mark Fendrick, director of the University of Michigan’s Center for Value-Based Insurance Design.

“I see this trend continuing to grow as clinicians will be accountable for the first time for the care they provide,” he said.

But Ana Gupte, a securities analyst with Leerink Partners in New York, noted providers can also lose money if not successful.

That’s what happened in the late 1990s when some physician-management companies such as FPA Medical Management and PhyMatrix took on financial risk from insurers only to later go bankrupt, interrupting care to thousands of patients.

Health insurers say they now trust only doctors’ groups that have shown they can handle the financial risk. They also retain varying levels of control. Insurers set benefits, handle member complaints and review which doctors are allowed in its network.

Martin Graf, a partner with consulting firm Oliver Wyman, said the old financial arrangements failed because provider groups did not manage the risks facing their patients.

“Now they know physician groups must be vigilant about their patients — whether they are in the office or not,” he said. “Everyone is aware of the failure of the past.”