San Francisco – Bruce Osterweil is a lucky man to live just a short walk from where San Francisco’s Golden Gate meets the cold, rough waters of the Pacific Ocean. He is also a lucky man to have married his wife, Patricia Furlong, who has long provided the family’s health insurance through her job at a small financial consulting firm.

But last month, Osterweil’s wife turned 65 and decided to retire, and although she may walk away with a crystal bowl or a golden watch for all those years of service, she will also walk away from her company’s generous health insurance benefits. That means Osterweil, who is 59 and a self-employed benefits consultant, is shopping for his own health insurance. 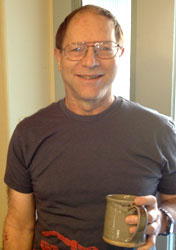 Bruce Osterweil long relied on his wife’s employer-sponsored health plan for coverage, but she recently turned 65 and signed up for Medicare (Photo by Sarah Varney/KHN).

“I’m really surprised at how hard it could be for just the average person who isn’t an actuary or benefits consultant to figure any of this out. It’s astonishing,” he says.

When a spouse or parent signs up for Medicare, it is often perplexing – and unnerving – for the rest of the family who may have grown used to cushy employer-sponsored coverage. For example, young adults up to age 26, who were covered under their parent’s insurance, are no longer covered when their parent moves to Medicare.

“Medicare doesn’t cover dependents,” according to Joe Baker, president of the Medicare Rights Center, a patient education group with a busy hotline for those with Medicare questions. “However, if you’re a dependent of someone who is losing coverage because they’re retiring and going into Medicare, you can continue your coverage for 3 years under COBRA.”

COBRA is a federal law that allows someone to pay full price to stay on their employer’s group plan. They can also shop around for an individual plan. For healthy young adults, Baker says families should look to see if they can find less expensive coverage.

But buying an individual plan can be daunting for older adults in their late 50s or early 60s who are more likely to have some health problems. They are at the mercy of the private insurance market. “We do frequently get calls from folks,” says Baker, “who cannot find insurance policies in the state in which they live either because they have pre-existing conditions or the policy is so expensive they really can’t afford it.”

The younger spouses of Medicare beneficiaries who have been denied coverage – and have been uninsured for six months – can apply for coverage through their state’s so-called high risk pool. Baker notes that there should be better options for older adults starting in 2014, when a key provision of the federal health law will prohibit insurance companies from denying adults coverage because of a pre-existing condition.

Another confounding question is what to do when someone turns 65 and decides to keep working. Should they keep their insurance or sign up for Medicare coverage?

The answer hinges on just how big of a company you work for. “The [federal] rules are quite clear,” says Baker. “If you’re working at an employer with more than 20 employees and you have coverage through that employer or through a spouse working at company with more than 20 employees, you can continue to keep that coverage. That means you don’t really need to enroll in Medicare.”

Baker says many people will still be covered by Part A of Medicare – which covers inpatient hospital care – because there is no premium, and it may pay some of the costs not covered by your group health plan. But most choose not to enroll in Part B – which covers doctor’s visits – because it costs about $100 dollars a month and is often largely redundant.

It is a different story if you work at a small company with fewer than 20 employees. In that case, Baker says, the federal rule is: You need to enroll in Medicare.

“Employers think they’re doing people a favor, saying, ‘Oh don’t worry, you can stay on our plan. Don’t worry about Medicare.’ If they’re under 20 full time employees, they risk the insurance company finding out you’re Medicare eligible and saying, ‘You’re off the plan and by the way everything we paid after you turned 65 and were eligible for Medicare, you need to pay us back.'”

To avoid any foul ups, Baker recommends that as people near their 65th birthday, they should start talking to their human resources department or call Social Security.