Despite a three-year-old order from Congress, Medicare has yet to begin an experiment to expand hospice services to allow beneficiaries to continue potentially lifesaving treatments to see if it would save money while improving the patients’ quality of life.

The demonstration project would eliminate one major reason that people are reluctant to take up Medicare’s hospice benefit: they have to first agree to forgo curative treatments such as chemotherapy. 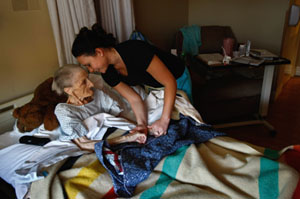 Nurse Rachel Haenel embraces terminally ill patient Jackie Beattie, 83, at the Hospice of Saint John in 2009 in Lakewood, Colorado. A demonstration project would allow those getting hospice care under Medicare to also receive curative care at the same time (Photo by John Moore/Getty Images).

Many rapidly declining patients delay entry into hospice until their final days as they exhaust their treatment options, according to studies.

Others end up dying in hospital intensive care units, which are expensive and generally not geared to making the terminally ill as comfortable as possible.

The 2010 health law required Medicaid to pay for joint hospice and curative treatments, called concurrent care, for children. More than half the states have taken steps to implement that in the joint federal-state program for low-income residents. It also instructed the secretary of Health and Human Services to select up to 15 sites to test concurrent care for patients in Medicare, which provides health coverage to seniors and disabled people. That test is to last for three years, but Medicare has yet to take any concrete steps toward beginning it.

“It is missing an opportunity,” said Dr. Randall Krakauer, an Aetna executive who helped establish that insurer’s concurrent care program for people with private coverage. “Our own experience is when you do liberalize the hospice benefit, it does not cost you extra and it may actually cost you less.”

Krakauer said several years ago, Aetna asked Medicare for permission to expand the program to the 448,000 elderly enrolled in its private Medicare Advantage plans—with Aetna promising to pay for any extra costs — but never got a response. “We are very interested in participating in this,” he said.

Officials at the Center for Medicare & Medicaid Innovation, which is supposed to oversee the project, declined to discuss why the project has not begun or when it would start. “CMS has expressed its commitment to implementing a project that will test new ways of delivering hospice care to Medicare beneficiaries,” the agency said in a written statement. “This demonstration would allow beneficiaries to receive both palliative and curative care at the same time, which could provide better overall care to the patient.”

J. Donald Schumacher, president and CEO of the National Hospice and Palliative Care Association, said that in private conversations officials say they want to move ahead. “We are still very hopeful that they are interested in conducting the study,” he said.

Even with its restrictions, hospice is one of the fastest growing parts of Medicare. In 2011, 1.2 million Medicare beneficiaries used the benefit, double the number a decade before. Medicare spent $13.8 billion on hospice, with an average per patient of $11,342.

Hospice advocates have long argued that palliative care, which focuses on easing pain and not trying to prolong life, is not only more humane but also less expensive. A study, published in March in the journal Health Affairs by a team of researchers led by Dr. Amy Kelley, found that when patients enrolled in hospice three months or longer before they died, Medicare’s expenses were lower than for those who never used the benefit.

The average expense to Medicare of those patients enrolled between 53 and 105 days was $22,083 for those in hospice compared to $24,644 spent on those beneficiaries who did not elect the benefit.

It’s not clear whether allowing Medicare recipients to receive curative and palliative treatments at the same time would save money. Aetna estimated it saved 22 percent on people under 65 who were part of its broad program with hospice and more curative care. But no one has been able to do a rigorous study of how it will play out for Medicare patients. The health law requires Medicare not to spend more money on the patients in the demonstration project than it otherwise would have.

In a report to Congress last year, the Medicare Payment Advisory Commission wrote that “it is uncertain whether this type of approach would yield savings” without closer management of the services that Medicare beneficiaries choose.

Some health policy experts privately fear that delay may have a political component. End-of-life care is an acutely sensitive subject given the hyperbolic accusations of “death panels” that some opponents lobbed at the health law during the debate in 2009 and 2010.

“Is it residual anxiety related to the whole death panel thing, or is it a matter of money? Who knows,” said Dr. David Casarett, a professor at the University of Pennsylvania’s Perelman School of Medicine and director of Penn’s hospice and palliative care program. “The effect is very negative for end-of-life care in the country. The way hospice is designed now may have worked fine 30 years ago, but it doesn’t work now and we need to think about alternatives.”