In the latest effort to enlist seniors in the fight against Medicare fraud, federal officials have overhauled Medicare billing statements to make it easier to find bogus charges without a magnifying glass. 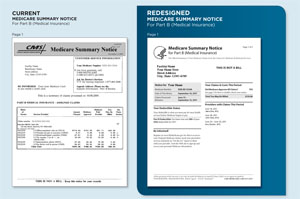 Click the image for a document summarizing changes to Medicare’s billing statements.

The new, more consumer friendly format, which goes online Saturday on Medicare’s secure website, www.mymedicare.gov, includes larger type and explanations of medical services in plain English. The revised paper version, which is mailed to seniors every three months, will be phased in early next year.

“You can make a difference!” the revamped statement says. “Last year Medicare saved taxpayers $4 billion – the largest sum ever reported in a single year thanks to people who reported suspicious activity to Medicare.”

And for those who might need an incentive to scour their bills, the new statements promise a reward of up to $1,000 for a tip that leads to uncovering fraud. Although the bonus isn’t new, there’s no mention of it on current forms, which are sent to about 36 million beneficiaries in traditional Medicare.

“We approached this redesign from the standpoint of making it a more consumer-friendly document for beneficiaries and also a better fraud-fighting tool,” said Erin Pressley, director of creative services for the Centers for Medicare and Medicaid Services. “If they are paying attention to these documents, they are going to be the best defense we have.”

“It shouldn’t be a scavenger hunt,” she added.

Currently, Medicare Summary Notices, as the billing statements are called, can run more than a dozen pages for those with multiple doctor visits and treatments, and they are full of medical jargon and abbreviations that often read like a secret code.

That complexity can mask mistakes or out-and-out fraud that drive up Medicare costs and can jeopardize future services for beneficiaries, said Susan Johnson, project manager for Virginia’s Senior Medicare Patrol, a nationwide program that encourages seniors to ferret out fraud. Johnson said a few seniors have recently alerted her to double billing for laboratory tests in Fairfax County, suspicious home health care charges near Roanoke, and a wheelchair paid for but never received in Arlington.

Tatiana Fassieux, a program manager in Northern California for the state’s Health Insurance Counseling and Advocacy Program, warns seniors that if Medicare pays for something they didn’t receive, such as a power wheelchair or physical therapy, Medicare could deny the claim when they really need it, because the services were already provided and paid for, at least on paper.

Still, when she urges people to review their notices, she hears back the same complaint. “The reaction is that it is just too complicated,” she said.

The redesigned form also aims to make Medicare services clearer and more accessible. “Consumer protection starts with making sure consumers not only get timely and accurate information, but that they understand what services they’re receiving from Medicare,” said Marilyn Tavenner, Medicare’s acting administrator.

Filing an appeal if a claim is denied will also be easier. The new form explains what to do for those who disagree with a payment decision, how to get help filing an appeal, and offers a form that can be filled in and mailed to the address provided. Beneficiaries can also check claims status online and then use the online appeals form, instead of waiting to receive their statement in the mail.

Expediting the process is important because many seniors can’t afford to pay for nursing home care or other expensive medical bills and may go without the care they need, said Leslie Fried, Medicare advocacy director for the Alzheimer’s Association. Even seniors with supplemental insurance may face difficult financial choices since private insurers only pay for benefits after Medicare has paid its share.

Only 2 percent of the 117 million claims denied in 2010 were appealed.

Fassieux hopes the effort will pay off. “It looks more user-friendly,” she said. “But the proof will be in how beneficiaries react and if they will be more diligent in reading it.”

Medicare Combats Fraud With Billing Statements That Beneficiaries Can Understand