Walter Bianco has had hepatitis-C for 40 years, and his time is running out.

“The liver is at the stage next to becoming cirrhotic,” the 65-year-old Arizona contractor says. Cirrhosis is severe scarring, whether from alcoholism or a chronic viral infection. It’s a fateful step closer to liver failure or liver cancer. 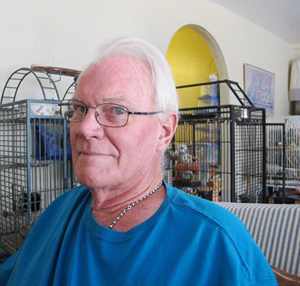 Walter Bianco, 65, at his Arizona home, has had hepatitis-C for more than 40 years. (Photo by Alexandra Olgin/KHN)

If he develops one of these complications, the only possible solution would be a hard-to-get liver transplant. “The alternative,” Bianco says, “is death.”

Previous drug treatments didn’t clear the virus from Bianco’s system. But it’s almost certain that potent new drugs for hep-C could cure him.

However, the private insurer that handles his medication coverage for the federal Medicare program has twice refused to pay for the drugs his doctor has prescribed.

Doctors are seeing more and more patients approaching the end-stage of hep-C infection. “There isn’t a day that goes by when I don’t have a story very similar to Mr. Bianco’s,” says Dr. Hugo Vargas of Mayo Clinic in Scottsdale, AZ, his liver specialist.

Researchers estimate that 3 to 5 million Americans carry the insidious hep-C virus. The biggest concentration is among those born between 1945 and 1965.

Many, like Bianco, got hep-C from injecting street drugs in their youth. He says he’s been drug- and alcohol-free for 32 years, but the infection was permanent.

Other baby boomers got the virus from transfusions before 1992, a period when blood wasn’t screened. Some got it from sharing razors or toothbrushes, or from contaminated tattoo needles or hospital equipment. For some, transmission was sexual, although fortunately this isn’t the highest-risk route.

The timing of these infections spells trouble for Medicare, which insures Americans over 65.

Hepatitis-C is a slow-acting virus. Over a period of 20 to 40 years, it causes liver damage in about 70 percent of people it infects.

A growing number of people who got infected in the 1960s through the 1990s have now “used up” the infection’s latency period, notes Dr. Camilla Graham of Beth Israel Deaconess Hospital in Boston, “which is why we’re now seeing this dramatic increase in the number of people developing complications and dying of hepatitis. And we expect this to continue to increase for the next 10 years.”

Another part of Medicare’s problem is that new hep-C medications are among the priciest of any drugs. One called Sovaldi, federally approved last December, costs $1,000 a pill – or $84,000 for a typical 12-week treatment course. The other recently approved drug, Olysio, costs around $66,000. Others in the pipeline are expected to be similarly expensive.

“People were very shocked about the price because it hit a psychological barrier in terms of  ‘this is too expensive,'” Graham says.

She has a patient like Walter Bianco – a 65-year-old woman whose severe liver damage puts her on the edge of liver failure.

Graham believes her patient’s best chance at cure lies in the use of both Sovaldi and Olysio. “We have about 160 people who were studied in a clinical trial called COSMOS that showed a very high cure rate – 90 to 100 percent – for even the most difficult-to-treat patients with this combination,” she says. 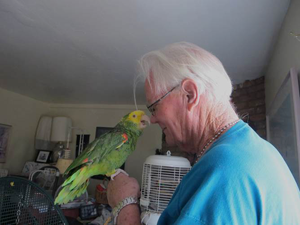 Walter Bianco, 65, playing with one of his tropical birds, has had hepatitis-C for more than 40 years. (Photo by Alexandra Olgin/KHN)

But, as in Bianco’s case, the Medicare’s drug-benefit contractor that covers this patient has refused to approve payment.

The apparent reason is that the Food and Drug Administration has not yet approved use of the two drugs in combination. (On May 7, Olysio’s maker, Janssen Therapeutics, asked the agency for such approval.)

But Graham notes that in the early days of successful antiviral drug treatment for HIV, payers allowed doctors to “mix and match” medications in “off-label” or unapproved combinations as they thought best.

“Medicare has been slower to adopt off-label combinations than most of the other insurance plans,” Graham says.

Medicare officials wouldn’t comment on coverage of new hep-C drugs. A spokesman wrote in an email that the federal program turns such decisions over to private insurers that administer its drug plan, called Medicare Part D.

However, advocates say Medicare officials are well aware of the program’s looming exposure to the enormous costs of treating hep-C. Some say it could run in the tens or hundreds of billions of dollars, though it’s not clear over what period of time.

One thing likely to accelerate demand for treatment: Medicare is expected to approve payment for routine blood tests for hep-C infection soon. That will reveal many people who don’t yet know they’re infected – and spark difficult conversations between patients and doctors on when to use the expensive new medications to clear the virus from their blood.

Many hepatitis specialists and patient advocates are worried that the cost of the drugs will lead payers to limit access to patients who already have advanced liver disease, or even more narrowly, those who are on transplant waiting lists.

“We’re very scared that these programs to limit access to treatment could interfere with our goals of trying to find people with hepatitis C,” Graham says.

Ryan Clary of the National Viral Hepatitis Roundtable, a patient advocacy group, says public health may be on a collision course with treatment and reimbursement policy.

“On the one hand, we’re saying ‘Now is the time to be tested for hep-C. There are these promising treatments,'” Clary says. “But on the other hand, we’re saying ‘You can’t have access to these cures. It’ll bankrupt the country.’ So where’s the incentive to test?”

Apart from expensive drug treatment aimed at cure, doctors say there are other good reasons for identifying infected patients. They can be counseled to stay away from alcohol, which accelerates hep-C related liver damage. They can also be told about steps to take to avoid infecting others.

There are other implications of delaying treatment until liver damage is advanced. Once a patient has developed cirrhosis, he’ll need to be monitored every six months for the rest of his life for signs of liver cancer.

And if a patient tips into liver failure or cancer before getting cured, treatment will cost an estimated $50,000 a year – possibly over several years.

“Hepatitis-C is a ticking time bomb,” Graham says. “We have a very limited amount of time to get in here and alter the course of the disease for a good number of people. And we either do that, and we do it well now, or we face a whole lot more people suffering severe complications of this disease.”

While the cost and treatment implications get sorted out, patients like Walter Bianco are in an agonizing limbo. He says he can’t possibly afford the $150,000 it would cost to buy Sovaldi and Olysio on his own.

“It is a lot of money and there are a lot of hep-C sufferers out there,” he says. “I think Medicare’s probably thinking ‘If we can hold off for a year or two, some of these following drugs will be cheaper.'”

But Hugo Vargas, Bianco’s doctor, says it’s urgent to cure his infection now. “If he were my father,” the Mayo specialist says, “I would want Mr. Bianco to be treated now – not in a year, not in a year-and-a-half.”