As a nationally known expert on federal health policy, Robert Reischauer has for decades had more than a passing interest in Medicare.

But this week his passion for the program — and concern for its future viability — turned more personal. 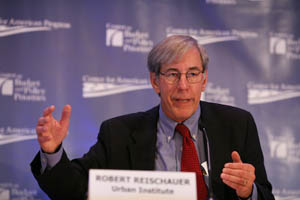 Robert Reischauer (Photo by Center for American Progress via Flickr)

“I applied for Medicare yesterday,” Reischauer said Monday at a media briefing where he and the other trustees of Medicare and Social Security released their annual report on the financial health of the programs. The report showed Medicare’s Part A Trust Fund, which covers hospital costs, would begin to run out of money in 2024 — the same projection as last year. “I have great interest in sustaining Medicare for current and future generations,” he said.

Reischauer, 70, retired from the non-partisan Urban Institute at the end of Februrary. There is no financial penalty for signing up late for Medicare Part B  (physician coverage)  for people who have employer coverage. Most people are enrolled automatically for Medicare Part A when they turn 65. There is no premium for Part A.

Reischauer is one of two public trustees for Social Security and Medicare. The other trustees are members of the Obama administration.

Reischauer was director of the Congressional Budget Office from 1989 to 1995. He also was a researcher at the Brooking Institution and co-chair of the Medicare Payment Advisory Commission.

Reischauer is not the only Washington health policy insider to gain a more personal interest in Medicare. Don Berwick, former head of the Centers for Medicare and Medicaid Services until last December, became eligible when he turned 65 last September. Mitt Romney did not sign up when he turned 65.

Reischauer joined the other trustees in urging Congress to act quickly to extend the solvency of Medicare and Social Security. “Both of these vitally important programs are on unsustainable paths,” he said.