Five years ago, Joseph Hale didn’t care whether he lived or died. He was unemployed, hooked on drugs and deeply depressed.

Help came after Hale swallowed a bottle of pills and landed in South Shore Hospital. There, an outreach worker persuaded him to seek help at a local mental health agency. Within a few months, Hale was living in a men’s residence, going to group therapy every day, and beginning to feel secure for the first time in his life.

That sense of having a safety net strengthened in September when Hale signed up for Medicaid, a new option under the Affordable Care Act. Previously, adults who were poor, single, psychologically troubled and uninsured didn’t qualify for this public health program unless they were deemed permanently disabled. 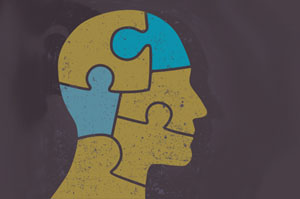 “It was a big sigh of relief for me,” said Hale, 46, who has hypertension and diabetes and had lived without health insurance for many years. “It makes it easier for me to take care of my health.”

Now, as Illinois undertakes a major expansion of Medicaid under the national health care overhaul, as many as 120,000 uninsured low-income residents with depression, anxiety, bipolar disorder, schizophrenia, post-traumatic stress and other psychiatric illnesses will qualify for publicly funded health insurance for the first time, according to the National Association of State Mental Health Program Directors.

An additional 210,000 Illinoisans with mental health problems who had been eligible for Medicaid but hadn’t signed up also could enroll in the program as community organizations, hospitals, medical clinics and public health agencies reach out to people without insurance and try to help them find coverage.

Both developments will take a vulnerable population that has lingered on the margins of the health care system, oftentimes not receiving needed care for physical as well as psychological ailments, and give them the means to get needed services rather than depending on erratic state funding or charity care.

“This is the best thing that has happened to mental health services in my lifetime,” said Mark Heyrman, chair of public policy at Mental Health America of Illinois and an instructor in mental health law at the University of Chicago. “Nothing else even comes close.”

The hope is that care will improve for poor patients who often cycle in and out of hospital emergency rooms, homeless shelters and jails as psychological difficulties roil their lives and underlying illnesses remain untreated. Adults with serious mental illness die 25 years earlier, on average, than other adults, most frequently of often preventable illnesses such as heart disease or diabetes.

Hale experienced some of these problems earlier in life, when he acted out, sometimes violently, racked up a criminal record and tried to drown out his emotional pain through drugs and alcohol. “There were an array of things that were extremely toxic in my life,” he said, “and depression was the fueling factor.”

Rasheem, a 25-year-old South Sider with severe bipolar disorder, has seen a change since enrolling in August in CountyCare, an early version of the Medicaid expansion in Cook County. Before, he sought medical attention at Roseland Community Hospital’s emergency room; now he has a primary care doctor for the first time.

“Used to be, I’d have to wait for hours just to be seen,” said Rasheem, who asked that his full name not be used. “Now it’s like I’ll get seen real fast, and they really take the time to help me out.”

But improved access to needed services is by no means certain. Psychiatrists and other mental health professionals are in short supply in disadvantaged neighborhoods on the South and West sides of Chicago as well as many other parts of the state. And after $113 million in budget cuts between 2009 and 2011, Illinois’ underfunded mental health system has been weakened considerably.

“I am afraid there simply isn’t enough capacity to meet the needs of a significant increase in the (Medicaid) patient population” with mental health issues, said Joel Johnson, president of the Human Resources Development Institute, which offers mental health and substance abuse services on the South Side.

“The fear factor is that communities which will see the largest increase in patients will be those that are already pretty badly underserved,” Johnson said.

Under the Medicaid expansion, which went into effect Jan. 1, publicly funded health insurance is available to all legal residents with incomes at or below 138 percent of the federal poverty level, or $15,856 for an individual. Until now, people with serious mental illnesses, even those considered disabled, didn’t qualify if their earnings topped 100 percent of the federal poverty measure.

Also, poor, single individuals addicted to alcohol or drugs — a problem that often goes hand-in-hand with mental illness — typically couldn’t qualify for disability under federal law, which would have entitled them to services through Medicaid. Now they are eligible for coverage based simply on their income.

Still, in Chicago, skepticism runs deep in some quarters, fueled by a sharp sense of the stigma attached to mental illness and distrust of the government. Six of the city’s 12 mental health clinics were shut in 2012 because of budget cutting.

“The city, the state, the government, they make all these promises they don’t intend to keep,” said N’Dana Carter, 59, who suffers from major depression and works at the Mental Health Movement, a group that fought the closing of the city clinics. “They assured us a whole corps of providers would open their doors to us when the city clinics closed; well, that hasn’t happened.”

“I really don’t think (the health overhaul) is going to make a big difference,” Carter said.

The city’s mental health clinics now will mostly serve residents who remain without health insurance, said Brian Richardson, a spokesman for the Chicago Department of Public Health. More than 100,000 Chicagoans, mostly people living in the country illegally, are expected to fall into this category.

Current clients who enroll in Medicaid can continue to see providers at the clinics, and new clients will also be accepted, although an effort will be made to counsel them first on other sources of care, Richardson said.

For the moment, the most significant effort to extend coverage to people in the Chicago area who are poor and uninsured is CountyCare, launched by the Cook County health system in February with special permission from federal authorities. To qualify, Cook County residents must be eligible for Medicaid under the state’s expanded criteria. More than 52,000 Chicagoans, many with serious, largely untreated psychological issues, have signed up. Under the plan, each member is assigned to a medical clinic responsible for overseeing his or her care.

“The mental health needs for this newly enrolled population are significant,” and the use of the most intensive services has been 15 times higher than for other, similar managed-care style plans, said Madeleine Gomez of PsycHealth Ltd., an Evanston organization that has managed mental health care for CountyCare.

Heather O’Donnell, vice president of public policy and advocacy at Thresholds, a Chicago agency that works with people with serious mental illness, said advocates and service providers will be watching closely to see whether the mental health services provided through CountyCare and other Medicaid managed-care programs will be adequate in terms of the numbers of participating providers, their geographic distribution and the kinds of services offered.

Legislation passed in 2011 requires Illinois to move half of its Medicaid population into managed-care plans by Jan. 1, 2015, and several plans will be expanding operations across the state in the year ahead. .

Advocates also note that the health care overhaul won’t resolve long-standing problems that have plagued Illinois’ mental health system — low payment rates for services, long delays in paying providers and persistent underfunding — but it does provide a new financing stream that could be used to bolster and expand services.

That’s because hundreds of thousands of uninsured residents previously eligible for state-funded mental health services will now qualify for Medicaid, relieving the state of this financial responsibility. As is true for everyone covered by the Medicaid expansion, the federal government will assume the full cost of their care for the next three years. The state’s contribution will gradually climb, reaching a maximum of 10 percent in 2020.

Policy experts argue that the state should direct the money that is freed up to supportive housing programs — a service that keeps mentally ill people out of institutions — and a broader array of community-based services.

“We know treatment works and that people with serious mental illnesses can have long, healthy, and productive lives,” O’Donnell said. “But the state has to step up and make an investment.”

Patricia, a 25-year-old Chicago woman who spoke to the Tribune on the condition that her full name not be used, is an example of the potential for recovery. Diagnosed with major depression and bipolar disease, the woman was hospitalized five times between ages 17 and 22.

“My moods were just all over the place. I would be supermanic, going a thousand miles an hour, then superdepressed,” she said, describing those years and an 18-month period of homelessness.

Patricia’s last hospitalization proved decisive when a social worker referred her to Thresholds. There she met with a psychiatrist, started group therapy daily, began taking medications, successfully applied for disability coverage, enrolled in Medicaid and got a room in subsidized housing.

Three years later, she’s getting a degree at a local college and still going to therapy.

“My life is completely changed,” Patricia said. “Before, everything was crumbling around me. I honestly don’t think I’d be alive today without their help.”