, produced in partnership with KHN. All rights reserved.

After years of hearings and delays, the possible resolution this fall of a class-action lawsuit against Florida health and child-welfare officials could mean that physicans will at last receive what they consider to be adequate compensation for treating children of the poor. 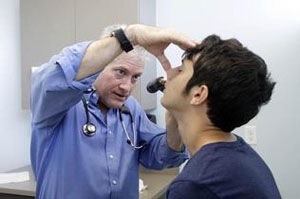 Dr. Bruce Eisenberg, a pediatrician, looks at Jordan Ellison, a patient in his office on Miami Beach. (Photo by Peter Andrew Bosch/Miami Herald)

The lawsuit, filed in 2005 by pediatricians, dentists and nine children against the Agency for Health Care Administration, the Department of Children and Families and the Department of Health, claimed that Florida violated federal law by providing inadequate Medicaid services to children, and that their care had been hampered by low Medicaid payments to doctors. A federal judge is expected to rule on the case in October.

Medicaid payments to pediatricians — and to primary-care doctors in general — were bumped up for two years by the Affordable Care Act. But that will end Dec. 31, and the Florida Legislature’s passage of $3.4 million in increased Medicaid payments to pediatricians for the coming fiscal year doesn’t come close to achieving parity with federal Medicare levels for comparable services.

If the lawsuit goes the plaintiffs’ way, the state might have to come up with about $227 million a year, according to AHCA, to permanently increase payment rates to pediatricians and dentists — although an appeal would likely delay the change.

That leaves some physicians in Florida in a state of limbo, not knowing how much they will be paid or when.

“I can’t be playing games with the government,” said Bruce Eisenberg, a Miami Beach pediatrician who, like many doctors in Florida, reduced his Medicaid caseload over the years to less than 10 percent of his practice because of the traditionally low payments. He and other physicians say they usually operate at a loss when they treat patients under Medicaid.

“I sort of do it as a service to the community,” said Eisenberg, who has been a pediatrician for 25 years. Before the ACA hikes went into effect, he said, Medicaid rates paid to Florida doctors for most procedures were about half as much as those set by Medicare, the federal health insurance program for people aged 65 or older. Many physicians have elected to stay out of the system altogether, leaving low-income families with little option but to turn to emergency rooms or urgent-care clinics when they are ill.

If the payment rates are not permanently improved, “I definitely won’t be increasing my percentage of Medicaid patients,” Eisenberg said. “I could be seeing a lot of other patients who could be paying fairly for my time. My time is valuable.”

During the Miami trial, which concluded in 2012, plaintiffs argued that the state had failed to comply with federal requirements that children receive certain levels of medical and dental services. The plaintiffs said “structural, financial and administrative barriers result in children not receiving the access to care federal law has bestowed as an enforceable right,” and that state agencies had run Medicaid so badly that almost 2 million poor children were receiving care far inferior to that of kids covered by private insurance.

“Florida does a terrible job of ensuring that children get access to medical care,” said Stuart H. Singer, a lawyer in Fort Lauderdale who represents the plaintiffs. He noted that in addition to poor children receiving substandard attention, there was “undisputed evidence” presented at trial that in 2009, roughly 268,000 Florida children who were eligible for Medicaid assistance were not enrolled in the program. And the number, Singer said, is “probably a lot higher now.”

?The plaintiffs, Singer said, are asking U.S. Circuit Judge Adalberto Jordan to rule that payments to physicians — sometimes called reimbursements — be set at levels that would prompt more doctors to care for children on Medicaid.

Until the ?temporary rate increases prompted by the ACA, “Florida’s Medicaid reimbursement rate was among the lowest in the nation,?” said a court document prepared by the plaintiffs in 2012.

During the trial, attorneys for the state said the plaintiffs had not proved their claim of lack of access or that children had been harmed by the rates paid to doctors. Still, Stephanie Daniel, a lawyer for the attorney general’s office, argued that the state’s health administrators were not “deliberately” indifferent to the plight of such children.

Daniel told Jordan — who was sitting on the District Court bench when he was assigned the case — that the children and their pediatricians had failed to prove that delays in accessing medical care were significant or widespread, or that delays were longer than for children with private insurance.

Doctors in Florida maintain that low Medicaid rates are just one issue keeping children from adequate access to health and dental care.

“A lot of the problems essentially have to do with how the program is administered,” said Louis St. Petery Jr., a pediatric cardiologist in Tallahassee. One example he cited: the problem of children unexpectedly being dropped from the rosters, or assigned to new providers, by agencies such as DCF and AHCA.

“There is nothing more frustrating than having a three-month-old kid no longer covered,” said St. Petery. He said the situation could be caused by computer problems compounded by human errors.

“Kids don’t choose to be born to poor parents,” said St. Petery, a Medicaid provider since beginning his practice in 1974.

Florida’s poverty rate of 17.1 percent in 2012 was among the country’s highest, according to Census Bureau statistics. In April, the Commonwealth Fund, a nonpartisan foundation that supports independent research on health and social issues, reported that Florida was one of 13 states that ranked the worst in the nation for access and affordability to healthcare.

Richard Bucciarelli, a former president of the Florida chapter of the American Academy of Pediatrics, one of the plaintiffs’ groups in the lawsuit, said the trial “identified many families who could not find specialists to provide care” for their children.

Bucciarelli said some provisions of Medicaid were passed by the Legislature but not implemented by the agencies. One was so-called presumptive eligibility, which was intended to allow a child to be covered by Medicaid for an initial visit to a doctor based on the family’s eligibility to receive food stamps. Another was the notion of “continuous eligibility” for children under 5, to guarantee access to medical care for low-income children during critical times of need.

Lisa A. Cosgrove, a pediatrician on Merritt Island who testified in the trial, said Florida officials often seek to be exempted from federal requirements regarding such matters “because they wanted to control how many people they have under Medicaid.”

But when patients cannot get consistent care, she said, they become “very much out of control with their chronic illnesses, like asthma or diabetes.”

Cosgrove said she was grateful for the ACA payment raises. Once they kicked in, she said, the number of Medicaid patients in her practice went to 37 percent from 23 percent, and she hired an additional nurse practitioner.

If the lawsuit were to go against the plaintiffs, however, Cosgrove said she would not take on any more patients under Medicaid. But, she added, “I wouldn’t get rid of the ones I have.”

Pediatricians In Florida Could See Relief From Low Medicaid Payments