This story is part of a reporting partnership that includes WLRN, HealthyState.org,

The health law’s expansion of Medicaid will cover some 16 million more Americans in the government program for the poor – if that part of the law survives the legal challenge it faces in the Supreme Court beginning next week. 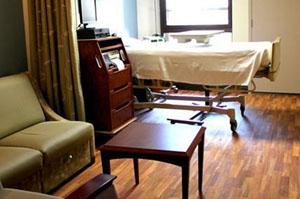 Florida is leading 25 other states in that challenge, but that hasn’t stopped two of Miami’s best-known hospitals from preparing for the Medicaid expansion expected in 2014.

The University of Miami Hospital and Jackson Memorial anchor two separate health systems that are across the street from each other. They share a campus, and they share a lot of doctors. But they are quite different institutions.

The University of Miami’s hospital is owned by a well-endowed private university. Jackson is the massive public safety net hospital that provides the most charity care in town—more than $450 million in uncompensated care last year, fifteen times as much as the university hospital.

To get a sense of how the UM hospital is preparing for Medicaid expansion, it helps to visit the Sabal Palm Supermarket in Little Haiti, where the university health system is at work.

Valentine Cesar is a community health worker who is trying to get women at the grocery store to enroll in a cervical cancer screening program funded through a University of Miami program.

She speaks to the customers in Kreyol and the conversation frequently leads to Medicaid.

“Most of the women I meet that’s the first thing she tell me:  she says, ‘I don’t have Medicaid, I don’t have health insurance,'” says Cesar. “Everybody wants, wants health care.”

But not everybody in this community gets it.

“The reality is there’s no one to pay for their healthcare services,” says Dr. Laurence Gardner, the policy dean for the University of Miami’s medical school and hospital.

Even so, Gardner says Medicaid money spent preventing chronic illness and keeping patients out of the ER is efficient in the long run, which is why the University of Miami’s preparation has included beefing up a network of satellite clinics and hiring community health workers like Cesar.

Gardner uses a sports metaphor to say his hospital is just about ready for Medicaid expansion: “I’d say we’re probably at the five yard line.”

It’s a different story for Jackson, the safety net hospital across the street from the university hospital.

“We’re probably right after kickoff on the 20 yard line with 80 yards to go,” says Carlos Migoya, who has been CEO of Jackson Health System for less than a year. “We’ve inherited a place where basically, we’ve had consistent losses for the past several years.”

Jackson has lost about $420 million in the past three years through a combination of uncompensated care and mismanagement.

Migoya just announced layoffs and cuts of about 1,100 hospital positions.

That means Jackson has a lot to gain if the health law stands in court.

“The Medicaid expansion will have a dramatic improvement to our finances,” Migoya says.

This is the big difference between how the two hospitals see Medicaid expansion.

For the public safety net hospital, Medicaid expansion—which will eventually cover about 2 million more Floridians than it does now—is an answer to relentless financial problems.

For the university-backed health system, Medicaid patients are now a growth market to pursue.

As UM’s Gardner puts it: “Is it a new market? No. But is it possibly the only growing market in this geography for the next five to ten years? Yes.”

That means the two hospitals will begin to compete for newly insured patients.

“A rising tide won’t lift all boats if the boats aren’t gussied up for the patients,” notes Gardner.

Even now, it’s not unheard of for uninsured Jackson patients to transfer to the university hospital if they get insurance.

UM’s facilities are newer. The waiting rooms are less chaotic than Jackson’s.

And that is why the public hospital is gussying up. Administrator Dr. Daniel Armstrong gives a tour of the labor and delivery wing in Jackson’s Holtz Children’s Hospital.

“Some of this flooring hasn’t been replaced since the building was constructed in 1981,” Armstrong points out. The harsh fluorescent lighting does no favors for the layer of perma-grit around the baseboards.

But in the refurbished rooms down the hall there is light blue paint and stylish sconces on the walls.

Armstrong’s boss at the safety net hospital, Migoya, knows the cosmetic fixes won’t work on all the new Medicaid patients. “We believe that some of those patients will choose to go to other hospitals, but that’s ok, too.”

Because, Migoya says, the worst case scenario for Jackson would be status quo.