For the vast majority of parents-to-be, giving birth involves a stay at a hospital or birthing center. But a growing minority are choosing instead to have babies at home, where, they hope, they can have a more private, low-tech experience and allow the process to unfold naturally. It doesn’t hurt that in these days of rising health-care costs, having a baby at home is a lot cheaper, too.

When Jason and Rebecca Sparks were planning for the birth of their second child, Alexander, who’s now almost 4 months old, they decided to have him at their home in Wisconsin Rapids, Wis. The Sparkses had their first child, Ariana, 2, at a hospital in Wausau, about an hour away. The experience felt impersonal, says Jason, now 33, and was more uncomfortable than it needed to be for Rebecca, 31.

Not only that: Even though Ariana’s birth was without any complications, the bill came to nearly $14,000. The Sparkses, who have coverage through Rebecca’s job as a graphic designer, were on the hook for their plan’s $5,000 deductible and nearly $2,000 in other charges.

This time, the experience was very different. Their midwife and her assistant came to the house and stayed throughout the 21-hour labor. Rebecca was able to move around, and she gave birth in a more comfortable squatting position rather than lying down. The price was also easier to manage: $3,500, which they had set aside in their tax-free health savings account. In addition to the delivery, the fee covered both pre- and postnatal care.

“It’s good to have that safety net there of the hospital,” says Jason. “But to rely on them for everything, when health care is so expensive, just doesn’t make sense.” 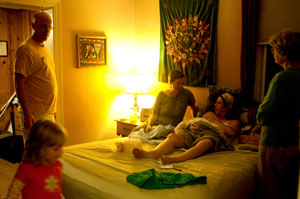 Midwife Erin Fullam, left, takes care of Shannon Earle and her new baby Kiera. Daughter Riana, the father, Patrick, and his mother, Ann Earle, look on at the family’s home in Takoma Park, Md., in 2011 (Photo by Amanda Steen/NPR).

An increasing number of people seem to agree. Between 2004 and 2009, the number of home births grew 29 percent, to 29,650, according to figures released by the Centers for Disease Control and Prevention last month. Although the higher figure represents fewer than 1 percent of all U.S. births in 2009, it’s the highest proportion since data collection began in 1989.

Non-Hispanic white women made up 90 percent of the increase; one in 90 births to these women occurred at home in 2009. Women who gave birth at home were also more likely to be older than 35 and to have already had children than those who gave birth in the hospital, according to the CDC.

The choice to give birth at home doesn’t sit well with many doctors. The position of the American Congress of Obstetricians and Gynecologists (ACOG) and the American Medical Association is that while they respect a woman’s right to choose the birth site, the safest choice is a hospital or birthing center.

Although the great majority of births are routine, unforeseen and life-threatening crises such as severe maternal bleeding and fetal delivery problems such as shoulder dystocia, in which the baby’s head has emerged but the shoulder is stuck behind the pubic bone, do occur.

“Even with the best-trained person at a bedside, if you don’t have access to emergency services there’s only so much you can do,” says Erin Tracy, an OB/GYN at Massachusetts General Hospital in Boston.

The degree of risk in home birth is a matter of heated debate. ACOG cites research that babies born at home are two to three times as likely to die as those born at a hospital. Home birth proponents counter with a 2005 British Medical Journal study that found that the mortality rate for babies in planned births at home was about the same as that of babies born in hospitals to low-risk mothers. Who’s right? What is clear is that, as ACOG states in its opinion, “High-quality data to inform this debate is limited.”

Midwives attend about two-thirds of home births; the others are split between physicians (5 percent) and other attendants such as emergency medical personnel. Not all midwives receive the same training, however, and depending on their credentials they may or may not be permitted to practice in a state. Certified nurse-midwives — registered nurses with master’s-level training in midwifery — can practice in all 50 states and the District of Columbia. They typically practice in hospitals, however, and their clinical training generally emphasizes that.

The training for certified professional midwives, on the other hand, focuses on delivery in a home setting. But these non-nurse midwives, whose certification requires demonstrated competence in various knowledge and skills areas rather than specific coursework or degrees, have had a tougher time gaining acceptance. They are licensed or otherwise regulated in 27 states, including Virginia, according to the Big Push for Midwives, a nonprofit that is working to expand licensure for certified professional midwives. In the remaining 23 states (including Maryland) plus the District, they may be and sometimes are prosecuted for practicing medicine without a license, says Katherine Prown, the group’s campaign manager.

In any state, home births attended by certified nurse-midwives are routinely covered by insurers, says Christine Larsen, president of Larsen Billing Service, which specializes in billing services for midwives and birthing centers. But that’s not necessarily the case with certified professional midwives, she says. “Insurers may not pay even if they’re licensed,” she says.

But it’s always worth filing a claim, says Larsen. “Don’t assume your home birth won’t be covered,” she says. “Insurers may say one thing on the phone and then process the claim and pay. We’ve been very successful getting insurers to pay for home birth.”