Aidan Long is a 13-year-old from Montana who has suffered multiple daily seizures since he was 4. The seizures defy medical cure, and some of them continue for weeks, requiring Aidan to be airlifted to children’s hospitals in Denver or Seattle, said his father, Ben Long. The medical bills to Medicaid and his private insurance have been enormous.

“I kept track of these until about 2 million bucks, and then I said I can’t spend any more time worrying about it,” his father said.

As Senate Republicans seek to limit the amount Medicaid will spend on poor people’s health, they recognize that one group has complex medical issues warranting protection: severe special needs. But Aidan and several million other children would not meet the Senate’s highly restrictive definition of “blind and disabled” children whose health coverage would be excluded from the vast reductions Republicans are pushing.

With federal Medicaid spending predicted to drop 35 percent by 2036 under the GOP plan, states would have to shoulder the high medical costs of children with disabilities or else reduce or rescind health services Medicaid now pays for. Those include doctors and specialists; nurses in schools and at home; prescription drugs; and occupational, speech and physical therapy.

“It’s just a fraction of kids who we consider having special health needs who would qualify for the carve-out,” said Janis Guerney, co-public policy director at Family Voices, an organization of families of children with special needs. “The caps are going to put states under so much financial pressure that they are going to do away with the things they don’t have to cover.”

At risk not only are children living in poverty but also kids from working- and middle-class families who have been allowed to enroll in Medicaid because their medical problems are so extensive that most private insurance will not cover it all.

“Absent those supports paid for by Medicaid, the only option many families will have is institutionalization,” said Meg Comeau, a researcher at the Boston University School of Public Health’s Catalyst Center, which helps states improve insurance for children with special needs. “You’ll see kids going into pediatric nursing homes, kids not being able to be discharged from hospitals.”

States Are ‘Going To Be In A Pickle’

Of the 5 million to 6 million children with special needs estimated to be enrolled in Medicaid, 1.2 million would meet the Senate’s definition of “disabled,” which relies on strict criteria to qualify for federal Supplemental Security Income, or SSI, payments. Those children must come from impoverished families who can prove they are blind or have “marked and severe functional limitations” that are fatal or will last continuously for at least a year. Under the Senate bill, the federal government would continue to pay for a portion of their medical bills without setting a financial ceiling.

That would not be the case for the majority of other children with special needs on Medicaid. They qualify because their families have low incomes, so there has been no reason for states to keep track of them separately. Under the Senate plan, the federal government would give states the same amount of Medicaid funding for those children as they would for a child without disabilities, even though that child’s health costs would likely be much higher.

“The potential consequences could be devastating,” said Sara Bachman, another researcher at the Catalyst Center. “States on their own are quite variable on the ability to support the services kids need. The federal participation in the Medicaid program is in an essential underpinning. States are really going to be in a pickle.”

A Republican Senate aide, who was authorized to speak only on condition of anonymity, said Sen. Orrin Hatch (R-Utah), the chairman of the Senate Finance Committee, and several other Republicans wanted to exempt all children with disabilities from the per capita payment limits. But bill drafters ran into a problem: Lack of information about the broad population of children with special needs on Medicaid impeded them from crafting a more expansive definition, and the Congressional Budget Office, or CBO, could not estimate the costs, the aide said.

“We were trying to get as many of them, if not all of them, exempted from the cap,” the aide said. “But the problem is the only good definition and the only good numbers we had were for SSI.”

The Senate bill would require states to begin reporting details on children with special needs so that Congress could expand the exclusion. “Hopefully in a couple of years, when we have a better idea of who they are, we can get them in there,” the aide said.

Some Middle-Class Families Would Also Be Hit

Until then, the most severe repercussions from the Senate bill would fall on a third group, roughly 400,000 severely impaired children from families who are not in poverty but whose children have high health-related expenses. Over the years, states have received permission from the federal government to let these children go on Medicaid so they could be cared for at home. Otherwise they might need to live in an institutional setting such as a hospital or pediatric nursing home or have a parent quit work to stay with them.

Some of these families, including Aidan Long’s, have private health insurance through work. But even the best policies rarely pay for as much as Medicaid does.

Christy Judd’s 8-year-old son, Ethan, has a congenital neuromuscular disease and needs a ventilator to breathe at night. Every week he gets physical therapy to improve his balance and mobility, and Medicaid picks up the hefty copays for both equipment and care. Ethan is able to attend school in Inwood, W.Va., only because Medicaid pays for nurses and aides to watch him.

“His health care would exceed what we make in a year despite the fact that we have very high-quality health care insurance,” said Judd, a high school history teacher. “He requires eyeballs on him 24/7. My husband and I are human beings. We have to sleep. Without access to Medicaid, he could die.”

I wish she was still here … but if this darn Senate bill passes, I’m almost grateful she’s gone.

Medicaid paid for nurses, a feeding tube and special food for Cara Coleman’s 11-year-old daughter, Justice, until the girl’s death in March. Coleman is an attorney from Waterford, Va., and her husband is an executive, but their private insurance provided only $500 in nursing benefits a year. Justice required 12 to 16 hours of nursing a day, which Coleman said might have exceeded $80,000 a year. Medicaid also paid for a portion of her wheelchair and all of the palliative and hospice care that eased Justice’s pain in her final year of life.

“I wish she was still here and that we didn’t have to let her go so early, but if this darn Senate bill passes, I’m almost grateful she’s gone,” she said. “If she were still alive and we had to face the per capita caps in Medicaid, I’m sure we would be in medical bankruptcy and her life would go down the tubes. I’m glad she went on her terms.”

At Aidan Long’s school in Kalispell, Mont., nurses or aides paid by Medicaid must watch him to make sure a seizure doesn’t cause him to fall and strike his head, Ben Long said. He also gets physical, occupational and speech therapy at school, also paid by Medicaid.

“He has to be relearning basic things, how to walk, how to balance himself,” Long said. Occupational therapy helps Aidan use a pencil and put on his shoes. The school district charges Medicaid for those services, but the Senate plan could jeopardize the funding, potentially forcing superintendents to choose between reductions in special-education services or general programs. 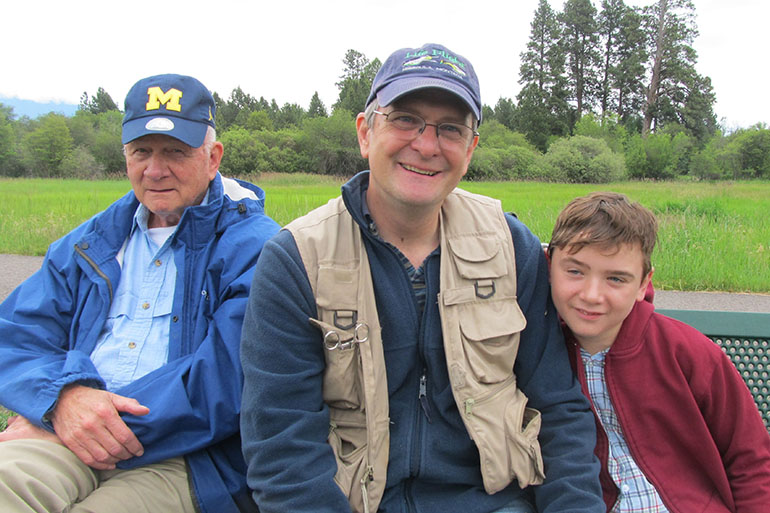 Aidan Long, 13, who is covered by Medicaid because of his serious, nearly daily seizures, enjoys fishing with his father, Ben Long, near their home in Kalispell, Mont. (Family photo)

“We’re really grateful for the local support our school district has shown, but they’re kind of stuck like sandwich meat between the rights of the kids and the capacities of the local taxpayers,” Long said.

Aidan Long’s mother, Karen Nichols, put her photography career on hold to care for him. Still, the Longs need nurses to come to their home four or five times a week to relieve Aidan’s parents. Without that support, Ben Long said he would have to leave the communications nonprofit organization where he works.

On his good days, Aidan is active, kicking a soccer ball and fishing with his dad. When the seizures do not stop, the costs can be huge: $70,000 to fly him to a children’s hospital, where the room alone costs $10,000 a night, Ben Long said. “That’s not the care, that’s just the space,” he said.

As the GOP leadership pushes for the Senate measure’s passage, Long has been trying to rally advisers of Montana’s Democratic governor to raise concern, and he has repeatedly sought to reach Montana’s Republican senator, Steve Daines. He said that after he called, wrote and tweeted the senator, Daines responded with a form letter.

“You meet these parents of other kids with these severe disabilities, these parents are fighting to keep their families together and they’re fighting for their kids’ lives,” Long said. “Everybody’s so busy keeping things together, they don’t have the luxury to hire lobbyists.”