ST. PAUL, Minn. — When Bill Hill prepares to weigh himself each morning, a mechanical voice speaks to him from a small box on his nightstand that is connected to the scale on the floor.

“Ready for Health Check?” the voice asks. “Do you want to check your weight? Please step on the scale.” 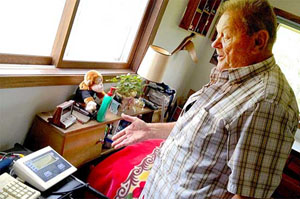 Bill Hill, at his home in Cloquet, Minn., explains the system made by Cardiocom. The box and scale are electronically connected to Essentia Health in Duluth, Minn., where nurses monitor his vital statistics, including weight (Photo by Elizabeth Stawicki/MPR ).

As Hill, 75, steps on the scale, his weight appears 24 miles away on a computer monitor at Essentia Health in the northwestern Minnesota town of Duluth. There, registered nurse Denise Buxbaum monitors his health as part of a program that aims to keep about 300 heart failure patients out of the hospital.

For Hill, who was diagnosed with heart failure more than seven years ago, the morning weigh-in has become as routine as putting on his shoes. Like countless other patients nationwide, he’s becoming more involved in his healthcare.

That’s a major goal of the federal health care overhaul. Essentia Health has been taking care of patients like Hill with telehealth tools like the special scale since 1998. And now it is an Accountable Care Organization, or ACO. That means it takes responsibility for the health of a population of Medicare beneficiaries and can share any savings created by keeping people like Hill out of the hospital.

Data is key to making ACOs work. Armed with information, patients can alert doctors to potential problems early and prevent complications. If Hill’s weight goes up, a nurse or nurse practitioner will call him because heart failure patients gaining just one extra pound can signal a problem.

Something as simple as eating salt the day before can boost his weight, as it makes him retain water. Because a heart failure patient’s heart is already weakened, it can’t handle the extra fluid, which eventually can back up into the lungs. 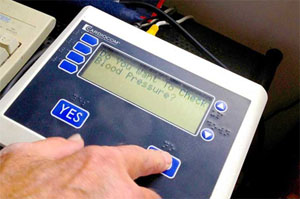 The electronic scale system made by Cardiocom prompts patients to check their weight as well as blood pressure. That data then flows to nurses at Essentia Health in Duluth, Minn. (Photo by Elizabeth Stawicki/MPR).

When that occurs, a nurse practitioner can prescribe a diuretic for one day to pull water out of the body. Sometimes that’s enough; other times it’s not.

Although the scale provides a daily link to caregivers a half hour away, they can detect only so much. Follow up with the patient is still necessary. “They’re not a treatment; they’re a tool,” said Linda Wick, nurse practitioner manager of  Essentia’s heart failure program.

“The bigger picture is the nurses are talking to them, they’re finding out what’s going on,” Wick said. “They’re assessing, ‘hey, maybe they ran out of their medications because they couldn’t afford them’….so the nurses can pull in resources to help them get their medications.”

Nurses also can gauge whether a heart failure patient is is suffering from depression, which can make heart disease worse.

When nurses detect symptoms that indicate patients could be depressed, the nurses will make appointments for them to see their primary care doctors. They do the same for patients being treated for other illnesses, such as diabetes.

Essentia’s heart failure program, which began in 1998, has evolved over time. Wick said no more than 2 percent of the heart failure patients in Essentia’s program need to be readmitted to the hospital within 30 days. That’s a fraction of the national average of about 25 percent.

Essentia rents the scales from a company based in Chanhassen, Minn. Essentia wouldn’t divulge what it pays, only that it receives a discount for what would cost between $60 and $100 per patient per month.

Wick said an average hospitalization for heart failure at Essentia Health-St. Mary’s Medical Center costs between $6,000 and $11,000. If the patient needs to be readmitted, she said, the cost is more.

Keeping heart failure patients out of the hospital is not only good for patients, it’s also good for medical centers’ bottom lines, particularly now. Last year, as part of the federal health care law, Medicare started penalizing hospitals that had too many heart failure readmissions.

Such readmissions are expensive and put patients at risk, said Susan Mende, a senior program officer for the nonprofit, nonpartisan Robert Wood Johnson Foundation, which focuses on improving the health system. “Unnecessary readmissions really negatively affect people’s health, and they put a huge burden on patients and their families, and they cost our country billions of unnecessary dollars,” Mende said. “So I think we’re seeing more and more strategies for better home management.”

Mende said it’s likely there will be more strategies to connect health providers with patients in their homes.

For Hill, stepping on a scale once a day means that he and his wife can tend four horses on their hobby farm.

“I ride [a] four-wheeler,” he said. “I got a diesel tractor out there that I clean horse biscuits out of the pasture with and dump on a manure pile, and I don’t work real hard. I don’t beat myself to death but I stay active.”

That activity not only keeps Hill healthy, but also keeps him out of the hospital — and saves the health care system money.

This story was part of a collaboration between Kaiser Health News, NPR, and MPR News.

Talking Scales and Telemedicine: ACO Tools To Keep Patients Out Of The Hospital