ST. PAUL, Minn. — A former patient of embattled Fairview Health Services testified that a billing employee approached her for payment while she was writhing in pain from a kidney stone in the emergency room. 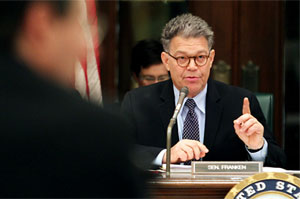 Franken, D-Minn., sits on the Senate Health, Education, Labor and Pensions Committee, and wanted to examine whether federal laws protecting patient privacy should be tougher.

The hearing follows a probe by Minnesota Attorney General Lori Swanson that alleges that Accretive used strong-arm tactics to pressure patients into paying for their care up front.

Deb Waldin of Edina testified that while curled up in a fetal position on a Fairview Southdale emergency room gurney last July, alone and waiting for a doctor, a billing agent came in and asked her to pay $750.

“I couldn’t believe he was asking me this at the foot of my bed as I’m laying there,” Waldin said. “I said, ‘I’ve got insurance, I don’t know what you’re talking about.’ And to be clear, I didn’t have any debt with Fairview. And he was asking for this money right then. And I just ultimately told him to get out of the room and go away, and he did.”

Another patient, Tom Fuller of New Brighton, told the committee about visiting a Fairview hospital for a procedure a couple of months after a lung transplant. Unlike other visits, he was escorted into a small room, where a man checked him in and put a bill for $500 in front of him.

“I just felt badgered, extremely upset,” said Fuller. “Finally he said, ‘I’ll take a check or a credit card, however you want to pay it.’ And I said, ‘I have no intention of paying you anything right now; I’m going in for a procedure.'”

The Fairview story dates back to July 2011, when an unencrypted laptop containing the personal information of more than 20,000 patients was stolen from an Accretive employee’s car, where it was in plain sight. That prompted an investigation and subsequent lawsuit against Accretive by the AG Swanson. She has also accused Accretive of various legal violations due to its bill collection practices.

Fairview’s soon-to-be interim CEO Charles Mooty issued an apology at the hearing, as well as a commitment to regain the community’s trust.

Chicago-based Accretive has gone on the attack. A company statement last month said extensive inaccuracies, innuendo and unfounded speculation have been part of the attorney general’s recent allegations.

Greg Kazarian, senior vice president of operations, said at the hearing that he had worked at the company for more than seven years and that the public portrayal of company’s operations is distorted.

But he also said he takes the attorney general’s allegations seriously, and if they’re true, the company sincerely apologizes.

During a question-and-answer period, Franken read aloud part of a letter in which Kazarian said Accretive employees “worked to communicate with patients with the greatest possible compassion.”

Franken then read an internal Accretive email written by an employee who described patients as “deadbeats.”

“That he ‘really takes the approach of really being stern and calling people out for being stupid, because if they keep hearing it, they may eventually realize their stupidity and possibly feel just a hint of guilt for being such a schmuck,’ ” Franken read.

“That language, that attitude, does not square with our values, not consistent with our values,” Kazarian responded. “And that employee was terminated within 24 hours of us discovering that email. So let me just say for everybody here, make it clear that is not who we are and that’s not what we do.”

Franken wrapped up the hearing saying this was just the beginning of his investigation, and said he’d hold the record open for a week to accept more questions and comments.

This story is part of a reporting partnership that includes Minnesota Public Radio, NPR and Kaiser Health News.

Debt Collectors In The ER