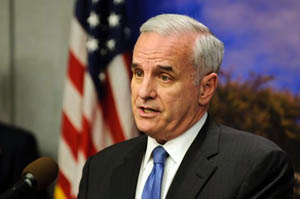 The legislation creates a new marketplace for health insurance, which Dayton’s administration has given the name, “MNSURE.” Starting in October, more than a million Minnesotans, including 300,000 uninsured, are expected to shop and sign up for health plans using MNSURE.

After exchange legislation stalled for two years when the GOP controlled the Legislature, the Democrats pushed a bill through this year with remarkable speed. The legislation hit the governor’s desk in plenty of time to meet state and federal deadlines.

As Dayton sat down to sign the bill in the state Capitol’s great hall, about 50 lawmakers, cabinet members and staff quieted for the moment the sweeping new law took effect, as cameras clicked away.

The bill’s Senate sponsor, Tony Lourey, said he became choked up as he watched the governor sign the measure. “This is a big deal for our people, for our families, for our small businesses that have struggled to find affordable health care options for the people of Minnesota,” Lourey said.

The final version of the bill passed without a single GOP vote, capping three years of staunch Republican opposition.

While Lourey was emotional, the bill’s House sponsor, Rep. Joe Atkins, joked about how hard it was to shepherd the legislation to passage. “I literally just had a filling put in at the dentist without Novocain because I was a little afraid — I didn’t want to come here and drool all over,” Atkins said. “It was actually a little less painful than going through the legislative process.”

Jokes aside, Atkins said Republicans made many important contributions to the bill. Even though Republicans did not vote for it, Atkins said, they did great work in beefing up privacy protections and oversight provisions.

Several key questions about the future of MNsure remain, including whether insurers will participate in robust numbers, how many people will use it and will the massive IT system needed for the marketplace work. Still, Atkins said the result will provide consumers with a convenient way to buy health insurance online and a level playing field with health insurers.

“Literally, at this point in time, health carriers will have to compete more fiercely than they ever have in the last 50 or 100 years for consumers’ business,” Atkins said. “And that’s not something we’ve ever seen in Minnesota before.”

Julie Brunner of the Minnesota Council of Health Plans, a trade organization that represents the state’s health insurers, said the organization took exception to Atkins’ comment and that competition is fierce now.

“I know from talking to sales people and the health plans that they will frequently see a business make a change from one carrier to another carrier for a 1 percent difference in premium,” Brunner said.

Brunner warns that the exchange’s current structure may backfire. She said insurance will cost more, meaning the number of people without insurance may grow, not shrink.

This story is part of a collaboration that includes Minnesota Public Radio, NPR and Kaiser Health News.