But as chairman of the Health and Human Services Reform Committee, he decided he needed to weigh in on the exchange. Unfortunately, from his standpoint, all the choices are bad. 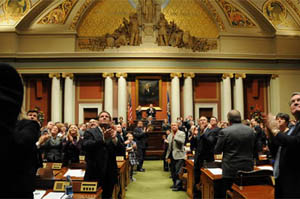 Governor Mark Dayton delivers his first State of the State address to a Joint Session of the Minnesota Legislature in February (Photo by the Gov. Dayton’s Office via Flickr).

He is not alone. While health care reform may have cost the Democrats control of the House of Representatives in the midterm elections last year, it is the Republicans in statehouses around the country who are feeling the heat in 2011, and insurance exchanges are at the heart of the controversy. The health care act, written, voted and signed by Democrats with no Republican help, is the law, and it is up to state legislatures across the country to implement it. And the split between traditional Republicans and the more conservative tea party movement is making the issue even more heated in places like Minnesota.

Insurance exchanges, enabling individuals and small businesses to shop for medical coverage in much the same way that travelers troll the Web looking for bargain airfares, are a cornerstone of last year’s federal health care law.

For Democrats, beginning with President Barack Obama, the exchange is a tool to help bring affordable health care within the reach of all Americans by encouraging competition among insurers and providing access to a variety of policies. Republicans, by contrast, regard it as a possible, or even likely, first step down the road to a government-controlled insurance system.

The law describes in some detail how the exchanges are to be set up, but leaves states considerable leeway in how to structure them. States must have their plans ready by 2013 so the exchanges can begin operation on Jan. 1, 2014. If states do not have their own plans, the federal government will set one up for them.

Gottwalt, who used to work negotiating health coverage contracts for provider networks, felt responsible to deal with exchanges. He could have taken the wing-and-a-prayer approach recommended by tea party conservatives: repudiate the law, refuse to implement an insurance exchange, hope the Supreme Court rules it unconstitutional, or, if it does not, hope that the Democrats lose the White House and the Senate next year so the Republicans can repeal the law. This strategy is relatively easy to promote in states where legislatures and statehouses are both in Republican hands.

If the Supreme Court leaves the health law in place, Dayton might offer his own insurance exchange proposal, or, failing that, Minnesota would get the one-size-fits-all federal template.

Gottwalt finds this last possibility particularly abhorrent, so he chose a third option. He wrote a Republican exchange bill that tries to temper the government’s role. He said he hoped the bill would be taken seriously by Dayton and not used as “the beginning of Obamacare.” Minnesota “should implement an exchange and define it for ourselves,” he said. “I could not absolve myself if I did nothing.”

He filed the bill in mid-February. And it has sat in limbo ever since. There have been no hearings and no votes, either in committee or on the House floor. The bill has few co-sponsors, and some of those who signed on at the beginning have now abandoned it. Many Republicans who hate the health care act say that Dayton and the Democrats would alter any proposal the GOP put forward.

“We would just be setting them [the Obama administration] up with the vehicle that will put Obamacare in place in 2014,” first-term Republican Kathy Lohmer said of Gottwalt’s bill. “A significant number of Republicans will not support it.”

With the current legislative session scheduled to end May 23, the legislature’s Republican leadership is beset from all sides. Commerce Commissioner Michael J. Rothman, the lead negotiator for Dayton, said a health insurance exchange is “a top priority” of the administration, which is trying to determine whether lawmakers have “the political will” to produce a bill. So far they do not. The GOP cannot find a position-Gottwalt’s or anyone else’s-that is acceptable to the members of its own caucus.

Business groups-traditionally a strong ally of the Republicans-want an exchange in order to avoid the federally imposed plan. The legislative leadership is sympathetic to this view, but worries that conservatives will gin up so much grass roots opposition that the GOP will lose its majorities next year. The Dayton administration has not announced a proposal of its own. Why be hasty, when the opposition is in disarray?

Similar conflicts are underway across the country. Only six states have enacted health insurance exchanges, and two of these (Massachusetts and Utah) predated passage of the health care law.

There are 18 lawsuits pending in federal courts challenging all or parts of the health care act. So far, the courts have ruled three times in favor of the law and twice against it. The Supreme Court earlier this month refused a request by Virginia to hear a case this term, and will probably not take it up until 2012.

This leaves conflicted states like Minnesota to mark time while the Republicans figure out what to do. The suits focus mainly on the constitutionality of a requirement-known as the “individual mandate”-that all Americans buy health insurance. But without the mandate and the tide of new purchasers it would bring, it is difficult to see how an insurance exchange could work effectively.

While Dayton has not proposed his own Minnesota plan, Rep. Erin Murphy, of the Democratic-Farmer-Labor Party, as the Democrats here are known, has filed what she calls a “robust” exchange bill. It sets up a new state agency to administer the exchange with a governor-appointed board of directors. Besides private insurers, the exchange “shall offer at least one public plan” sponsored by the state, the bill says. Republicans loathe this “public option.” The bill has had no hearing.

Gottwalt’s plan, worked out with input from the health insurance industry, private business and some conservative stakeholders, envisions a nonprofit, government-affiliated “corporation” within the framework of the health care law. The board of directors would elect its own members and would operate independently, although the state commerce commissioner would regulate the exchange. The plan makes no mention of a public option.

Conservatives like Lohmer and fellow first-termer Doug Wardlow have refused to support Gottwalt’s proposal because, Wardlow said, “there ultimately would be little difference” between it and a federally imposed framework. “Both use the same federal regulations,” he added, and the end result would be a government-controlled health care system.

Business Groups Pushing For A Plan

It is unclear how the rejectionist strategy will play among voters, but pressure is mounting to do something because both parties regard Minnesota as a leader in health care innovation. Minnesota’s health care consistently ranks in the top tier of states.

“We have been able to support creative health care ideas over the years, and we should design a health care exchange that best fits Minnesota’s needs,” noted Tom Hesse, chief lobbyist for the Minnesota Chamber of Commerce. “If we don’t design an exchange in Minnesota we will get what Minnesota really doesn’t need-a federally imposed plan.”

Chamber President David Olson formally broke with the conservatives in a mid-April speech, and in an April 26 op-ed column in the St. Paul Pioneer Press, Commerce Commissioner Rothman seconded the chamber and called for a “Made in Minnesota” insurance exchange.

In this rapprochement, University of Minnesota political scientist Larry Jacobs sees the beginnings of consensus. “So far the Republicans are enraptured by ideology,” Jacobs said. “But business has a number of levers. They can hold back [campaign] contributions, for one.”

Conservatives understand that the Republican establishment is trying to put them in a vise. But the new conservatives “represent the people, and not the special interests,” Rep. Mary Franson, also a first-term Republican, said. The Chamber of Commerce is wrong, she added, and will find “we have the people on our side” and they will apply pressure of their own.

If there is a compromise, Gottwalt’s exchange bill, or something like it, should be in the conversation. But while Gottwalt acknowledged that “we have a lot of cover” for developing a Republican plan, he cautioned that for a compromise to succeed, there “has to be some trust” within the Republican Party and between the party and the Dayton administration. “This is going to require some political courage,” he said.