This story is part of a reporting partnership that includes MPR, Kaiser Health News and 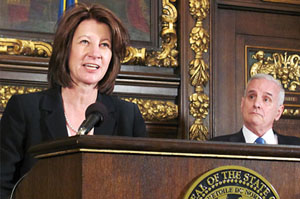 Under that agreement, the health plans pledged to return any profits above 1 percent of their revenue from the Medicaid and Minnesota Care programs.

The refund is slightly less than the $85 million state officials estimated a year ago, based on the HMOs’ 2010 financial results. Because the money involves the joint federal and state Medicaid program, Minnesota will have to share about half of the money with the federal government — which means Minnesota should get about $35 million at the end of July, which will go into the general fund.

The Dayton administration had inherited from former Gov. Tim Pawlenty’s administration a three-year contract between the state and the largest HMOs to deliver health care to low-income Minnesotans and their families. In this last year of that contract, the Dayton administration made a deal for Minnesota’s HMOs to voluntarily cap their profits at 1 percent of revenue from the programs. In making the announcement Tuesday, the governor brushed off concerns that there was something financially amiss with the plans’ profits.

Minnesota’s Human Services Commissioner Lucinda Jesson negotiated the 1 percent cap and said it is a bridge to a better approach — requiring the plans submit to competitive bidding. Administration officials say that approach, combined with other adjustments, will save state and federal taxpayers half a billion dollars over the next two-year budget cycle. Jesson also announced the competitive bidding process would be expanded to other parts of the state. And Jesson said independent auditors will also review the HMOs’ books to verify the payments announced today are the right amounts.

“The auditors will also look and make sure that the way the health plans did the calculation to say how much is above the 1 percent is legitimate. And I’m not trying to question their judgment but it will be a second look at that, an independent second look,” Jesson said.

One of the plans that will repay the state is Medica, which will return about $25 million. Medica spokesman Larry Bussey said the plan’s profits topped 1 percent in part because of efforts to hold down costs and the state’s expansion of the Medicaid program. He said that expansion brought a new population of people who ended up using less health care than was expected.

One of the other HMOs, UCare will return $8 million to the state. UCare spokeswoman Ghita Worcester said that $8 million came from “a lot of hard work that went into keeping our administrative costs as low as possible and initiatives for cost savings [such as] reducing readmissions.”

The $8 million from UCare is on top of a $30 million donation to the state that sparked an inquiry by U.S. Sen. Chuck Grassley, R-Iowa. Grassley has raised questions about whether the repayment was cast as a donation instead of a refund to avoid having to pay some of it to the federal government. There is also an unspecified federal investigation of the Medicaid program underway.

Commissioner Jesson replied saying there was no legal basis to compel a repayment so the $30 million was a voluntary donation. But documents released also indicate Medicaid officials still have questions, including how UCare officials described the repayment internally.

When Grassley heard about the total $73 million from the four major plans, his office emailed MPR News to say, “Given the $30 million ‘donation’ from UCare, the state’s recent track record of arriving at accurate payments is questionable, so there isn’t much confidence in the process behind today’s announcement.”