Officials with Minnesota’s troubled online insurance marketplace heard from the authors of a scathing independent report and began weighing the crucial question of what do do next. 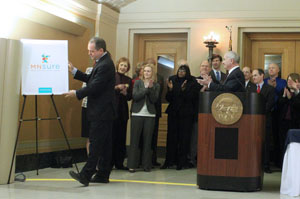 “Is it irreparably broke?” MNsure‘s chairman of the board Brian Beutner asked during the insurance marketplace’s board meeting on Thursday.

Optum, a subsidiary of UnitedHealth Group, prepared the report as an end-to-end review requested by MNsure board members. It found that MNsure is unlikely to meet its enrollment goals this year and fixing the site completely could take up to two years.

Optum’s Jim Eppel, a former insurance executive, told the MNsure board that’s not unusual when a project starts to unravel.

“It’s not  uncommon, in heat of all that was going on in short-term needs versus long-term needs to take your resources, to go after the fires,” Eppel said.

The report lists numerous problems with MNsure, among them:

Optum’s Laura Groschen said MNsure has three options:  Two involved fixing the current system, which could take up to two years to complete; A third option involved getting the system minimally functional for 2015 enrollment while building a new system from scratch.

In that scenario the report said the “existing asset may need to be written off — sunk costs.”

Optum did not provide cost estimates. And when asked to pick a favorite option, Groschen wouldn’t commit.

“I know it feels unsurmountable but all three options have their pros and cons to them, but we wouldn’t have recommended them if we didn’t think it would get you to an endpoint,” Groschen said.

What is clear from the options is that end point — a working MNsure website — won’t happen before the March 31 deadline this year when most Americans must obtain health coverage or pay a penalty.  As a result, MNsure staff will have to conduct manual workarounds to get Minnesotans enrolled.

But missing from Optum’s report was just how MNsure reached this point, something board member and Human Services Commissioner Lucinda Jesson asked about:

“Could you just help the board understand what was it that was working?” Jesson said. “Because I think as we’re really looking to make sure that we have the governance and oversight that’s in place, we want to understand what worked in the past.”

Groschen said she wasn’t sure Optum could comment on that: “What we decided to do was not spend a ton of time on the past.”

Jesson floated the idea of hiring a new prime contractor. Board Chairman Brian Beutner was open to that suggestion.

“Everything should be on the table,” Beutner said. “I don’t think we should rule anything out.”

Meanwhile MNsure’s interim CEO Scott Leitz says MNsure will act on the recommendations and decide which option to pursue to get the website working properly within the next several weeks.

“That whatever process or path MNsure takes, there’ll be more collaboration between all of the vendors and the partners including the health plans in terms of how we build this,” Bartsh said.

MNsure also released new enrollment numbers as of Jan. 18: a total of about 80,000 enrollments with government programs running 2 to 1 over enrollments in commercial insurance.

This story is part of a reporting partnership that includes MPRnews, NPR and Kaiser Health News.

Minnesota’s MNsure Exchange Weighs What To Do Next