Gov. Phil Bryant, a Republican elected in 2011, has been a vocal opponent of the 2010 health law. KHN correspondent Phil Galewitz sat down with him at his office in Jackson, Miss., last week. Below is an edited transcript of their conversation.

KHN:  Why do you oppose setting up a state health insurance exchange?

BRYANT: Prior to the Supreme Court ruling, all of us Republicans across the nation believed this was a failed law, a law that would drive up health insurance costs, a law that would causes taxes to go up on employers and cause all Americans to have to buy a product in a marketplace at the insistence of the federal government, and [you] could be punished for your inactivity. I am against the foundation that it rests on.  This is a terrible law that continues to be flawed. The Supreme Court decision, which people believed changed everything, said one, there is a tax, which the president had been denying since the beginning, that it will cause costs for employers to go up, but also states cannot be forced to expand Medicaid.  I believe that this is a bait and switch, where they say here is $20 million and you form a state insurance exchange. Let the governor sit idly by in Mississippi and say nothing and that exchange will inherently determine if you deserve a subsidy, but also can automatically take you to Medicaid. 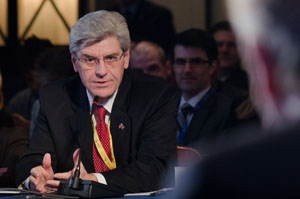 KHN: What’s wrong with the exchange directing people to Medicaid?

KHN: But won’t the exchange send people to Medicaid, no matter if the state or the federal government runs it?

BRYANT:  Remember what the Supreme Court said. The federal government cannot force the states to expand their Medicaid population. My argument [is] you are automatically expanding my Medicaid population. We can’t fund the Medicaid population we currently have without two things — raising taxes or making tremendous cuts, draconian cuts, in education, transportation, public safety and job creation.

KHN: What is the cost to the state of having 17 percent of the population without health insurance?

KHN: Some experts may argue people new to Medicaid have many health issues they need to address.

BRYANT: I make the argument that it’s free. It’s free and you have nothing else to do.

KHN: Are there any positive benefits to people being on Medicaid?

More About Mississippi And The Health Law

BRYANT: Medicaid was meant to be a temporary [stop]gap for providing you medical treatment while you are looking for a job. Now we are saying, you can have a job and still receive Medicaid. So we have changed the whole dynamic. There is very little incentive for those 940,000 people on Medicaid to find a better job, or to go back to school, or to get [into] a workforce training program because they say: Look, if I go over $33,000,  [I] will lose Medicaid. There is no one who doesn’t have health care in America. No one.  Now, they may end up going to the emergency room. There are better ways to deal with people that need health care than this massive new program.

KHN: Didn’t you support the concept of an exchange when you were lieutenant governor in 2009?

BRYANT: This is totally different. It was a Web-based system [we had worked on], where we hoped the private market, through competition, would provide lower rates. Democrats came in and said: We have a vehicle that came from the Republicans called an exchange, and let’s make that the central portal to expand Obamacare in the states, and if they don’t, they say you supported it before. That is patently untrue. If the federal government wants to use the exchange to expand Obamacare in Mississippi, let them do it. Let them try to meet the Oct. 1 deadline [to begin enrolling people], and let them come in and try to find personnel. Let them try to find the health physicians and nurses to provide the additional health care.

KHN: Will you do anything to block a federal exchange from operating in your state?

KHN: Will you block the sharing of information from the federal exchange to your Medicaid agency?

BRYANT: I have not made that decision yet. I am not going to violate the federal law if I believe that law to be fair… We don’t know what’s in this law. No one knows the full comprehensive effect of what this law will do. If we continue to determine the law is in violation of the 10th Amendment, and states have the right to resist some of those measures, then we will seek opportunity to do that in court.

KHN: Is your dispute with Insurance Commissioner Chaney a microcosm of a split among Republicans regarding the health law?

BRYANT: I think it’s a reflection of the massive confusion that exists about this law and its implementation. We are about to expand the largest social program since the Great Society and have very little known about what the law does. We have never done this type of thing before. Employers are very nervous. Members of the legislature are confused. They want to do the right thing. There is a political dynamic in this. Let’s be fair. If the Obama administration is expanding entitlements into states through expanding Medicaid, do they hope to reap some political benefits from that?  Of course they do.

KHN: Is the reverse true?  Do you hope to receive political benefits from resisting implementing the law?

BRYANT: I think not. The easy political thing for me to do is to say: Oh yes, we are going to hand out this entitlement to another 300,000 people. And then I could campaign all across the state and say: Don’t forget you got that from me. I brought you free health care. That would be the easy thing to do. The hard thing would be, in 20 years, to explain to my grandchildren why they have to pay this massive debt that will continue to exist in America. That is the decision we are going to have to make: Do we take the easy way? Do we say: I am going to be so popular and surround myself with people to whom I am providing free health care? Or do I worry about future generations and the collapse of our free market system in America?