This story is part of a partnership with

Immediately after the presidential election, and more than a week ahead of the Nov. 16 deadline, Missouri Gov. Jay Nixon, a Democrat, announced he had made up his mind. The state would not be setting up its own health insurance exchange.

Next door in Kansas, Gov. Sam Brownback, a Republican, made a similar announcement. These governors’ moves open the door for increased federal involvement in health care in both states.

President Barack Obama’s health law has never had any easy time in this part of the country. “Kansans feel Obamacare is an overreach by Washington and have rejected the state’s participation in this federal program,” Brownback said in a statement. 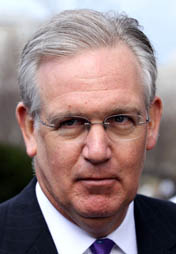 In Missouri, the law is facing an even steeper uphill battle. Last week, voters overwhelmingly approved a measure prohibiting the governor or any state agency from making any moves toward setting up an exchange without legislative approval. The full bill also allows taxpayers to sue a state worker or agency over being involved with any part of the exchange process that’s not required by federal law, whether that be assisting a federal agency or providing resources.

A bill that would have authorized a state exchange stalled last year, and state lawmakers haven’t taken any action on one since then. They don’t convene again until January, well past some of the federal government’s key deadlines, even with the recent deadline extension.

“Based on current state law, and the federal deadline, the state-based option isn’t on the table for Missouri at this time,” said Nixon. So a federal exchange seems to be the only possibility.

Some health policy experts find the situation in Missouri ironic. “We have a state that is very much committed to state rights and state control,” notes Thomas McAuliffe, with the Missouri Foundation for Health. “Yet we’re willing to just blindly cede all creation and administration of a health exchange or insurance state marketplace to the federal government.” The foundation helped fund efforts to plan an exchange.

McAuliffe doesn’t want to write everything off just yet. He thinks states like Missouri are likely to become more involved in the process, as the political dust settles. Nixon himself said in his announcement that falling back on a federal exchange isn’t ideal: “Regulating the insurance market is a power best left in the hands of the states, where we perform those duties more efficiently and effectively, and provide better service for our consumers.”

Early on, Missouri made some progress toward setting up an exchange, as had Kansas. While that’s come to a halt in both states, there are still those like Kansas insurance commissioner, Sandy Praeger, who want the state to be involved in a hybrid state-federal partnership. 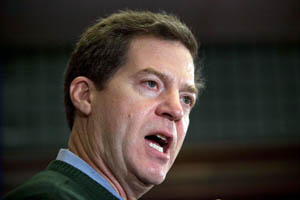 Praeger says that will depend on the path Brownback takes with his new legislature in the months ahead: “His concern is that they have all these new conservative Republicans that won’t want to go along with a partnership exchange,” Praeger said, “but I’m still hopeful.”

In his statement, Brownback wrote: “My administration will not partner with the federal government to create a state-federal partnership insurance exchange because we will not benefit from it and implementing it could costs Kansas taxpayers millions of dollars.”

McAuliffe believes that by extending the deadline for states to declare how they will run their own exchange, the HHS is signaling a bit of desperation. And what that means, he says, is that states like Kansas and Missouri still have an opportunity to get more involved if they choose.

No matter who is in charge, the health law calls for all of these exchanges to be up and running in a little over a year. That’s not a lot of time for either federal leaders or the health care industry to work out the details and make sure everything’s ready.

This story is part of a partnership with NPR, KCUR, and Kaiser Health News.