A Republican House member has filed a bill to expand Missouri’s Medicaid program, but the bill has a new twist.

To be eligible, working-age Medicaid recipients would have to have jobs, said the sponsor, Rep. Noel Torpey, R-Independence. Some participants also would have to pay monthly premiums. 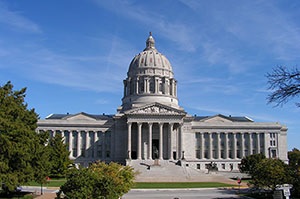 “I’m sure there’s stuff that needs to be tweaked,” Torpey said. “But whether you agree with the Affordable Care Act or think it’s a train wreck, we in Missouri should have some say in how we make some adjustments in the Medicaid health care system. Washington may have blown it but that doesn’t mean Missouri has to.”

The heart of the bill would expand the public health insurance program to adults whose income falls below the poverty level — for example, $15,510 for a single parent with one child.

Torpey noted that currently, people making four times that amount can get tax credits to buy private insurance through the federal marketplace, but people below the poverty level can’t get any help since Missouri has not expanded Medicaid.

“It’s the single mom who works two jobs at 25, 30 hours a week that this will help,” Torpey said.

Torpey’s bill was not available online by early Tuesday evening. But he said it would require that Medicaid recipients be working or in school, similar to a pending proposal in Pennsylvania.

In other highlights, he said the plan would:

Missouri would need a federal waiver of Medicaid rules to implement the Medicaid changes.

Torpey headed an interim committee that held hearings around the state last summer to seek public opinions about Medicaid.

Co-sponsoring Torpey’s bill is Rep. Jay Barnes, R-Jefferson City, who chaired a separate interim committee that debated various Medicaid reforms but did not endorse a bill.

The Missouri Chamber of Commerce and Industry, which backs Medicaid expansion, immediately touted Torpey’s plan as “the compromise to secure billions of dollars in federal Medicaid funding.”

While that prediction might be premature, the bill could get the debate started on a subject that has not gained any traction this year in the Republican-controlled Legislature.

Earlier this month, the Senate defeated Medicaid expansion on a vote of 23-9, with Republicans opposing the idea and Democrats supporting it. But supporters said that was not a true test because no reforms were included.

Under the Affordable Care Act, the federal government has agreed to pay the full tab for Medicaid for the first three years if states cover people making up to 138 percent of the federal poverty level, or $32,500 for a family of four. States would pick up a share, ranging up to 10 percent, after that.