ST. PAUL, Minn. — Minnesota’s new online health insurance marketplace, MNsure has been open for four weeks. But efforts to inform hard-to-reach populations about how they can sign up for health care coverage are only now getting underway.

That’s what brought employees of Southside Community Health Services on Saturday to Karina’s Beauty Salon in the heart of the city’s Latino community. The organization has received part of a $4 million federal grant to help explain what MNsure is about and help people sign up for coverage, and the Latino community is an important target for MNsure outreach efforts.

With that mind, a beauty salon in St. Paul’s West Side neighborhood was the perfect place to start, said Clarence Jones, the health organization’s outreach director.

“Barber shops and beauty shops are really one of the places where people come and they talk to trusted messengers,” Jones said. “So we know that people are concerned about their health, and so we wanted to establish kinds of relationships with barber shops and beauty shops that we can give them information on how to access medical care, which is an issue in many communities.” 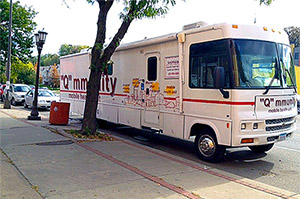 But when Jones and several colleagues visited the salon, they had no takers, even though the state’s Latinos are three-times as likely as white residents to lack health insurance.

They set up shop in a big white bus parked outside and squeezed into available niches in the salon to screen customers for health problems, give flu shots, and spread the word about MNsure. They call it the clipper clinic.

Salon owner Karina Cardoso said 90 percent of her customers are Latino. She said most are like her, self-employed with no health insurance.

“When I talk to the clients, there is a huge thing now with Obamacare,” she said. “And I don’t think that a lot of us know exactly what Obamacare is.”

Southside community worker, Miguel Rivera, who is MNsure-certified to provide help as a so-called “navigator” said that confusion about the health care law championed by the president is common among the people he sees.

“They’re totally confused,” he said. “The client has to get into it and navigate the system, but people can do it.”

As a MNsure navigator, Rivera can help if clients can’t manage alone. But when the five-hour clinic ended, he hadn’t signed up anyone for a plan on MNsure.

On board the bus, Southside Community health worker, Heidi Benson wasn’t discouraged. She said up to 40 percent of Latino patients at Southside’s health clinics are undocumented immigrants. Even people who are legal immigrants and qualify for coverage may not sign up to protect a family member who is in the country without authorization.

Benson said the “clipper clinic” at Karina’s is only the first step in a continuing conversation about MNsure.

“I think it opens up… the ability for the conversation to broaden,” she said. “So people who’ve been afraid or don’t know what questions to ask, when they hear more information start to understand that it’s OK to ask any questions and hopefully get the answers they need to go forward and take care of themselves.”

Outreach efforts have been slow to get off the ground due to delays in training, background checks, and finalizing MNsure’s contracts with organizations that provide one-on-one help.

Mollyann Brodie, who directs Kaiser Family Foundation’s tracking poll on the federal health care law, said it’s too early to tell whether delays will hamper enrollment of hard-to-reach populations. She said research confirms that people who lack insurance are confused about what the federal law means for them.

“I think it’s one of the reasons why there’s a six-month enrollment period, because they knew that some of these groups were going to take some time,” Brodie said. “There’s also a perception that it’s going to take not just one year but multiple years until all those who are eligible for these programs and these benefits actually know about it.”

The “clipper clinic” may yet produce at least one new health plan enrollment. Cardoso, the salon owner, said she plans to sign up with navigator Miguel Rivera in the next week.