Until recently, John Henry Foster, an equipment distribution firm based in Eagan, Minn., offered its employees only a couple of health plans to choose from. That’s common in companies across America.

“They just presented what we got,” says Steve Heller, a forklift operator who has worked at John Henry Foster for 15 years.

But these days the company’s employees have dozens of choices. And something else is new: Each worker now receives money from the company (from $350 to $1,000 a month, depending on whether Heller and his co-workers are buying insurance for a single person, a couple or a family) to buy a health plan.

Employees are then directed to an online exchange — a private, secure website that offers the selection of plans for side-by-side comparison. Workers can choose high-deductible plans with relatively low monthly premiums or they can pay more each month to have more of their care and medications covered.

Just as before, the company determines the insurance companies listed, and the scope of the treatments and procedures covered by each plan.

Three years after the switch, Heller says he’s happy with his insurance and the exchange. The company’s managers are happy with it, too. 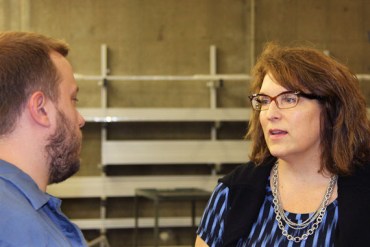 Jan Hawkins, one of the co-owners of the equipment distribution firm John Henry Foster, says going to a private exchange has given the company much more flexibility in budgeting for health care costs.
(Photo by Mark Zdechlik/MPR)

In 2012, the company was facing a big increase — 30 percent — in its costs for employee medical benefits. “Unlike anything we had ever seen before,” says Jan Hawkins, co-owner of John Henry Foster.

So, Hawkins says, company leaders decided to sign up for a private exchange run by Medica, a Minnesota insurer, because they could choose to spend only about 10 percent more on health benefits in the first year, instead of that 30 percent increase projected under the old plan.

Since then, the firm has increased the money it gives employees to spend on health insurance by roughly 10 percent each year.

“I think it definitely helps us from an operational budget standpoint,” Hawkins says. “We’ve just seen only positives from this.”

Despite the benefits to a company’s bottom line, and more choices for employees, John Henry Foster is one of relatively few businesses using a private health insurance exchange. According to research by the Kaiser Family Foundation, last year only 3 percent of employers (excluding the federal government) insure their employees this way. (Kaiser Health News is an editorially independent program of the Foundation.)

But it’s a trend that some experts expect to pick up steam soon. “I would say a majority of the companies will switch to private exchanges,” says Dr. Jim Bonnette, with the health care consulting firm The Advisory Board Co.

Bonnette thinks that employees under this sort of system are likely to choose high-deductible plans and be much more motivated than in the past to search out the best value for care. That could finally force consumers to pay attention to the price of health care, he says, a goal that has eluded health policymakers for decades.

“We can’t afford the trend — that is, the increase in cost per year — that we currently have,” Bonnette says. “So how do you get people to think differently about how they receive care and what it costs?”

It’s often difficult for consumers to find out how much a doctor visit or a particular procedure costs. And, Collins says, studies show that people with high-deductible plans often forgo care to save money; they’ll even avoid free preventive care because they don’t understand how their health insurance works.

“The idea that people who have such low understanding of what is included or excluded in their deductible can actually go out and price-shop for their health services, I think, really stretches the imagination,” she says.

Kim Wagner, a benefits consultant, says predictions of a big shift to private exchanges are overblown. Although some employers are adding more health plan choices for workers, she says, giving employees a set amount to buy insurance on an exchange could alienate workers and increase turnover.

The practice of giving employees a limited amount of money to purchase their own insurance has been around for a while, Wagner says, but “hasn’t taken off, particularly in the large employer space, because truly it’s a cost shift.”

Workers suddenly asked to shoulder more of the cost of their health care may be more likely to look for a job elsewhere — opting for companies that offer better benefits.

Nonetheless, firms that now use generous benefits as a selling point to lure top talent may soon be more motivated to set up these sorts of private insurance exchanges, too. Beginning in 2018, companies that offer health insurance packages the government deems too generous will start having to pay a 40 percent tax on those packages.

It’s called the “Cadillac” tax (meant to reduce health spending by discouraging luxurious health plans), but it is not as exclusive as its name implies. Towers Watson, a consulting firm, predicts that 48 percent of employers will have to pay the tax in its first year.

This story is part of NPR’s reporting partnership with Minnesota Public Radio and Kaiser Health News.