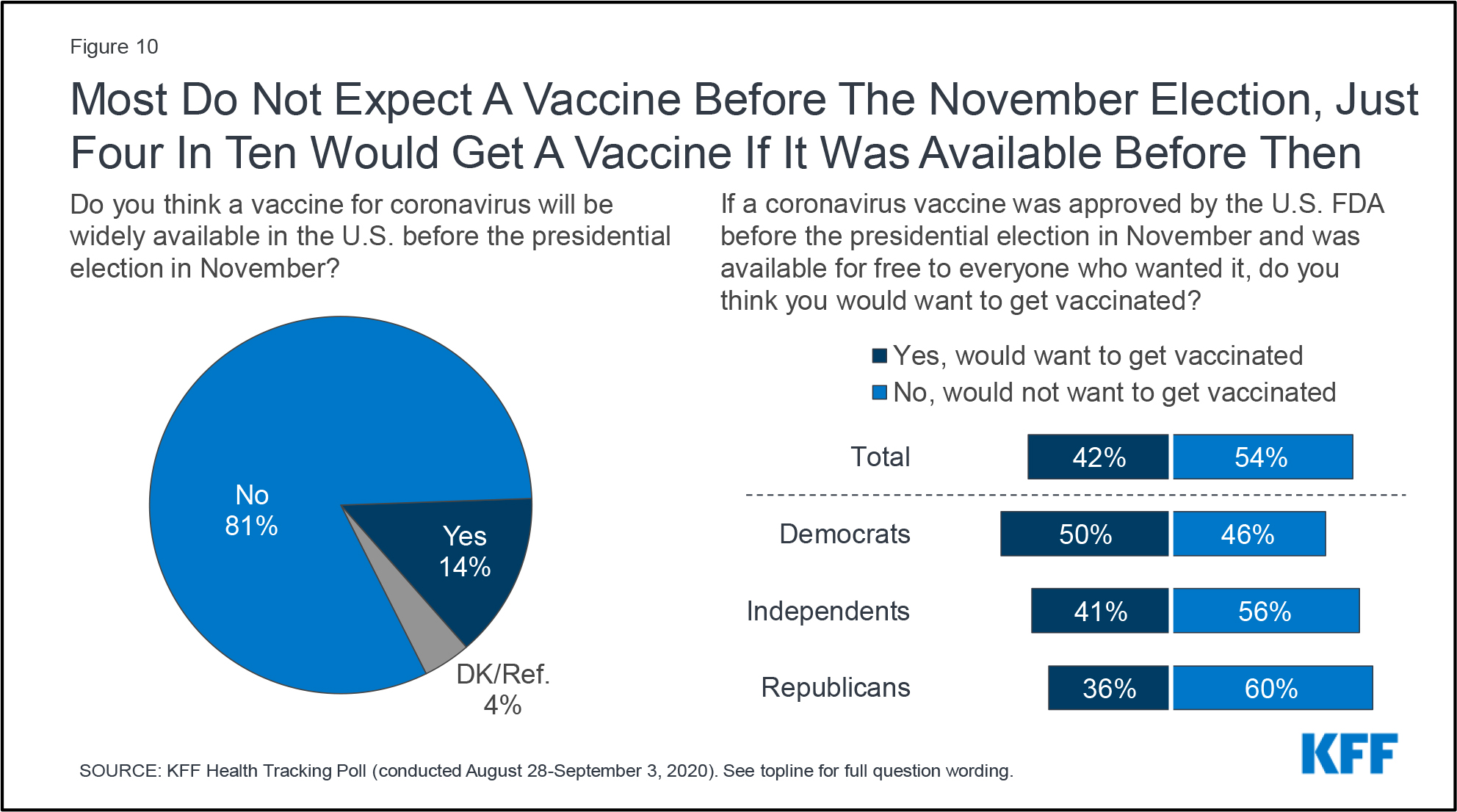 This story can be republished for free (details).
The public is deeply skeptical about any coronavirus vaccine approved before the November election, and only 42% would be willing to get a vaccine in that scenario, according to a new poll.

The results of the poll by KFF reveal widespread concern that the Trump administration will bring pressure on drug regulators to approve a vaccine before the election without ensuring it is safe and effective. (KHN is an editorially independent program of KFF.)

Six of 10 adults said they were worried the Food and Drug Administration will rush to allow a vaccine because of political pressure. The concern is held by 85% of Democrats, 35% of Republicans and 61% of independent voters.

Resistance to taking the vaccine is strong among respondents of all stripes, with 60% of Republicans saying they would not want to be inoculated if a vaccine were available before the Nov. 3 election. Among Democrats, 46% would decline the vaccine.

The wariness may reflect the ongoing political jockeying over a vaccine, and it may also be influenced by strains of general anti-vaccine sentiment in the populace. The Trump administration has suggested a vaccine could be ready by November, and the Centers for Disease Control and Prevention has instructed states to be prepared to distribute a vaccine by Nov. 1.

Democrats have raised fears that President Donald Trump is trying to accelerate vaccine approval to boost his reelection chances. Forty-three percent of the public approves of Trump’s handling of the pandemic — an improvement since July, when just a third liked his response.

Partisans are largely united in doubting that a vaccine will be available before the presidential election, with 81% expecting it will take longer. The poll found the public divided on whether the worst of the pandemic is over or still to come, although optimism has increased since July. Nearly 1 in 5 Americans said the virus, which has stricken more than 6 million and killed more than 190,000 people in the U.S., is not a major problem and won’t become one. 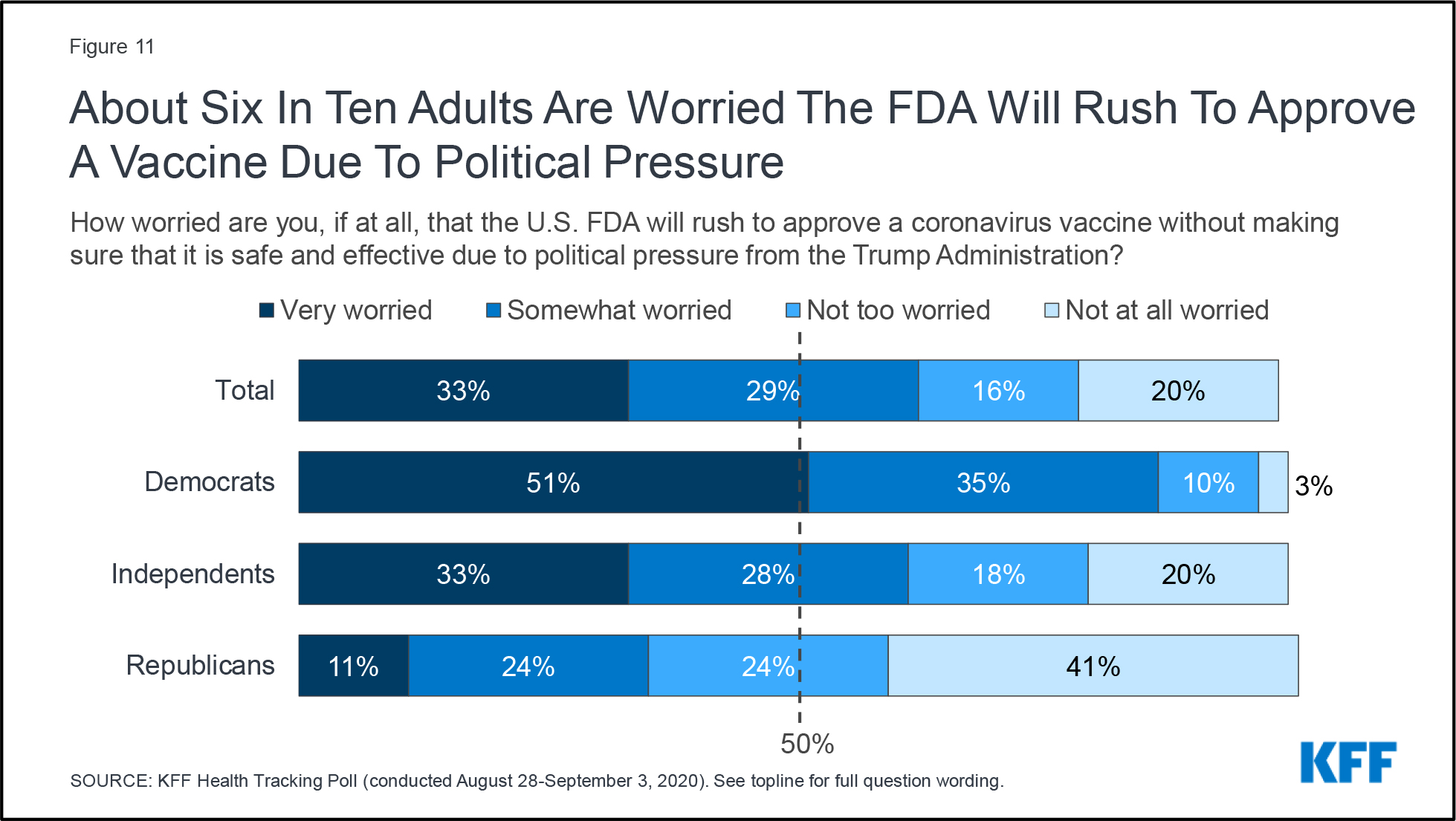 Trust in the government’s health experts and institutions has become highly partisan, the poll found. Dr. Anthony Fauci, the director of the National Institute of Allergy and Infectious Diseases, and the CDC have the widest level of trust, with more than two-thirds of Americans believing they are providing reliable information. But the credibility of both has decreased since April.

Only 48% of Republicans trust Fauci, while 70% trust Dr. Deborah Birx, the response coordinator for the White House Coronavirus Task Force, who has remained in Trump’s good graces more than has Fauci. Conversely, 86% of Democrats have confidence in Fauci while only 44% trust Birx.

Democrats still trust the CDC more than Republicans do, but more than half of Democrats say the CDC and the FDA pay too much attention to politics. Overall, only 43% of the public says the two agencies pay the appropriate amount of attention to science.

The poll also found that intense hostility to the Affordable Care Act among Republicans has decreased substantially since the 2018 midterm elections. Only 5% of Republicans in September identified repealing the ACA as the most important health issue influencing their vote, down from 18% in October 2018.

The survey found nearly half of the public holds at least one misconception about coronavirus treatment. Twenty percent said that a face mask is dangerous to wear, and 24% said hydroxychloroquine, a drug touted by Trump but not yet validated by rigorous studies, is an effective treatment for COVID-19. Just more than half of Republicans believe in hydroxychloroquine and a third say face masks are ineffective.

Fourteen percent of Americans believe there is already a cure for the coronavirus.

The telephone poll was conducted Aug. 28-Sept. 3 among a nationally representative random sample of 1,199 adults. The margin of sampling error is plus or minus 3 percentage points.

Most Adults Wary of Taking Any Vaccine Approved Before the Election